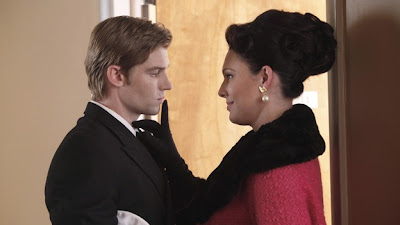 I'm finally getting caught up on episodes of Pan Am, go me! *wink* This week took the crew to Rio sans Kate (Kelli Garner), who was unexpectedly sidelined by her CIA handler Richard (Jeremy Davidson). The fallout from her liason with the handsome Yugoslavian diplomat Niko (Goran Visnjic) is about to get more difficult than she ever expected -- no longer the means to an end, Niko is her new target. And since their romance quickly heated up, Kate's about to discover just how difficult it is juggling her spy life when her heart is deeply and unexpectedly involved.
I'm probably just projecting here (HA!), but I sort of felt like Richard was a bit exasperated with Kate for getting involved with Niko. While I felt like the previous episode's "twist," where Kate slept with Niko on their first "date" was completely unnecessary and out of character (to date), Garner makes it obvious that Kate has fallen and fallen hard for the handsome diplomat. And who wouldn't? When Visnjic delivers that line at the amusement park about his thoughts being "full of her" I could've died. Too perfect. *swoon* And he tops that off by revealing his anti-communist stance -- beliefs that could cost him his freedom at the very least under Tito's regime, well I for one can't blame Kate for falling in love with a potential political martyr. Just sayin'. I'm really looking forwad to seeing how he responds to the revelation that Kate is a spy -- because even though he didn't start out as her target, he's going to assume she's been manipulating him the entire time, surely. The plucky Kate is, I think, about to discover a very personal cost to her spying larks...
Speaking of people acting out of character, it was refreshing to see Dean (Mike Vogel) start to get fed up with Ginny's (Erin Cummings) shenanigans, especially when she has no qualms about playing her lovers against each other -- a fact that Dean doesn't appreciate considering his competition, Mr. Henson (Scott Cohen), is a Pan Am VP. Dean's fling with Ginny has caused me to lose a lot of respect for the character -- she seems like such a FLAKE. And seriously, why is Dean even giving Ginny the time of day when Colette (Karine Vanasse) is around?? Colette is so much classier, and the concerned/wounded looks she casts Dean's way when watching Ginny play her little games just KILLED me. Unfortunately for Dean, his brush with fire is apt to have major consequences... 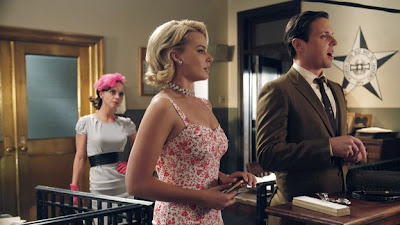 The Rio trip highlighted Maggie's (Christina Ricci) backstory, and we finally get to see what makes the most unconventional member of the crew tick. Maggie's penchant for flouting convention and authority finally catch up with her prior to this trip, as she's called on the carpet by the Pan Am brass for insubordination. With the job she perhaps didn't realize she valued so much at risk, it is revealed through flashback that Maggie got to where she is today through a lot of fast talk and charm and outright lying -- basically, doing whatever needed to be done to achieve her desired end result. Every time she's been caught in a lie or a situation she didn't want anymore, she simply moved on -- but her job as a stewardess is where she draws the proverbial line in the sand, much to her surprise.

While shopping in Rio Maggie and Laura (Margot Robbie) are hauled in to a police station for questioning after (on Laura's part, unwittingly) purchasing stolen goods. All of Laura's illusions about her erstwhile mentor and friend come crashing down as a stressed-out Maggie reveals (some of) her transgressions. It's a very telling moment for Maggie when, after the girls are "rescued" by Ted (Michael Mosley), she tearfully thanks him for "always showing up" -- a trait she sees lacking in herself? In her desperation to keep her job, Maggie turns in information Mr. Henson about Ginny, his mistress/secretary, and Dean -- and it is glaringly clear she's not proud of herself, perhaps for the first time realizing that she doesn't really like who she's allowed herself to become. I cannot WAIT to see the fallout from this for both Dean and Maggie in future episodes!

The Monte Carlo episode frustrated me because the hookups seemed like a cheap ratings ploy, out of character and out of step with the time period and tone of the show thus far. However, I will say that I like the fact that this episode appears to indicate that the show is going to explore the consequences and emotional toll of the aforementioned hookups -- something many (most?) dramas seem to dismiss as irrelevant.