Review: Sushi for One? by Camy Tang 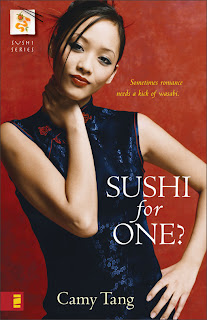 Lex Sakai's family is big, nosy, and marraige-minded. When her cousin Mariko gets married, Lex will become the oldes single female cousin in the clan.

Lex has used her Bible study class on Ephesians to compile a huge list of traits for the perfect man. But the one man she keeps running into doesn't seem to have a single quality on her list. It's only when the always-in-control Lex starts to let God take over that all the pieces of this hilarious romance finally fall into place.

Just a heads up - the back cover copy for this novel doesn't even begin to do it justice.

Volleyball fanatic Lex Sakai is single and just fine with that until she inherits the infamous family title of "Oldest Single Female Cousin" and her Grandma issues an ultimatum. She threatens to pull funding for the beloved girls volleyball team Lex coaches unless she buckles down and finds a boyfriend in time for her cousin's wedding in four months. Armed with her "Ephesians list" - requirements a guy has to meet in order to be "dateable" - Lex embarks on her quest to find a boyfriend and satisfy Grandma. Then job-wise she takes a significant pay cut, Grandma sabotages her efforts to land outside team sponsors so she can avoid the whole "dating" thing, and Aiden, the one man she's sure she should write off as unsuitable, keeps intruding on her life in unexpected ways. When her carefully constructed life comes apart at the seams, Lex is forced to re-evaluate who she's really been trusting with her future - herself or the Lord?

Probably one of the best ways to describe Sushi for One? is to think My Big Fat Greek Wedding, change the "Greek" to "Asian-American," throw in a deftly handled spiritual thread, and voila! - you have the recipe for a great chick-lit novel. Camy Tang delivers all of the humor, outrageous mishaps, witty dialogue, romance, and great food fans of the chick lit genre could wish for in spades. Lex is a wonderfully prickly, sassy heroine with a take-no-prisoners attitude towards life that masks heartbreaking hurts and fears. It's a great stroke on Tang's part to write the novel in third person instead of the first person point of view generally found in chick lit novels. While most of the novel is told from Lex's view point, the use of third person allows Tang to pepper the novel with scenes from Aiden's perspective, which walk the delicate line of being incredibly sweet without being sappy - it's wonderful to watch him fight his attraction to Lex even as he longs to be the one to break through her emotional barriers. The family dynamic is also one of the novel's greatest strengths. Lex doesn't come from the typically Christian background found in most CBA fiction - she and her best friends, also her cousins, (Trish, Venus, and Jennifer) are the only Christians in a mostly Buddhist family. Tang does a fantastic job of showing Lex negotiate the line between living her faith and being a witness and respecting her heritage and a family that doesn't understand her beliefs.

Sushi for One? is the hilarious, often poignant story of a woman who learns to cede control of her life and allow herself to be held in the arms of the God who loves her, whose plans for her life, romantic and otherwise, are far greater and more fulfilling than she could have ever dreamed. Camy Tang's debut novel shines with life and energy. I can't wait to read more about the "Sushi" cousins and thankfully the wait won't be a long one - the second novel, Only Uni, releases in February 2008!

As you can probably guess from the last line of this review, it was written a couple of years ago. :) But since Camy Tang is debuting a new series with Zondervan, I thought it was the perfect time to re-post my review of her first series, starting with Sushi for One? which I originally reviewed in October 2007.
Posted by Unknown at 5:58 PM