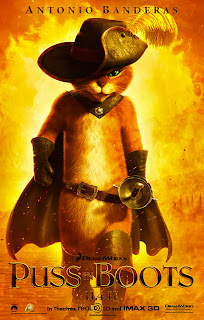 You all know how I love my fairy tales, and a well-done twist on a classic. I'm also a cat person. :) While I enjoy the Shrek films, I confess to getting rather burned out after the third one. If I'm going to revisit any of them, the main draw will be because I adore Puss in Boots. (Did I mention that I'm a major Zorro fangirl too?) So when I learned that there was a film in the works revealing the dashing Puss's backstory, I was pretty excited. On a whim Mom and I went to see the film this afternoon, and I'm happy to report that it was a thoroughly enjoyable way of breaking up a chilly afternoon.

From the opening notes of Henry Jackman's score, it's clear this film owes a huge debt to Antonio Banderas's Zorro persona. What I didn't expect, however, was the western and caper-themed movie notes woven throughout -- part fairy tale, part western, and part James Bond film (of all things), this film delves into Puss's backstory, which personally I found a heck of a lot more entertaining from start to finish than the cat's later adventures with Shrek (sorry ogre fans!).

For the western elements, we have a married Jack and Jill voiced by, of all people, Billy Bob Thornton and Amy Sedaris. The idea of Jack and Jill as murderous outlaws is quite frankly hilarious -- even moreso when you take into consideration the fact that Jack is dying to be a father (the two later decide to "adopt" their pet pigs). At one point there's a nice old-fashioned chase through desert territory, replete with high-flying heroics from our feline hero.

We also get a nice look at Puss's childhood and his friendship with fellow orphan Humpty Dumpty (Zach Galifianakis). Humpty has an unhealthy obsession with magic beans (leading to, of course, a giant's castle in the sky and a goose who lays golden eggs). Everything's peachy until Puss decides he no longer wants to live a life of crime, a betrayal his BFF Humpty deeply resents. This is where James Bond territory comes into play -- for some reason I kept thinking of Blofeld from the Bond films, particularly from the Sean Connery era. Humpty just seemed to be channeling Blofeld's petulance. *wink*

The best addition to this universe is the character of Kitty Softpaws, voiced by Salma Hayek (remind you of anyone from Goldfinger?). Kitty is the perfect foil for Puss; she can do everything he does only often faster and stealthier (she's learned to leverage her tragic past that saw her declawed to her advantage). Banderas and Hayek's give-and-take chemistry takes more than a page from Zorro's romantic history, and oddly enough also reminds me of the Depp/Cruz pairing in the fourth Pirates of the Caribbean film earlier this year.

The first Shrek film was groundbreaking animation-wise, and this film improves on its predecessor. The action sequences are really well-done, the attention to detail is superb, and the CATS ARE FRIGGIN' AWESOME. By far my favorite scene is in the underground cat club where Puss confronts Kitty -- the (G)litter Club, where the cats play instruments, indulge in decadent leche, and have dance-offs. The "litter box" dance moves were hilarious! I think there's an extra level of humor for "cat people" to appreciate in a movie like this, because the mannerisms, the little quirks of Puss's personality all speak of studying cats and nailing their personality traits.

Cute, funny, and entertaining, Puss in Boots is a must-see for all fans of fractured fairy tales, Shrek, and the like. Banderas, to his credit, really seems to relish bringing this character to life and playing with his image as a "Latin lover" -- and the results are never better or funnier as what this film delivers. Fun times. :)
Posted by Unknown at 6:17 PM

It's unlikely that I'll see this in theaters, but it does look like a fun movie. :)

@heidenkind - I was honestly thinking it would be a rental for me too, but I was really wanting to see a movie today, and so was my mom. This is what we landed on since we'd both talked about it at various points -- fun way to veg out after eating a lot. ;)

@Charity - It's definitely worth a rental. :)

My boys and I were terribly disappointed Wednesday when we saw it - and I LOVE Puss in Boots - and my littlest guy used to be PNB for DAYS and could do the most perfect immitation. Maybe we expected too much or maybe some support characters are just more awesome as support, like cayenne pepper is to a soup:( I thought some of the scenes alluded to a more mature audience also.

@bluecottonmemory - Thanks for stopping by my blog! I'm sorry you and your family were disappointed in the film, my mom and I both really enjoyed it. However, it is possible we could've felt differently had we been there with small kids -- I've always rather felt that the Shrek movies had a lot of innuendo too. Also to consider -- I enjoyed the Puss in Boot's character way more than I ever did any other character in the Shrek films -- so I thought he carried his own film pretty well.

I doubt there is a kids cartoon out there without references only the adults will get. That's what makes Phineas & Ferb so appealing to audiences both young and old, for instance.

Sounds like a great film from your description, Ruth! Hoping I'll get to see it at some point. :)

@Traxy - I know what you mean! I really enjoyed this one, hope you do too! :)