This week, the
Christian Fiction Blog Alliance
is introducing
Vigilante
Bethany House (July 1, 2011)
by
Robin Parrish
ABOUT THE AUTHOR: 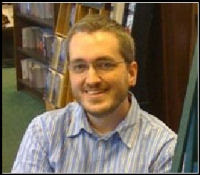 Robin Parrish wants to take you on a ride.

A wild ride -- which is exactly what you're in for when you pick up one of his books. And he's adamant that it will never be the same kind of experience twice.

Robin's stories mix, mingle, and meld various genres together to create thoroughly original suspense/thrillers. His Dominion Trilogy, for example, mashed up superhero action, secret societies, ancient myths, and an apocalyptic setting to create an entirely new take on the classic "hero's journey." Offworld mixed science fiction and an end-of-the-world scenario with high-octane action. Nightmare, his 2010 novel, is a spine-tingling examination of the world of the paranormal, paired with can't-put-it-down mystery. His 2011 novel, Vigilante, is an action-packed story about a soldier who sets out to change the world. Later this year, he's releasing his first ever Young Adult novel, titled Corridor.

Always pushing the envelope, ever on the edge of where modern storytelling is going, Robin Parrish will gladly and unapologetically tell you that he's an entertainer, a weaver of stories that ignite the mind and delight the heart. Defying labels and refusing pigeonholes, his imagination is fueled by the possibilities of asking "What if…?", and as anyone who's read his work knows, he has a very big imagination.

His influences as a novelist range from television and film storytellers like Joss Whedon and J.J. Abrams, to masters of the modern myth like J.R.R. Tolkien and C.S. Lewis. Akin to Philip K. Dick's search for the meaning of identity, most of what Robin writes about boils down to his own ponderings and examinations of just what this thing we call "existence" is.

Robin is a full time writer. He and his wife Karen and two children live in High Point, NC.

"Robin Parrish is a keen-eyed, passionate pop cultural savant, whose writing is as incisive and insightful as it is entertaining."

Nolan Gray is an elite soldier, skilled in all forms of combat. After years fighting on foreign battlefields, witnessing unspeakable evils and atrocities firsthand, a world-weary Nolan returns home to find it just as corrupt as the war zones. Everywhere he looks, there's pain and cruelty. Society is being destroyed by wicked men who don't care who they make suffer or destroy.

Nolan decides to do what no one else can, what no one has ever attempted. He will defend the helpless. He will tear down the wicked. He will wage a one-man war on the heart of man, and he won't stop until the world is the way it should be.

The wicked have had their day. Morality's time has come. In a culture starving for a hero, can one extraordinary man make things right?

If you would like to read the first chapter of Vigilante, go HERE.
Posted by Unknown at 11:06 AM