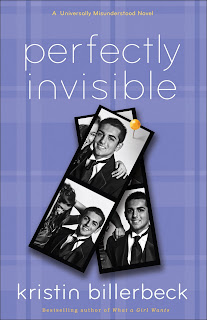 It's Daisy Crispin's final semester of high school, and she plans to make it count. Her long-awaited freedom is mere months away, and her big plans for college loom in the future. Everything is under control.

Her boyfriend is treating her like she's invisible, and her best friend is selling bad costume jewelry in the school quad--and hanging out with her boyfriend. To top it off, Daisy's major humiliation for the year will be remembered in the yearbook for all eternity. It's enough to make her wonder if maybe being invisible isn't so bad after all.

Can Daisy get her life back on track? Or is she stuck in this town forever?

With three months left in high school, Daisy Crispin knows she has little time if she hopes to permanently reverse her reputation as the school's social pariah. She has a partial scholarship to an elite university lined up and the interest of a handsome foreign exchange student. Life is look up - or did she speak too soon? Before Daisy can say "Class of 2011," her crush is ignoring her, her job falls victim to the recession, and her ultra-conservative, flaky parents squash her dreams of making university a reality (and move her into their garage). Her quest to be known is succeeding for all the wrong reasons in a spectacular fashion. Before the year ends, Daisy has some eye-opening lessons to learn on the subject of perception versus reality if she has any hope of a normal life post-high school.

Daisy's introduction in Perfectly Dateless was a fresh, funny, and authentic slice of teenage angst and drama shot through with solid truths. Her second adventure, while retaining much of Daisy's fresh, honest voice, gets bogged down by an increased dose of negativity and whininess. I love a healthy dose of snarky humor, but Daisy seems to have lost all the personal ground she gained in Dateless, instead reverting to levels of self-centeredness and self-pity that are more than a bit off-putting.

Despite my issues with Daisy's near-constant and unproductive moaning about her unfortunate lot in life, Perfectly Invisible isn't without its charms. The pacing and story flow are noticeably improved in comparison to its predecessor. Billerbeck maintains her gift for capturing a realistic, snarky-but-(generally) likeable teen voice. And while Daisy's parents are so ultra-conservative they unfortunately border too often on caricatures, when it comes to her teenage heroine Billerbeck is a master at balancing cultural relevance with genuine faith. One hopes that if we get to follow Daisy's adventures to college, some of the lessons she learns here stick.
Posted by Unknown at 11:48 AM