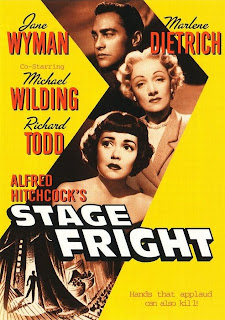 I have always considered myself an ﻿aficionada of Alfred Hitchcock's films, but somehow 1950's Stage Fright completely escaped my notice until I caught a recent airing on TCM. Though not quite on par with Hitchcock masterpieces like Rear Window or North by Northwest, Stage Fright is a fine example of the director's "lighter efforts," exhibiting an utterly charming, distinctly British sensibility. The delightfully dry, understated humor in the script combine with Hitchcock's signature flair for suspense, resulting in a droll, appealing slice of 1950s cinema.
The film opens with a "curtain" raising on the city of London, a blatant signal that everything which follows is a fiction. But the question is, does that fiction operate according to the usual filmmaking "rules"? Hitchcock starts the action immediately, cutting to Eve Gill (Jane Wyman) and Jonathan Cooper (Richard Todd) fleeing the city. Jonathan confesses to Eve that he's the secret lover of Charlotte Inwood (Marlene Dietrich) a popular and married actress. In flashback Jonathan narrates the events that brought him to Eve for help - Charlotte came to his apartment wearing a bloodstained dress, frantic after killing her husband during an argument. Jonathan agreed to return to her home to procure a fresh gown, and while attempting to stage a fake robbery is spotted by Charlotte's maid, Nellie Goode (Kay Walsh) - and now he's the police's number one suspect.
Eve, an aspiring actress, has long been in love with Jonathan, and determines to get her father the Commodore's (Alastair Sim) assistance in clearing Jonathan's name (and perhaps in the process at long last turning his affections toward herself). What follows is a thoroughly enjoyable mix of humor, heart, mystery, and suspense, delivered with a deftness of touch and a finesse like only Hitchcock could deliver. This is a cast that works really well together, and is one of the movie's biggest strengths - perhaps all the more notable because it was peopled with performers that weren't part of Hitchcock's list of usual "suspects" (i.e. Jimmy Stewart, Cary Grant, Grace Kelly, etc.). Stage Fright was the first almost entirely British film - filming locations and cast (with the exceptions of Wyman and Dietrich) that Hitchcock had made since the 1930s, lending it a feel and flavor rarely since in full force during his Hollywood tenure.
I've never really been a big Jane Wyman fan, probably because my exposure to her work has been limited to her roles in soapy, melodramatic films like Magnificent Obsession, All That Heaven Allows, and Miracle in the Rain. The character of Eve is by contrast a revelation - Wyman plays the wide-eyed, determined ingenue with a touch of spunk and an affinity for comedy (especially when Eve masquerades as a dowdy lady's maid to spy on Charlotte) that I never would've suspected. Stage Fright is perhaps the loveliest I've ever seen Wyman on film, and she brings a warmth and humor to the production that play extraordinarily well in the context of the story.
As Eve's crush Jonathan, Richard Todd is absolutely fantastic. My earliest memories of Todd go back to my childhood, when I watched his Disney films (The Story of Robin Hood, The Sword and the Rose, and Rob Roy) endlessly, and developed a huge crush on his classic good looks and boyish charm. Hitchcock puts those qualities to excellent use here. It's easy to see why Eve loves him, but should she is another matter entirely - there's an unsettling tension and energy underscoring Todd's performance that explodes in the final scenes in a wholly satisfying and surprisingly creepy manner.
The cast is liberally peppered with great British acting talent in memorable character roles, among them Kay Walsh as the hard-nosed maid Nellie with a propensity for blackmail, Joyce Grenfell in a hilarious scene as a carnival booth operator, and even Hitchcock's own daughter Patricia as "Chubby" Bannister, one of Eve's friends and a fellow student. But the award for the best and most hilarious performance must go to Alastair Sim as Commodore Gill, Eve's father and partner in crime (the crime being their amateur criminal investigation). I suspect Sim is perhaps most familiar (to American audiences, anyway) for his turn as Ebenezer Scrooge in the 1951 production of A Christmas Carol. As the Commodore, Sim is hysterically funny, practically stealing every scene in which he appears. Eve's somewhat unconventional father absolutely relishes anything that smacks of a slightly unsavory scandal, loves the idea of having a less-than-stellar reputation, and does everything he can to support his daughter's investigation - all with a delightfully droll, witty British sensibility.
I've always been rather ambivalent about Dietrich, and to be quite honest it's a little freaky how eerily "ageless" she appears in this film. But it's undeniable that she is probably the perfect foil for Wyman's Eve. Cold and icy, brittle and calculating, Dietrich's Charlotte is the antithesis of everything Eve represents - and quite frankly it's kind of fun to watch her mack for the camera and unravel as the film heads towards its climax. She even gets a Cole Porter penned song ("The Laziest Gal in Town"), a lyric that is deliciously ironic when considered in the contex of the film (and, according to the "making of" featurette included on the DVD, a number she regularly resurrected in her shows years later). 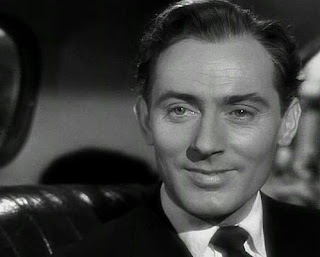 My absolute favorite part of this film is any scene featuring Michael Wilding (also known as Elizabeth Taylor's second husband) as "Ordinary" Smith, the detective investigating the murder of Charlotte's husband. Now I've seen Wilding in a handful of films (Torch Song, The Egyptian, and The Glass Slipper), and while he was good in those films, those characters didn't make me sit up and take notice of his urbane good looks and delicious voice. As the sweet and a bit shy Smith, Wilding is positively delightful. DELIGHTFUL, I tell you! The "meet cute" with Eve is just too adorable for words - and the fact that he basically loves her from the moment they meet? Be still my heart. :)
Spoilers...There is apparently some controversy about this film due to Hitchcock's decision to open with Jonathan's "lying flashback" (a decision he later regretted according to the "making of" documentary). After spending some time mulling over this storytelling technique, I've got to conclude that the decision to tell the story of the murder from the point-of-view of an unreliable narrator was perhaps ahead of its time, but ultimately serves the film well and makes the final "reveal" of Jonathan's true nature all the more chilling. As an audience we're used to a film being presented as "reality" from start to finish - but by raising the curtain on London over the opening credits signals the film's awareness that it is a fiction - and the lying flashback is an interesting method of messing with audience expectations and perceptions of the action playing out on-screen.
While it lacks some of the finesse and sophistication of other Hitchcock classics, Stage Fright is an entertaining, quirky, character-driven piece that I'm happy to have finally discovered. If you're a fan of Hitchcock's work - especially if you enjoy the "lighter" films like To Catch a Thief or The Trouble with Harry, this is a diverting little gem that is worth checking out, probably moreso because if my experience is any indication, it's been sadly overlooked!
Purchase Stage Fright on DVD.
Other Hitchcock films I've reviewed:
Posted by Unknown at 11:58 AM

OMS, A Christmas Carol is my dad's (and mine) favorite Christmas film ever - and Alastair Sim is our *favorite* Scrooge. We were just talking the other day about if he ever did any other films. Have to tell him about this! :-)

@Alexandra - An Alastair Sim fan? My post is quite timely, LOL!

I've only seen Jane Wyman in one film- Three Guys Named Mike. I have the Alastair Sim "Christmas Carol" on DVD as part of a set, but I haven't watched it yet...

I absolutely ADORE Hitchcock films. This was actually the first one of his films that I ever watched. At first I imagined that it was the best, but after seeing almost every other film he's made this naturally fell down the list. Rebecca is probably my favorite followed by Notorious, and Spellbound. I much more prefer his earlier works as opposed to the later favorites such as Marnie and Vertigo.

@Kristin - You should definitely check this film out why you get a chance! I haven't seen that Wyman film you mention, I'll have to keep an eye out for it on TCM.

@LitLover - Notorious and Rebecca are also favorites of mine! I don't care for Marnie, but I do enjoy Vertigo (in moderation). :)

Hey, Ruth! I just watched this for #Hitchfest and everyone loved it. It was a little confusing because the unreliable narrator aspect, but I agree completely that this is definitely one of Hitchcock's overlooked films. And I loved Michael Wilding, too! He really was sweet and very attractive as Smith.

Thank you so much for recommending the movie for us to watch!

@heidenkind - Sorry I'm so late in responding to your comment! I'm so thrilled to hear that everyone enjoyed 'Stage Fright' for #Hitchfest! That's awesome!