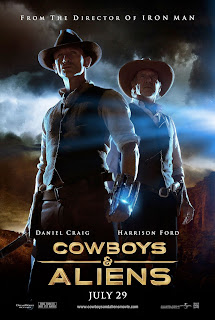 Last night I went to see Cowboys & Aliens, and let me tell you this movie may just be the surprise of my summer. Despite my long-term love affairs with Daniel Craig and Harrison Ford, and my deep appreciation of director Jon Favreau's work with the Iron Man films, I had extremely LOW expectations for this movie. I wasn't sure how the film's high-concept, genre-bending goal would play out on-screen. Amazingly enough - and perhaps because they played to the conventions of the western genre so well - the film manages to work. Cowboys & Aliens plays it straight when it comes to the western - this is a western so western John Ford would recognize it, that just happens to feature hostile aliens (as opposed to any of the western's traditional "big bads"). 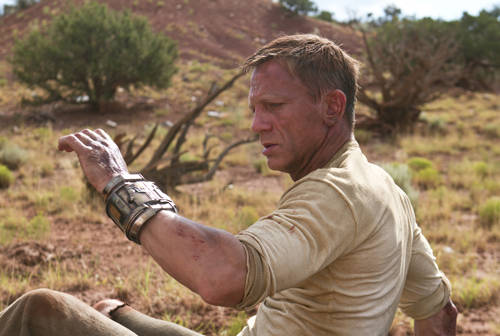 Craig is the mysterious stranger, who wakes up in the desert with no memory of his past and a mysterious shackle on one wrist. After acquiring the necessary trappings - boots, gun, horse, and the requisite scruffy and loyal dog - he rides into the desolate (and aptly) named Absolution. But Absolution is a town that doesn't welcome strangers, and lives in fear of crossing the wealthy and iron-willed Woodrow Dolarhyde (Ford). The stranger quickly makes powerful enemies when he crosses Dolarhyde's wastrel son Percy (Paul Dano), an idiot with an entitlement complex (Dano played the inventor Simon Feck in Knight and Day). Like some of my favorite westerns, the idea of complex father/son relationships and the search for redemption play large roles in this character-driven drama's storyline. 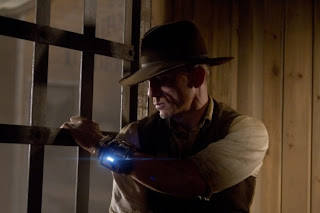 Daniel Craig was MADE for the trappings of the western. Fifty years ago, he would have been a staple of the western film genre. Not only does he have the look nailed (a fact I greatly appreciated), but he owns the manner and the attitude. He can say more with a look than most actors can say with pages of script. He brings the same intensity and depth to the role of amnesiac outlaw Jake Lonergan that allowed him to reinvent Bond in Casino Royale. What I loved about Jake - besides the fact that Daniel Craig's blue eyes shine all the brighter for the layer of dirt he's covered in for the film - is the way his experience with the aliens, his amnesia, gives him the opportunity to start over. It's emblematic of why so many people journeyed west -the chance for a fresh start, the opportunity to reinvent yourself uninhibited, or perhaps in spite of? - by the shackles of past sins. 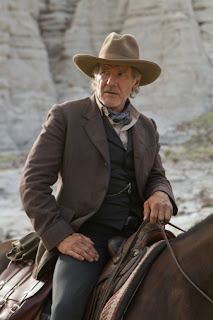 I love Harrison Ford (hello Indy and Han!), but he's been so defined by those franchises sometimes it's difficult to see him in a role and not project either of his two most famous personas on the current role. His turn as Dolarhyde really makes me wish he'd had the opportunity to make more westerns in the last ten years or so - Ford fits in the genre so comfortably, one is able to forget for the length of the film that he is best known as adventurer Indiana Jones or roguish space captain Han Solo. I absolutely loved Dolarhyde's troublesome family relationships. It really reminded me of Robert Mitchum's character in the fabulous Home from the Hill, and the conflict that arises between his son and the unacknowledged, illegitimate son who desperately longs for his father's approval and affirmation. In this case, you have Dolarhyde's over-indulged and spoiled son Percy, and Nat Colorado (Adam Beach), the orphaned Indian boy Dolarhyde took in, who views the hard-nosed rancher as a surrogate father. Ford starts out as quite unlikable, and over the course of the film and the experiences his character endures softens, transforming him into a leader worthy of respect. 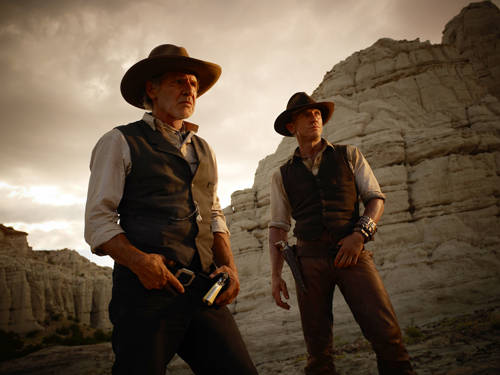 Ford and Craig play off each other so incredibly well in this movie. There are several occasions where they just look at each other, and don't have to say a word because their expressions say it all, and it is hilarious. The quirk of a mouth, the lift of an eyebrow, and like the best leading men in classic westerns they make know their intentions. How their characters move from distrust and animosity (in Jake's pre-alien encounter life, he robbed a stagecoach carrying Dolarhyde's gold) to mutual respect, and dare I say it - liking each other, is a lot of fun to watch unfold. The alien threat forces them to become allies, and over the course of the film they both gain a fresh start - absolution, if you will, for their pasts. 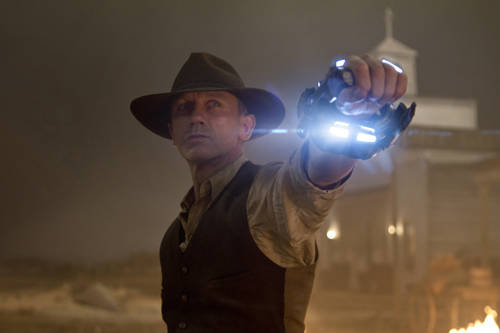 I suppose I should mention the aliens. Honestly, they were completely incidental to my enjoyment of the film. The whole concept worked because the filmmakers played the fantastical alien incursion so straight. This wasn't like a steampunk or even sci-fi western, this was a straightforward western where the adversary of choice just happened to be really revolting, disgusting, gold-seeking aliens. Ultimately, its the seriousness with which the film takes the conventions of the western genre that allow the high-concept alien-incursion thing to work. The townsmen and their eventual native allies view the aliens and fight them in ways that feel completely authentic to the 1870s setting. 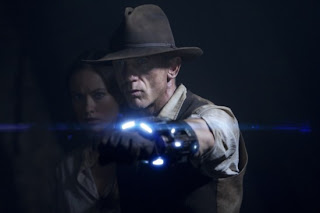 I've never really been a fan of Olivia Wilde, but as the mysterious traveler Ella, who knows a lot more about the aliens than she's willing to divulge, she works really well. She has this angular, slightly hardened look that fits the rigors of the time period in quite an authentic manner. I really loved the way the film introduces Alice (Abigail Spencer), the woman Jake leaves his life of crime for, but only after one last score - one last score that makes them a target, ultimately resulting in Alice's death. As his memory gradually returns, that burden of guilt and the empathy Ella's past allows her to provide, sets the stage for a tenuous relationship that faces certain death in the best "against all odds" convention of the western film. 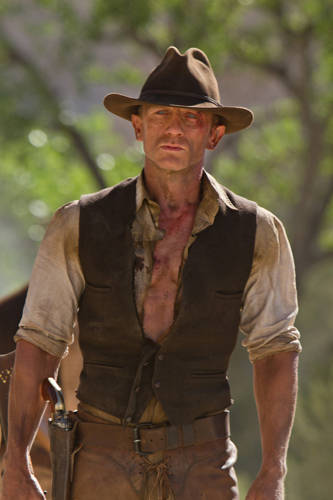 A few other quick performance notes - Clancy Brown turns in a memorable performance as the gun-toting town preacher Meacham. Keith Carradine is terrific as Absolution's Sheriff Taggart, who owes his job to Dolarhyde but desperately wants to do the right thing for the townspeople, in spite of the pressure of his benefactor's heavy-handed patronage. Sam Rockwell is fantastic and funny as the put-upon Doc, the saloonkeeper who longs for the respect of the town and wants nothing more than to be a hero to his wife. And in a blink-and-you'll miss him role, Brendan Wayne, grandson of John, makes his big-screen western debut as Charlie Lyle, one of Taggart's deputies (look for him in the saloon fight towards the beginning of the film). 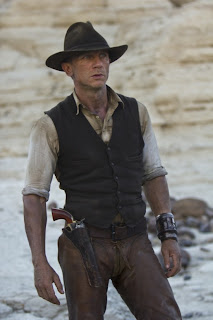 Full of glorious western vistas (shot mostly in New Mexico) and packed with slickly-produced action sequences (I loved the creepy, displaced riverboat scenes), Cowboys & Aliens is a thoroughly enjoyable entry in the western film genre. The aliens are revolting, and a stark reminder of why I am never going to be a fan of straight alien flicks, but the western sequences are so wonderfully realized and its that gritty, persevering spirit that pervades the film and leaves a lasting impression. Kudos to Favreau and his co-producers (among them Steven Spielberg and Ron Howard) for making this high-concept genre-mashing idea work (for me, at any rate). Oh, and Harry Gregson-Williams a fantastic score that evokes the spirit of classic westerns of the past.

Filled with a smart sensibility towards the conventions of film westerns and a deliciously funny, self-deprecating sense of humor, Cowboys & Aliens is a surprisingly well-realized, wildly entertaining adventure. If you've seen it, I'd love to hear your thoughts!
Posted by Unknown at 9:48 AM

I'll be honest: I saw this movie because of Daniel Craig. I, too, loved him in James Bond (a Bond with emotional depth and inner conflict? Yes, please!). I didn't think it was the most amazing movie ever, but I thoroughly enjoyed it. I think my favorite scene was when Jake remembers his past because it was just so well acted. It made me want to see True Grit again.

Thanks for the review (and all the pictures of Daniel Craig ;) )!

I so want to see this movie! I've been waiting months for it to come out and I'll have to wait a few more for it to be released to DVD since I can't exactly get to the theaters right now. :( But it looks so cool! And the two leads, Daniel Craig and Harrison Ford, look so grand together in the ads so I'm really keen to see it. Great review by the way! ;)

Oh, is there anything weird in the movie in the area of oh, scantily clad females or bedroom scenes? I just like a heads-up on those areas so I can fast forward them. ;)

I was on the fence about this movie, but you wrote such a fantastic review I think I'll take the family to see this one. You think 11 year old boys will like it?

Great review. Now if I can just talk my girlie girls into seeing it.

Sorry, but I thought this movie was pretty boring! The only good thing in the entire movie was Harrison Ford. Daniel Craig's US accent was so lame. I laughed a few times but I don't think at the parts they wanted me to.

@Read the Book - Glad you enjoyed this movie too! Craig was FABULOUS in that scene where Jake remembers his past - loved it. (And you're welcome for the pics!) :)

@Elaine - Thanks! Let's see, there is one scene where Olivia Wilde's character is "resurrected" sans clothes, but you just see her back - other than that, there is violence in the film, so that's my biggest caution.

@Joy - It really depends I think on what your 11 year olds are used to seeing action/violence-wise in movies...so that's hard for me to make the call there... :/

@Jenny - Thanks! Just show them some Daniel Craig pics... ;)

@heidenkind - :( Sorry you didn't like it! I agree, thank goodness Daniel Craig didn't speak more than absolutely necessary. Let's talk about ZEN instead! :)