Review: A Study in Ashes by Emma Jane Holloway 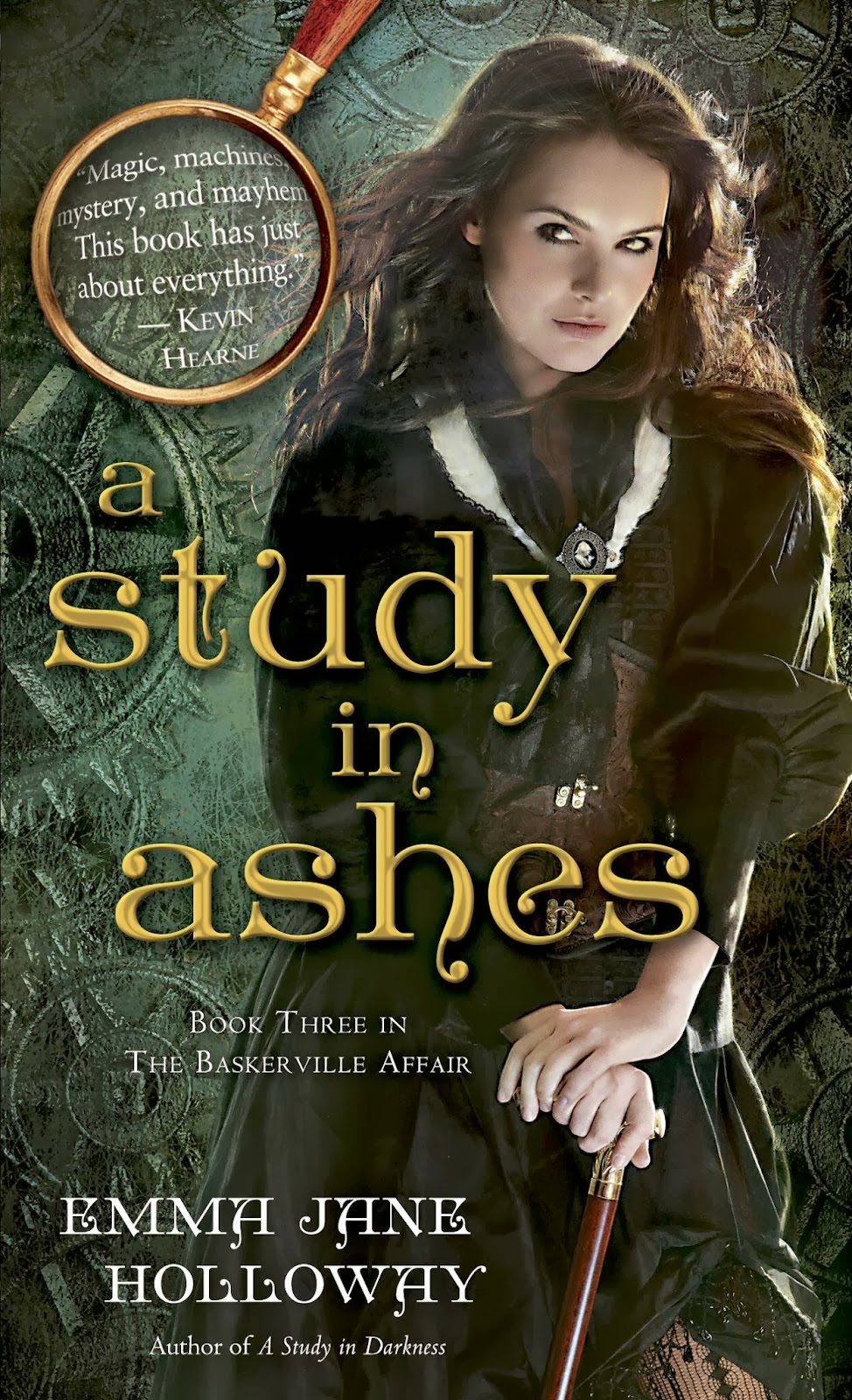 A year has passed since the events that unfolded at the end of A Study in Darkness changed Evelina Cooper's world forever. Left emotionally gutted by the loss of her pirate-love Nick, the disaster that left her best friend, Imogen, in a coma-like state, and captive to the steam baron Jasper Keating's every whim, Evelina's once bright future has dimmed beyond recognition. Held captive to the grounds of the Ladies' College, Evelina chafes at Keating's restraints even as she despairs of ever escaping his clutches -- and worst of all, even if she did, without Nick and Imogen the idea of a future free from Keating's machinations holds little appeal. But her uncle, the ever-resourceful Sherlock Holmes, refuses to accept the idea that Evelina's life is forever sacrificed in service to a ruthless steam baron. When he's approached by Imogen's younger sister, Poppy, the girl desperate to find a cure to restore the soul to her sister's lifeless form, he sets in motion a daring plan to free his niece from Keating's clutches, once again able to use her magical abilities without fear and with the hope of seeing her friend restored.

But there is more afoot than Keating's desire to become first among the steam barons, using Evelina's gifts to wed magic to machines. Queen Victoria's last heir lies close to death, and rumors of poison and a son, long-hidden as insurance against the barons' schemes for absolute power come to light, and as those rumors spread the embers of rebellion fan into a flame. The people rally to the cry of "Baskerville!" and a mysterious Schoolmaster with an enigmatic smile and a charismatic spirit emerges as the movement's leader, gathering to him the disaffected and persecuted, makers and average citizens alike, bound together by the common hunger for freedom. While Evelina, in her bid for freedom, finds herself recruited to the Baskerville cause, her one-time love Tobias dances on the edge of a precipice, torn between protecting his new family or the danger that will come if he sacrifices security for principles. And deep within an enchanted long-case clock, and the hell that is one of the Scarlet King's prisons, two souls once thought lost forever make their own desperate bids for freedom. As rebel forces descend on London, Evelina and her friends risk everything to see themselves and their country freed forever from the steam barons' iron grasp -- but the marriage of magic and machine is dangerously unpredictable, and unless Evelina can come to terms with her power and potential, all may yet be lost to new enemies and new threats, wilier still than the steam barons of old.

Emma Jane Holloway's Baskerville trilogy has been a glorious surprise, each volume an improvement in showcasing her seemingly boundless imagination, world-building, and gift for penning heartfelt, memorable characters. Here everything -- and I mean literally EVERYTHING -- comes full circle with nary a thread to my remembrance dropped in error, resulting in a wholly satisfying, occasionally heart-wrenching, conclusion to Evelina's story. But by now this trilogy is about so much more than Evelina and her quest to unite the dual halves of her personality, the mechanical and the magical. Her friends and enemies each take their turn stealing center stage, becoming heroes in their own right or deliciously irredeemable villains one loves to hate.

This is at once both Holloway's greatest strength, delivering a satisfying conclusion for her fans, but also illustrative of the series' greatest weakness. Holloway isn't afraid of going big and reaching for the stars when it comes to her storytelling, and here she goes bigger than ever before, delivering a conclusion to her steampunk version of Sherlock's London that is grander and more ambitious in scope than anything that's come before -- but it's also over a hundred pages longer than each of the previous two volumes. Now I pretty much adored this book and love this series, but I can't help but feel that with some careful editing, allowing for more seamless transitions between the different points-of-view and varied story threads that this volume of the trilogy would've been even more pulse-pounding and exhilarating.

More than ever before here Holloway dives deep into the lives of her supporting characters -- Toby, Imogen, and now Poppy, the latter little more than set dressing until circumstances here allowed her to shine and reveal her spark. I loved Poppy's moxie, her desperation to save her sister and her bravery in defying her father's expectations. Until the end of A Study in Darkness, Poppy's older, frailer sister Imogen was overshadowed by Evelina. But here -- separated from not only those she loves but her very body, forced to confront evil personified in the form of her insane twin, Imogen becomes a heroine in her own right. Her chapters have the flavor of a steampunk version of Alice in Wonderland, and I loved the charm of her love story with toymaker Bucky Penner. The final Roth sibling, Tobias, broke my heart here. The charming rake has become a man divided, tormented by his choices and desperately seeking redemption -- and in a bold move (hopefully the set-up for a sequel series) he becomes a force to be reckoned with.

I loved how Holloway wove nods to the original The Hound of the Baskervilles story throughout Evelina's story arc, an association only hinted at in the first two volumes coming full circle here. While I've enjoyed seeing Holloway play a bit fast and loose with the Holmes canon in the first two books, I was completely entertained by her take Doyle's classic novel. Given the scientific nature of her steampunk world, I also have to wonder if her version of the famous hound's origin story was in any way influenced by the Sherlock episode The Hounds of Baskerville as there are one or two fascinating parallels that could be drawn between the two. As the tipping point for revolution, precipitating Evelina's own crisis of conscience regarding light and dark magic, the revelation of every detail concerning the multi-layered Baskerville plotline is a rewarding experience for both fans of Sherlock and high adventure.

A Study in Ashes overflows with Holloway's signature humor and apparently boundless imagination. While I do think this would be an even stronger conclusion if it was somewhat shorter in length, I cannot deny that I was nevertheless enthralled by Holloway's spectacular conclusion to the infamous Baskerville Affair. This trilogy has become so much more than just Evelina's story by this point, and the scope and spectacle of this final act is a breathtaking entertainment on all fronts. The stakes are high, and be forewarned -- Holloway is an author who isn't afraid to break a reader's heart -- but the rewards are worth it. The magic, romance, and mystery of the first volumes come full circle, leaving me desperate for a sequel series -- because there just has to be a sequel series. PLEASE?! :) A Study in Ashes is very well-done, a journey worth the wait and a one I'm thrilled to have experienced.

As part of her devil’s bargain with the industrial steam barons, Evelina Cooper is finally enrolled in the Ladies’ College of London. However, she’s attending as the Gold King’s pet magician, handcuffed and forbidden contact with even her closest relation, the detective Sherlock Holmes.

But Evelina’s problems are only part of a larger war. The Baskerville affair is finally coming to light, and the rebels are making their move to wrest power from the barons and restore it to Queen Victoria. Missing heirs and nightmare hounds are the order of the day—or at least that’s what Dr. Watson is telling the press.

But their plans are doomed unless Evelina escapes to unite her magic with the rebels’ machines—and even then her powers aren’t what they used to be. A sorcerer has awakened a dark hunger in Evelina’s soul, and only he can keep her from endangering them all. The only problem is . . . he’s dead.
Posted by Unknown at 4:44 PM