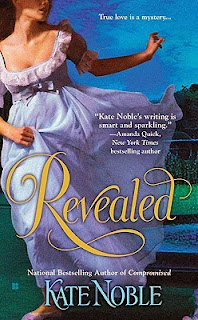 Kate Noble's contribution to A Grosvenor Square Christmas was one of the highlights of that anthology, and having enjoyed "The Last First Kiss" so much I resolved to try her full-length fiction immediately. The widowed Phillippa Benning is a -- if not the -- leading light of the ton. Having quickly married -- and then just as quickly widowed -- and now in control of her fortune Phillippa is determined to revel in the freedom afforded her as a widow of means. She's sure she'll eventually remarry...but not before she enjoys the latest Season (and all the opportunities it affords for romantic liasons) to the hilt. She's determined to add the recently arrived, very handsome and eligible, Marquis of Broughton as a romantic conquest, but her calculated plans to win Broughton are interrupted when she accidentally overhears talk of a deliciously different sort -- the identity of the infamous Blue Raven, the British spy whose work in the recently concluded fight against Napoleon and the French captivated English imaginations. If she could reveal the Blue Raven's identity at her annual ball, her status as queen of the ton would be undisputed, her social triumphs legendary. But the Raven has one more mission to fulfill, and when danger crosses Phillippa's path she finds that it's not only her life that's in peril -- but her heart, and to the last man she ever expected to win it.

Mr. Marcus Worth, third son of a minor baron, has found his work in the War Department extraordinarily unfulfilling since the cessation of hostilities with France. But when he uncovers fantastic rumors of a leak in the department and the resurrection of the Blue Raven's most infamous opponent, a maniacal killer long thought dead, it may just be time to resurrect a legend. He didn't count on Phillippa Benning overhearing his plans, much less needing her cooperation to facilitate his entrée to the Season's most exclusive (and targeted) social events. Beneath Phillippa's sparkling social reputation, Marcus discovers a whip-smart, funny woman whose assistance proves more of an asset than he'd ever dreamed. But as they come ever closer to uncovering a traitorous plot, will he have the courage to reveal the truth about his identity before his deception loses him any chance at a future with Phillippa forever?

People...I LOVED THIS BOOK! While Noble's second novel, this is the first in her Blue Raven sequence, and I took the chance on starting here and I'm SO glad I did. This book is everything I love about historicals -- witty banter, pulse-pounding romance, and SPIES! Revealed is a heady blend of Austen-esque relationships and the intrigue, flair, and romance of Barness Orczy's The Scarlet Pimpernel. I was rather afraid I'd be in for a stereotypical romance -- heavy on the love scenes and light on the character development -- but after falling in love with Noble's short fiction I'm happy to see Revealed prove my instincts right. This is an author who takes her tagline of "deeply romantic historicals" seriously, and in the best possible fashion!

I was a bit concerned upon starting this novel that I'd never come to really like its leading lady. Phillippa Benning is strongly reminiscent of another slightly officious heroine -- Jane Austen's Emma. And while I love me some Emma, at first blush Phillippa lacked that character's biggest redeeming quality -- while Emma is generally well-meaning and desirous of helping others, Phillippa is most concerned with advancing her social standing and doesn't care who she cuts or hurts on the way to achieving that aim. But as the story progresses, I quickly warmed to Noble's characterization, as it is revealed that Phillippa's society persona is a deliberate mask. Yes, she loves the trappings of wealth and revels in social intrigue (her unabashed material side becomes rather endearing), but her ice queen persona masks a woman deeply afraid of revealing her true self, afraid of the commitment and risk of rejection that such honesty invites.

And that is precisely why an unassuming third son of a minor baron is this social butterfly's perfect match! When telling a friend about this book, I described Marcus as a sort of geeky, Regency-era James Bond -- and does it get any better than that? I think not. *wink* I loved the slow-burning development of their relationship, how the two become first unlikely allies, then friends, and how he actually sees her as more than just the queen of the ton. His good humor softens her acerbic reputation, and her faith in a legend makes him more than a bureaucratic paper-pusher, but a man capable of changing the fate of an empire. They are SO PERFECT (and I will never, ever cease to swoon when I read the words "it's just me" -- never has such a simple phrase meant so much! SO MUCH BOOK-LOVE HERE, PEOPLE!!).

I adore a good spy story as much as a romance, and Revealed was an unexpectedly welcome, fantastic blend of the two. Noble has a wonderful grasp of the period's manners and mores, and with a healthy dash of derring-do thanks to the Black Raven legend, I was quickly lost -- completely and utterly captivated by Marcus and Phillippa's story. I adored Noble's fully-realized characters, carefully-crafted romance (and appreciated the fact that she actually develops a relationship between her leads, as they don't consummate the relationship until nearly three-quarters of the way through the book), and the warmth and humor with which she brings her story to life. She deftly balancing the suspense and political intrigue of the time with two people learning a potent lesson about the oft-times deceptive nature of appearances, and the reward of looking to the heart beneath the mask of social artifice. Peopled with a host of entertaining supporting players, particularly Totty and Lady Jane, Phillippa's avowed nemesis-turned-frenemy, and Marcus's deliciously angst-ridden brother, Byrne, I cannot wait to dive into the second volume of this series -- The Summer of You. I've rarely been so happy to discover an author's backlist. Revealed is entertaining escapism at its finest, with a swoon-worthy hero and a romance I adored -- the perfect read to start the new year!

From the acclaimed author of Compromised comes a tale of love and war among the ton.

Phillippa Benning is the unrivaled beauty of the Season. But when another lady challenges her for a marquis's attentions, Phillippa entices him to a secret rendezvous only to stumble upon The Blue Raven, England's most famous spy, lurking at the site of her planned tryst.

The Blue Raven has uncovered an enemy plot directed at upcoming society functions, but he's unable to infiltrate London society. Phillippa makes an offer: in exchange for entrée among the ton, he agrees to have his true identity revealed at the Benning Ball, guaranteeing her unrivaled notoriety. As the danger draws loser, the mysterious spy and Phillippa give in to mutual desire. But when the game turns deadly, betrayal waits round the corner, and Phillippa must decide once and for all, is it the myth that captured her heart, or the man?
Posted by Unknown at 1:51 PM