Review: The Man in the Brown Suit by Agatha Christie 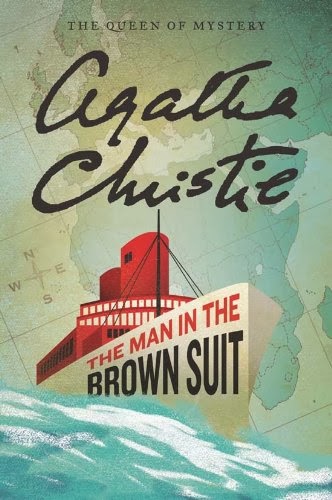 Anne Beddingfeld has always longed for adventure. But as the only daughter of an eccentric professor more content to dwell on the peculiar charms of the Paleolithic period than modern times, she feared her dreams of adventure and romance would always remain just out of reach. When her father unexpectedly passes away, leaving her with a small inheritance, Anne -- equal parts practical and romantic -- seizes the chance to leave her small-town life behind forever and go in search of her own adventure. Traveling to London, she witnesses a man fall to his death on the tracks at a tube station, an incident the police are willing to attribute to a tragic accident -- but the look of terror on the man's face, coupled with the mysterious presence of a man in a brown suit who vanished after examining the victim, leaving behind a scrap of paper with a cryptic appointment written on it, leave Anne convinced of foul play. Determined to discover the truth of the matter, Anne launches an unofficial investigation, linking the man in the brown suit and his apparent tube station victim to the murder of a mystery woman whose body is found in a house for let, the unfortunate rental property the only apparent commonality between the eclectic trio.

When the scrap of paper points to a liner preparing to voyage to South Africa, Anne impulsively books passage, determined to uncover the mystery of the man in the brown suit. There she befriends the charming Mrs. Blair and her handsome, enigmatic companion Colonel Race (who allegedly works for the Foreign Office), an eccentric clergyman, and the humorous Sir Eustace Pedler, owner of the unfortunate rental property, who seems to live in a constant state of befuddled harassment at the hands of his all-too-officious secretary Pagett. The deeper Anne investigates the man in the brown suit, a dangerous web of intrigue is revealed, involving stolen diamonds and a mysterious Colonel, a criminal mastermind whose influence soon threatens Anne's life and that of the man she's fallen in love with -- a man whose own secret past points to his identity as the very brown-suited murder suspect she's chased across continents. Anne is about to discover that real-life adventures are never so neatly wrapped up as the serials she's loved all her life, and if she's not careful this first excursion into sleuthing could be her last.

In browsing iTunes a few weeks ago I stumbled across an audiobook recording of The Man in the Brown Suit, a Christie novel I'd never heard of much less read. Having predominantly read several of her "series" novels -- i.e., those featuring Poirot and Marple, I'm nevertheless always interested in her standalone mysteries as they provide such interesting, oft-times experimental, departures from her norm. On that score, The Man in the Brown Suit delivers in spades. One of Christie's early efforts (only her fourth novel, first published in 1924), this novel showcases Christie's penchant for "bright young things" seeking adventure in exotic locales, besting traditional investigators with a combination of sheer nerve and intelligence. Anne is a winning character, very reminiscent of the serial film heroines to whom Christie seems to be paying homage here -- i.e., The Perils of Pauline and the like -- spunky, well-intentioned romantics.

Christie splits her narrative between Anne's reminiscences and Sir Eustace's journal entries, the latter of which are frankly some of the funniest narrative I've ever encountered in a Christie novel. People, he is HILARIOUS. The dual narrative works well here, particularly considering how fast and furiously Christie throws red herrings and misdirection at the reader along Anne's journey. I do think this novel lacked some of the finesse that would manifest itself in Christie's later work -- the plot was a bit too convoluted for even me as an avid aficionado of her mysteries -- but as an early example of her genius the humor and energy in this storyline is not to be missed. Featuring exotic locales, whip-lash fast plot twists, and a dash of romance (which develops out of thin air, basically, but WHO CARES because Anne is LIVING THE DREAM), The Man in the Brown Suit is an early Christie gem.

Pretty, young Anne came to London looking for adventure. In fact, adventure comes looking for her—and finds her immediately at Hyde Park Corner tube station. Anne is present on the platform when a thin man, reeking of mothballs, loses his balance and is electrocuted on the rails.

The Scotland Yard verdict is accidental death. But Anne is not satisfied. After all, who was the man in the brown suit who examined the body? And why did he race off, leaving a cryptic message behind: "17-122 Kilmorden Castle"?
Posted by Unknown at 10:55 AM

I've never heard of this one before, but it sounds intriguing! It seems like a lot of people have been reading Agatha Christie lately...for some reason, this feels like a good time of year to read her novels. :) I've read four or five of hers and loved them all, so I'm hoping to read more this year. Finding a couple of her books at the thrift store and recently rewatching the Doctor Who episode inspired by her makes me even more anxious to revisit her mysteries. :)

@Kristin - It was fun, give it a try if you run across a copy. And there is something about her "cozy" style of mystery that lends itself well to being read during these cold months.

I go through phases devouring her books...and it has been SO long since I picked one up I see myself hopefully reading several more this year. (Love that DW ep featuring her too!)