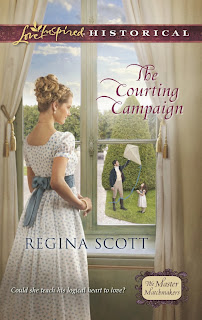 Three months earlier orphaned Emma Pyrmont fled London and her foster father's abuses for a position in the secluded Derbyshire countryside as a nanny. Entering service is a step down in the world, but the sacrifice is worth it, allowing Emma to determine the course of her future, free from her foster family's abuse and manipulation. Like her foster father, the master of the house and father of her young charge, Sir Nicholas, is a natural philosopher -- and while lacking the former's penchant for outright abuse seems content to leave the raising of Alice to servants. When Mrs. Jennings, the cook, makes an audacious proposal, suggesting that Emma set her cap at the master and thus assure Alice of a loving and stable home life, Emma is scandalized. But her well-meaning fellow servant's attempt at matchmaking plants the seed of a plan within Emma -- she'll "court" Sir Nicholas on behalf of her young charge, thereby revealing to him the joys of fatherhood. But steering Nicholas's attention from his critical work developing a safety lamp for his estate's mining venture is easier said than done, and as Emma redoubles her efforts to bridge the gap between father and child, she finds herself in danger of losing her heart to the very type of man she'd sworn to avoid.

I've taken note of Regina Scott's novels before -- mostly thanks to her lovely covers -- but never read one, and in the mood for a quick, light read I decided to try her latest series, The Master Matchmakers. I love the concept behind each volume, wherein well-meaning and dedicated staff attempt to see their employers happily wed. It's a cute conceit that plays well here in relation to the trope of a nanny/governess figure falling in love with her employer. While Mrs. Jennings's initial suggestion to Emma rather awkwardly introduces the concept of matchmaking, once Emma determines to open Nicholas's eyes to his daughter the unofficial, familial ease that develops between the trio is well-developed.

I really liked Scott's emphasis on early nineteenth-century science, especially as regards Emma's own aptitude for the subject, uncommon in an era that placed a strict emphasis on women developing the "drawing room" arts of music, embroidery, and the like. Both Emma and Nicholas are fairly well-drawn -- while Emma's characterization felt a little flat to me -- her objections to scientific experimentation and its practitioners are certainly well founded, but expressed in a rather rote manner -- Nicholas was rather interesting. He seems to have Asperger's, and given the time period and lack of a diagnosis and understanding of the way in which his brain works, Emma's frustration is understandable. Scott does an excellent job revealing how Nicholas thinks and just how important his process is to him, and watching both him and Emma work toward understanding each other's personalities and needs makes for a sweetly-crafted romance.

The Courting Campaign is a nicely-executed historical with warmth, humor, and an admirable depth, the latter a pleasant surprise given the novel's category-length format. I wish the faith factor had felt rather more organic to the storyline -- it would've been nice to see how faith came to be such an important aspect of helping Emma overcome her past, rather than simply taking her word for it. And while Nicholas and Emma do reach a romantic accord, I would've liked a bit more relational development there -- perhaps greater collaboration on his experiments? However, this proved to be a pleasant manner in which to while away a few hours, and I like the concept of well-meaning but meddlesome matchmaking servants enough to guarantee I'll check out subsequent volumes in the series.

The Nobleman and the Nanny

Emma Pyrmont has no designs on handsome Sir Nicholas Rotherford—at least not for herself. As his daughter's nanny, she sees how lonely little Alice has been. With the cook's help, Emma shows the workaholic scientist just what Alice needs. But making Nicholas a better father makes Emma wish her painful past didn't mar her own marriage chances.

Ever since scandal destroyed his career, Nicholas has devoted himself to his new invention. Now his daughter's sweet, quick-witted nanny is proving an unexpected distraction. All evidence suggests that happiness is within reach—if only a man of logic can trust in the deductions of his own heart.
Posted by Unknown at 11:37 AM