Review: A Study in Darkness by Emma Jane Holloway 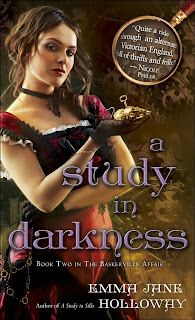 Following her role in uncovering the forgery scandal that implicated the patriarch of the Roth family, under advice from the steam baron Jasper Keating, Evelina Cooper shuns the continuation of her longed-for Season and retires to the country and the (maddening) ministrations of her Grandmother Holmes. As the months pass and rumors dissipate, she returns to London, determined to make an attempt to reclaim something of the life and future her previous investigations imperiled. But when she arrives at the home of her Uncle Sherlock, she barely foils an ill-timed assassination attempt. Recognizing her one-time love Tobias Roth's -- now in the employ of Keating -- fingerprints on the trigger device, Evelina reluctantly acquiesces to her uncle's request to rejoin the Roth household, allowing her to re-establish her friendship with Imogen Roth all while seeking to ascertain the Gold King's plans for Holmes, the Roth family, and the country at large.

But returning to the Roth fold is more difficult than Evelina anticipated, and in a moment of weakness a careless blunder with Tobias places both Evelina's future -- and more worryingly, the fate of her beloved Uncle Sherlock -- in Keating's power. Desperate to redeem her mistake and protect Sherlock from the fallout of her foolish mistake, Evelina agrees to become the Gold King's eyes and ears in his attempt to implement a coup against the Blue King, the steam baron residing over London's poverty-ridden East End. Forced to return to the hardscrabble living she thought she'd left behind forever, Evelina loses herself in the East End in search of the Blue King's maker, the genius responsible for the machines and weapons that could turn the tide of a steam baron war. But a killer stalks the streets, and when an old adversary resurfaces with a tantalizing proposition, Evelina faces a difficult choice -- the life she's always wanted may just be the one she thought she'd left behind forever, and the cost of embracing her magical side may cost her more than she'd ever dreamed.

While I enjoyed Holloway's debut, A Study in Silks, despite its meandering plotlines and padded prose, its sequel is SO MUCH BETTER. I've never read a sophomore release that so improved on an author's debut strengths that it felt almost as if it had been written by another writer entirely. There were moments were I was tempted to wonder if pressing through to finish the first volume of Evelina's adventures was worth it -- and I'm happy to say that thanks to this installment my perseverance has been amply rewarded. Everything about this novel improves on its predecessor -- with tighter plotting, stronger characterizations, and oft-times chilling stakes, A Study in Darkness is a wildly entertaining steampunk adventure ride from start to finish.

Holloway took the risky move at the conclusion of Silks by taking both of Evelina's potential love interests and by their actions in the concluding chapters seemingly writing each off as a possible potential partner. She plays with the fallout brilliantly here -- for not only must Evelina come to terms with the apparent loss of two men, each holding a piece of her heart and representing very different -- yet equally alluring -- futures, but must face her own culpability, her own role in leading each possible romantic interest to the brink of destruction. Safely ensconced in the world of "respectable" society, her future seemingly assured by a social debut sanctioned by no less a personage of note than the Queen herself, in the aftermath of her adventures here is a humbled Evelina -- this is a woman undone. Her journey throughout this installment forces Evelina to confront her darkest dreams and most dangerous impulses, and when faced with the temptation of such power, she's left with a choice: embrace the darkness, or learn the grace to forgive both herself and others, respond to weakness in those she loves with mercy, and craft a future for herself that weaves the best elements of her less-than-savory past with the bright hope of her future.

World-building was one of Holloway's greatest strengths in her debut. Here she takes Evelina's world to dizzying new imaginative heights. I LOVED the glimpse into Nick's world as the fearsome captain of an airship without equal, powered by no less than an air deva of unimaginable power. The elements devas have more personality here, threatening to steal every scene in which they appear. And the glimpse of Evelina's magical capabilities, honed to previously unimaginable heights under Magnus's dark tutelage, provides a fascinating, fantastical counterpoint to the mechanical side of this steampunk version of Victorian England.

While Holloway builds suspense surrounding Evelina's illicit training with Magnus, she dives into the dangerous real-life history of late nineteenth-century Whitechapel by exploring the dangerous mystique of the Jack the Ripper slayings. I LOVED Holloway's steampunk spin on the Ripper killings -- just when I thought she was taking a straight historical approach, incorporating that unsavory, dangerous chapter of the East End's history in order to heighten the sense of danger surrounding Evelina's presence there, she pivots -- and the Ripper becomes a threat the like of which I'd never imagined. I was alternately enthralled as the mechanics of Holloway's plotting played out and genuinely, deliciously creeped out -- the Ripper was a twist I wasn't expecting, and the manner in which Holloway weaves the killer's actions and identity into both novels is just genius. Well played, Holloway, well played.

A Study in Darkness proves that Holloway is a force to be reckoned with in the world of steampunk fiction. She takes genuine, heart-breaking risks with characters I thought I knew, and with the reveal of the Ripper's identity proves that she's more than capable of weaving a heady web of red herrings and false clues that readers will love to lose themselves in. For those coming to the series thanks to the Holmes connection, Holloway's characterization feels pitch-perfect, and Evelina is proving to be a worthy heir to the Holmes name -- though more emotionally volatile than her famously logical uncle. While I enjoyed Holloway's debut I adored her sophomore effort, and with the heartbreaking conclusion of A Study in Darkness, I cannot wait to see how the long-simmering Baskerville Affair -- and Evelina's future -- plays out in the final installment, releasing at the end of December!

When a bomb goes off at 221B Baker Street, Evelina Cooper is thrown into her uncle Sherlock’s world of mystery and murder. But just when she thought it was safe to return to the ballroom, old, new, and even dead enemies are clamoring for a place on her dance card.

Before Evelina’s even unpacked her gowns for a country house party, an indiscretion puts her in the power of the ruthless Gold King, who recruits her as his spy. He knows her disreputable past and exiles her to the rank alleyways of Whitechapel with orders to unmask his foe.

As danger mounts, Evelina struggles between hiding her illegal magic and succumbing to the darker aspects of her power. One path keeps her secure; the other keeps her alive. For rebellion is brewing, a sorcerer wants her soul, and no one can protect her in the hunting grounds of Jack the Ripper.
Posted by Unknown at 6:28 PM

Oh! I want to read this book! I am going to hunt all over for it. It sounds fun, and it mentions Sherlock and I love Sherlock. Maybe I can find it at my library.

Awesome review. You have such a knack for writing these. And now I'm really interested in this book - I'll have to add it to my "must-read" list. ;)