Review: The Roots of Evil by Philip Reeve 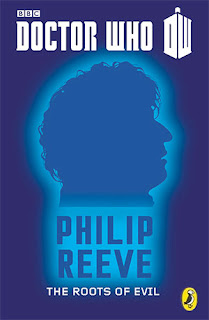 The fourth entry in Puffin's yearlong celebration of Doctor Who's fiftieth anniversary features arguably one of the most iconic Doctors -- the fourth Doctor, the whimsical one with the the wildly rumpled hair and colorful scarf as played by Tom Baker. I knew the Doctor was the Doctor thanks to that iconic scarf long before I ever fell in love with the show myself, and so it was with great curiosity that I approached Reeve's tribute to the fourth incarnation in The Roots of Evil.

Here the Doctor's companion is Leela, played by Louise Jameson during her run on the show. Leela has the distinction of being one of the Doctor's less conventional companions -- a savage warrior, descended from the survivors of an exploratory Earth ship that crashed on an unidentified planet at some unspecified point in the future. Reeve characterizes her as something of an alien primitive, less tech-savvy and "refined" than some of the Doctor's other companions, but extremely bright and self-reliant. The "natural" setting, involving a space station in the form of a sentient tree, is a serviceable showcase for Leela's survival instincts.

I'm unfamiliar with Reeve's other work, so I have nothing with which to compare this slim work, but as a Doctor Who story this was a fun entry in the fiftieth celebrations. I loved the more "natural" setting and the clever manner in which Reeve worked in the unseen -- but very much felt -- presence of Eleven's past actions impacting the future of one of his past incarnations. However, unlike other short stories in this series, I failed to get a clear sense of this particular Doctor's persona and mannerisms. There is the odd reference to the Fourth's scarf, but with my admittedly limited knowledge of his mannerisms, the characterization of the Doctor fell flat.

The Roots of Evil is a worthwhile entry in the short story series if for no other reason than Reeve's clever introduction of a possible paradox between the Doctor's fourth and eleventh incarnations. As a substantive introduction to Baker's Doctor, this story felt lacking -- particularly when compared to its predecessors in the series -- but in sum is still an entertaining, quick read with which to mark my favorite Doctor's fiftieth. :)

When the Fourth Doctor takes Leela to visit an immense tree space station known as the Heligan Structure, little do they know that the tree has been asleep for centuries, dreaming of vengeance against a man in a blue box ... As the tree awakes, the Time Lord and his companion soon discover why they are such unwelcome guests.


Author Philip Reeve puts his own unique spin on the Doctor, his terrifying alien enemies and time-travelling adventures. 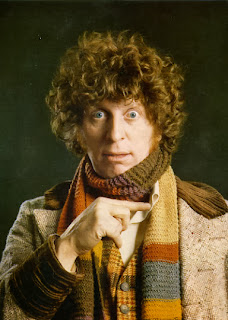