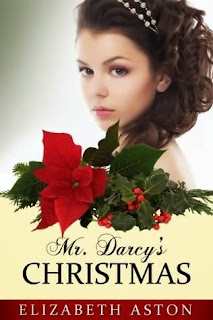 Earlier this month, in seeking to keep with the Christmas season I combed through my Kindle collections for Christmas-themed tales. In doing so I rediscovered this Pride and Prejudice-inspired story by prolific Austenite Elizabeth Aston. Aston's novels and stories expanding on the world and characters first introduced in Austen's classic have been on my radar for years, but till now I've never taken the opportunity to explore her fiction. I love the that instead of opting to retell Elizabeth and Darcy's story from one or both points-of-view, Aston instead fleshes out their post-marriage lives and world.

Mr. Darcy's Christmas occurs several years after Elizabeth and Darcy's wedding. England is again at war with France, and Darcy (unsurprisingly for a man of his influence and temperament!) finds himself increasingly called away from Pemberly to serve his country at the highest levels of government. But nothing will keep him away from home this Christmas, particularly with the pending announcement of his beloved sister Georgina's engagement.

One of the most eligible heiresses of the ton, Georgina met and captivated the handsome, wealthy Mr. Moresby right out from under Caroline Bingley's nose (much to the latter's chagrin). Moresby is highly respectable, a pillar of dependability and moral virtue -- all traits the once vivacious Georgina has found highly desirable since her near-disastrous youthful indiscretion with Wickham. When Colonel Hawkins, one of her brother's oldest friends, arrives for the festivities, she finds herself inexplicably drawn to the handsome and oh-so-considerate old family friend -- and questioning her choice of husband. As Caroline makes a bitter play to drive a wedge between Moresby and Georgina, the young Miss Darcy is faced with a choice -- let fear of the past shackle her to a loveless marriage, or lay her past to rest once and for all, and seize the chance to write a love story to rival her beloved brother's.

Within the pages of this slim novella Aston delivers a thoroughly entertaining glimpse into her expanded Austenesque universe. Laced with period flavor and Christmas charm, what makes this story shine is its simple, plausible insight into Georgina's character. Her desire to forswear any many reminiscent of Wickham, and thereby remind her of her greatest shame -- to avoid and no longer trust her feelings and judgment is a refreshingly solid basis for this charming character sketch. As supporting players Darcy and Elizabeth are now more mature but no less in love -- and the glimpses Aston provides of their marital relationship feels very true to canon. This novella is a delightfully Christmas-flavored treat, replete with Yule logs and all the trimmings of a Regency-era celebration. Mix with the threat of scandal, the promise of romance, and gentlemen in cravats and the result is a frothy confection of a story, a worthy way in which to while away a few winter hours.

A joyful Christmas at Pemberley with Mr. Darcy and Elizabeth - until Caroline Bingley threatens Georgiana Darcy’s future happiness.Set in the wonderful world of Jane Austen, this sparkling and witty romantic comedy takes us to Pemberley for an enchanted Christmas, where Mr. Darcy and his family enjoy the delights of the season, culminating in a ball to celebrate his sister’s engagement. But a serpent lurks amid the greenery and Yule candles, as spiteful Caroline Bingley sets out to ruin her dear friend, Georgiana.Haunted by her near-elopement with Mr. Wickham, Georgiana, Mr. Darcy’s sister, plays safe when she accepts Francis Horsley’s proposal of marriage. As the Darcy family gather at Pemberley to celebrate Christmas, Caroline Bingley, in a fit of envy, spreads dark rumours about her friend. With the help of aloof and amused Sir Giles Hawkins, Georgiana finally finds her true Darcy spirit and fights to regain her reputation – and in doing so, finds true love.
Posted by Unknown at 6:11 PM

Aw, this one sounds really cute! Thanks - again - for the beautiful review, Ruth. You make me want to read this novella.

...hope you and yours enjoyed a beautiful Christmas! :)

I enjoyed this one too. Glad you finally had time to read it. I love how Aston develops characters. Happy Holidays Ruth.

@Rissi - I hope you and yours had a Merry Christmas too, my friend! And thank you! This is a really cute, fun read...definitely worthwhile! :)

@Laurel Ann - Happy Holidays to you as well, my friend! I think I must thank you for making me aware of this novella a few years ago...I expect that's how it ended up on my Kindle. :)

@Birdie - Hope you enjoy it! Off to add A Darcy Christmas to my Amazon wishlist. :)