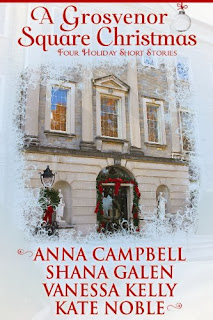 When a friend shared the news on Facebook that A Grosvenor Square Christmas was currently free for Kindle, in the mood for some holiday romance I downloaded it -- and I'm so glad I did. While I'm unfamiliar with the previous work of the four authors involved, three of the four stories included were wildly enjoyable -- and for a free "purchase," that average is a priceless return on one's investment. :)

The stories span a nearly thirty-year period, threaded together by virture of all occuring at Lady Winterson's annual Christmas ball -- where legend has it that under the watchful eye of the famed hostess and her indefatigable butler, Philbert, one lucky couple a year will find lasting love amid the glittering lights and mistletoe.

The festivities begin with "The Seduction of a Duchess" by Shana Galen, a companion pieces to her Sons of Revolution series. This story features Rowena, the widowed dowager mother of that series' heroes, who unexpectedly finds herself granted a second chance at love at Lady Winterson's ball. Gabriel, her one-time footman -- and responsible for saving the lives of her and one of her sons from Madame Guilloutine years earlier -- is now serving England and a titled nobleman thanks to his work as the infamous spy, the French Fox. A heroine -- a grandmother no les! -- ten years older than her would-be lover? I am so there. A fun, fast-paced interlude with a hint of spice! 4/5 stars.

The second tale, "One Kiss for Christmas" by Vanessa Kelly, is utterly delightful. It features Nigel Dash, apparently a popular supporting character from her previous Regencies -- and after reading this story I can see why. Nigel is the antithesis of the alpha male hero -- good-natured to a fault and incredibly kind, everyone's best friend but never considered a serious romantic prospect. Long in love with Amelia, darling of the ton, Nigel finally decides to recast himself as a serious rival for Amelia's heart just in time for the Christmas ball -- with humorous, heartfelt results. Nigel is a fantastic "good guy" hero, and his story -- one of the longer offerings in this collection -- is a thoroughly satisfying gem. 5/5 stars.

I don't even know where to start with "His Christmas Cinderella" by Anna Campbell. I have to give her credit for reworking a classic fairy tale (always one of my favorite things), but any charm her retelling might have possessed is lost in the utter crassness of the story's beginning, introducing Campion and Lord Lachlan's love story (and I use that term loosely). Theirs is an attachment predicated solely on lust (at least, that is the only indication one gets given that the bulk of this story's page time involves their amorous escapades). No subtlety or charm here -- Campion comes across as a pathetically misguided woman, her handsome "prince" a bit too much of the rake for my tastes. The most laughable aspect has to be casting Lachlan's mother as Campion's fairy godmother, especially given the rather explicitly described nature and frequency of their "relationship." 2/5 stars.

The collection ends on a strong note with Kate Noble's "The Last First Kiss," which is ADORABLE. Tomboy Susannah is left bereft when Sebastian, her best friend (and the boy she loves), leaves for his Grand Tour. WIth her aunt's help she determines to transform herself into a woman he won't be able to resist upon his return -- which, after two years, coincides with the magical promise of Lady Winterson's ball. Seeing Sebastian awaken to the fact that his little friend has grown up without him into an alluring woman he doesn't know what to do with makes for a deliciously fun read. And after nearly three decades, Lady Winterson is poised to finally experience the magic of the ball herself. For both her and Susannah, one kiss promises to change everything...5/5 stars.

I thoroughly enjoyed three-fourths of this collection, which does indeed deliver on its promise of magical holiday romance. Kelly's and Noble's stories are particularly strong efforts -- great examples of wholly satisfying reads in a format where it is all too easy to be left wanting. Very well-done!

Down through the years, enchantment touches a tall gray house in Grosvenor Square. The legend of Lady Winterson’s Christmas ball promises true love and happiness to one lucky couple. Who will feel the magic this winter?

1803 - The Seduction of a Duchess by Shana Galen

Rowena Harcourt, the Duchess of Valère, never forgot the handsome footman who helped her escape the French Revolution. For fourteen years, Gabriel Lamarque has loved Rowena—now at Lady Winterson’s Christmas ball, has fate finally delivered a chance to win her hand?

1818 - One Kiss for Christmas by Vanessa Kelly

Nigel Dash is London’s most reliable gentleman, a reputation he never minded until he fell in love with beautiful Amelia Easton. Unfortunately, Amelia sees Nigel as a dependable friend, not a dashing suitor. At Lady Winterson’s famous Christmas ball, Nigel vows to change Amelia’s mind—by sweeping her off her feet.

1825 - His Christmas Cinderella by Anna Campbell

At the season’s most glittering ball, a girl who has never dared to dream of forever after discovers a Christmas miracle.

Susannah Westforth has always loved Sebastian Beckett – but he’s only ever seen her as a friend. When Sebastian takes his Grand Tour, Susannah transforms herself into a woman he’ll notice. Now Sebastian is back, just in time for Lady Winterson's Christmas ball – but the last thing he expects to see is his little Susie, all grown up...

You’re invited to join the whirling dance at Lady Winterson’s sparkling Christmas ball, where miracles happen and true love shines forever. How can you resist?
Posted by Unknown at 5:06 PM

Hehe, I caught it in time! It is past Christmas now, of course, but every once in awhile through the rest of the year one needs a good Christmas romance. Especially when it is cold outside in the middle of February and there is a fire going.