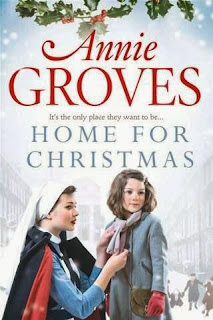 Annie Groves's saga following four women on the London homefront during the early days of World War II continues in Home for Christmas. Picking up just a few short weeks after the conclusion of London Belles, which saw Olive, her daughter Tilly, and their lodgers Sally, Agnes, and Dulcie survive the first wave of Hitler's blitz on London, these five very different women find themselves newly bonded in a sisterhood forged by the hardships of war. Sally continues to bury herself in her work as a nurse at St. Bart's -- immersed in the horrific impact of the Blitz first-hand, she remains haunted by her mother's death and father's hasty remarriage. Agnes is thrilled to be "as good as" engaged to her boyfriend Ted -- the only blight on her joy the shadow of her past as an orphan and the obvious disdain in which Ted's mother views her son's relationship. The vivacious Dulcie finds security in her new-found friendship with her fellow Article Row residents, but struggles with her mother's rejection and chafes against wartime restrictions. Tilly, determined to forget Dulcie's handsome brother, blossoms in her work for the ambulance service, and catches the eye of a handsome American reporter newly-arrived to bring stories of the Blitz home to audiences across the sea. And Olive worries for all of "her girls," but particularly Tilly, as she fears the desire to seize a scrap of happiness in these uncertain times will lead one or more of the girls to irrevocable heartache, little realizing that it is perhaps her own heart in need of guarding most of all.

Whereas London Belles, the first installment in Groves's Article Row series, was tasked with introducing five heroines from wildly varied walks of life, in its sequel roles and personalities are established, allowing Groves to shift her focus to the impact of the war on the homefront society as a whole as seen through the experiences of her heroines. While I enjoyed the nostalgic, sentimental feel of London Belles, that novel as an introduction to Groves's writing is not without its problems -- among them the aforementioned sentimentality and the arguably often glacially-paced plotting -- I genuinely felt invested in the characters' lives and experiences. I love the fact that Groves opts to explore in great depth the lives of women on the homefront, and how the war not only gave them increasingly wide opportunities in the professional realm but she invests great time and detail and explicating the war's emotional and practical effects.

Happily Groves's second outing to Article Row goes a long way toward ameliorating -- if not eliminating -- many of the issues that plagued the first book in the series. With London deep in the throes of the Blitz, Groves's character development is given the chance to shine, as -- having established the players -- she is now free to delve more deeply into the impact the war and its attendant fears and privations have on their lives. One of my favorite storylines is Tilly's sweetly developing romance with Drew, the American reporter. He is SUCH a gentleman and I loved how he gently persisted, determined to win her friendship first, and then her heart. Groves continues to develop Agnes's romance with Ted, and my heart just broke when she first met Ted's battleaxe of a mother, and celebrated when she finally received her longed-for ring. And though it may be the stuff of pure soap opera, I'm anxious to see how the ever-proper Olive's feelings for her very married policeman neighbor develop, as even in wartime such a whisper of scandal could ruin a single -- albeit a widowed -- woman's reputation.

Groves touches on the issue of changing moral views in almost every woman's life, but the focus on such comes in to sharp relief as concerns Sally and her struggles to reconcile her past with the possibility of a future with her doctor boyfriend George. As the war and the Blitz progresses, and casualties on the homefront and abroad mount, society -- particularly young women -- were faced with a choice: cling to a pre-war moral mentality, or bend and embrace a more carpe diem approach to the increasing uncertainties of life. Sally in particular is susceptible to this effect of war, as she is plagued by lost romantic opportunities in her past and faced with death on a daily basis in her role as a nurse (brought into stark relief in the aftermath of a harrowing train derailment). But bending moral views as regards intimacy between men and women is not without consequence, and here Groves hints at drastic changes -- and consequences -- to come, as women both young and old, as embodied by the likes of Sally and Olive, struggle to reconcile societal expectations with the pressing desires of the heart.

Home for Christmas is a wonderful, nostalgic glimpse into a world at war, improving in nearly every respect on its predecessor. While not without its faults (the flashback to Sally's earlier heartbreak feels shoe-horned in and overly long), its occasional "clunkiness" is forgivable in light of its improved  pacing, plotting, and character development. Groves is at her best when exploring the emotional, human toll of the war, and while her characters are simply drawn they are heartfelt and genuine. I like these women, I want them to triumph, but above that my vintage-loving heart appreciates Groves's writing as more than just a love letter to the time, but a tribute to the ordinary men and women who, in the face of the unimaginable horror of the Blitz, found in themselves the ability to become extraordinary survivors.

Home for Christmas is a tale of four very different young women thrown together by war. Finding freedom and independence – as well as love, passion and heartbreak – for the very first time, a unique bond is formed as the hostilities take their toll on Britain.

It's September 1940 and the German blitz on London has just begun. The four young girls who live at No. 13 Article Row live under its constant threat. But life must go on…

Tilly and Sally both work at Barts Hospital where they witness the cruelty of war first-hand.

Agnes volunteers to work extra hours at her underground station to help with the nightly influx of people seeking safety from the bombs.

Dulcie, with her broken ankle, tries to make peace with her mother, following the news of the death of her sister Enid. But her grief-stricken mother doesn't want to know.

Sally returns to her painful past in Liverpool. But it's not seeing the man she once loved, nor her father and ex-best friend's child that hurt most…

As Christmas approaches, the arrival of the handsome young American Drew, ignites new life in the heart Tilly thought was broken.

As the bombs continue to rain down on a frosty London, perilous challenges lay around every corner. And all anyone wants this year is to be home for Christmas.
Posted by Unknown at 11:35 AM