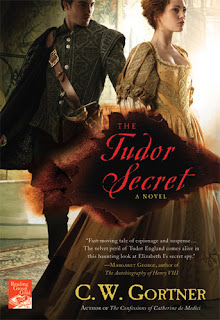 The Tudor Secret (Elizabeth I Spymaster Chronicles #1)
By: C. W. Gortner
Publisher: St. Martin's Griffin
ISBN: 978-0-312-65850-2
About the book:
The era of the Tudors was one of danger, intrigue, conspiracy, and, above all, spies.
Summer 1553: a time of danger and deceit. Brendan Prescott, an orphan, is reared in the household of the powerful Dudley family. Brought to court, Prescott finds himself sent on an illicit mission to the king's brilliant but enigmatic sister, Princess Elizabeth. But Brendan is soon compelled to work as a double agent by Elizabeth's protector, William Cecil, who promises in exchange to help him unravel the secret of his own mysterious past.
A dark plot swirls around Elizabeth's quest to unravel the truth about the ominous disappearance of her seriously ill brother, King Edward VI. With only a bold stable boy and an audacious lady-in-waiting at his side, Brendan plunges into a ruthless gambit of half-truths, lies, and murder. Filled with the intrigue and pageantry of Tudor England, The Tudor Secret is the first book in the Elizabeth I Spymaster Chronicles.
Review:
Brendan Prescott is a foundling, discovered and subsequently raised on the Dudley family estate – a symbol of the family’s charity and an easy target for the Duke of Northumberland’s sons to mock and deride for his lack of antecedents. At the age of twenty he’s sent to court to serve as squire to the eldest son, the handsome and ambitious Robert. Once in London Brendan finds himself thrust in the middle of a life-and-death game of intrigue and deception, with a prize of unimaginable value as the goal – the very throne of England, precariously held by the ill and suspiciously absent Edward VI. Torn between the expectations of the powerful family that had provided the only home he’d ever known, and his desire to serve and protect the flame-haired princess Elizabeth whose strength and character he cannot resist, the naïve Squire Prescott is consumed by a brewing power struggle that promises to pit siblings against each other in a pitched battle for the future of England. While fighting for the survival of Elizabeth with overwhelming forces arrayed against her, Prescott discovers an aptitude for spy-craft and begins to uncover the tantalizing truth of his past and the dangerous secret that ties him to the Tudors – a secret that his enemies will stop at nothing to keep silenced forever.
The Tudor Secret is my first C.W. Gortner novel and it will most assuredly not be my last. I love it when an author takes established historical fact and then begins to ask “what if?” – and that simple question opens the floodgates to fascinating possibilities and brings a world long since passed to vibrant, brilliant life. The established historical basis for events within The Tudor Secret concern the succession drama surrounding Edward VI’s illness and death and the Duke of Northumberland’s move to establish his daughter-in-law, Lady Jane Grey, as Queen. Had he succeeded, through Jane’s husband and his son Guilford, the Dudley family would have been legitimized as rulers of England – instead of the not-so-secret power behind the throne Northumberland exercised during Edward’s short reign. Though historical record does not place Elizabeth at court during Edward’s last days, Gortner dares to imagine what might have happened had she done so. And from there, how a chance meeting with an intelligent and resourceful squire like Brendan, in service to Robert Dudley, the one man who could be Elizabeth’s undoing, could alter the course of history. Peopled with fascinating real-life characters seen through Brendan’s eyes, from the future Elizabeth I to Francis Walsingham, master spy destined to play a critical role in Elizabeth’s future reign, Gortner has crafted a heart-pounding tale of suspense that brings 16th-century England to electrifying life.
I love spy stories and unlikely heroes, and this novel delivers both in spades. The Tudor Secret is a page-turning thrill ride through the English court of 1553, rife with all the danger, suspense, intrigue, and secrets one could imagine existing in a world where fortunes were made or lost on a whim and alliances were constantly shifting like sands washed by the tide. Brendan Prescott is a thoroughly engaging hero – he may be new at court, but he proves adept at the balancing act required to survive, and his “learning curve” is a fantastic window through which I was completely absorbed into the Tudor-era world of passion and intrigue. For the last 200 pages of this book I could not put it down. I loved the fictional allies Gortner creates for Prescott, from the plucky stableboy Peregrine, determined to become Brendan’s manservant, to the vivacious and clever Kate Stafford, lady-in-waiting to Elizabeth, and the keeper of her own secrets that Brendan determines to uncover. With an adept eye for historical detail and a gift for bringing history to life, C.W. Gortner’s The Tudor Secret is a fast-paced, engaging, suspenseful novel that will leave you hungering for more – Brendan Prescott’s further adventures cannot come soon enough to suit me.
***
I just wanted to add, that if you're like me and you *could* love The Tudors television series, but that delivers way too much explicit sex and violence, this novel is a great alternative for feeding one's passion for Tudor drama without the graphic content. This novel is action-packed and Gortner doesn't shy away from the realities of the era, but violence is not overly graphic and sex is limited. It's a compelling and more tasteful alternative, which I can happily recommend in that respect as well as being a rollicking good story.
Posted by Unknown at 12:50 PM

Hurry up, will ya, you big tease! I have the sample chapters of this on my Kindle, but I'm waiting until I finish reading Switched before I even touch the sample of this one, because I'm hoping it'll suck me in!

@Kaye - I hurried as fast as I could! :) The last two-thirds of this book I could not put it down - it completely and totally sucked me into the story. I can't wait for book #2 now!

It's not a time period I'm normally that interested in, but for good writing I will venture anywhen. :) I'll give it a try.

I walked into my library this morning, and this was sitting on the new shelf. I just had to pick it up. It sounds like a book I'm going to love. Oh, and I so agree with you about The Tudors. I really wanted to like the show, but there's way too much graphic sex for my tastes.

@Michelle - Finding that book on the "new" shelf at your library sounds providential. ;) I really hope you enjoy it, and I'd love it if you'd check back in and let me know your thoughts!

Ruth, I finished it a couple of days ago. I absolutely could not put it down. I loved how both Elizabeth and Mary were written. I liked Brendan a lot too. I was definitely shocked quite a few times. I liked it enough that I've checked out Gortner's book about Catherine de Medici too. Hopefully, the second book will be out soon.

@Michelle - I am SO glad you stopped back to leave your thoughts on the book. I'm so happy you loved it too! It's quite the page-turner! When I sent Gortner the link to my review, he told me that he's still writing book 2 and it should be out about this time next year. I am NOT a fan of that wait...but I'm definitely hoping to read his other 2 releases soon to help tide me over! :)