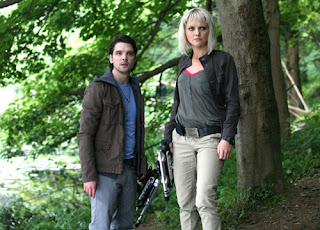 Jess is annoying me more and more! Seriously, in this week's episode, she was her most annoyingest of all time.

@heidenkind - I guess Matt being a stick in the mud and Philip being one of the worst conceived characters in the entire series annoys me EVEN more than Jess. She has become somewhat tolerable...or else I've just turned numb. LOL!

I watched the last episode last night on YouTube. I'd forgotten about some old plotlines and I didn't really expect some of what happened. I'm not really sure how I feel about everything...I'm really curious to see what happens in the fall!

@Lori - Are you referring to old plotlines from previous seasons?

yes, though I will say no more yet unless you know who shows up in this episode.

@Lori - Oh gosh I am a MORON...read your comment wrong. You were talking about episode 6, right? Review to come this weekend! :)

hmm...which ever episode is the finale...I can't remember the number. I watched a couple of episodes in a row.

@Lori - Oh okay, you probably mean ep #7. I didn't get to watch it yet since Saturday I had a marathon of Downton Abbey with some friends...that was fun. :) Since all of the Primeval eps are On Demand now, I should be able to catch up on reviewing eps #6 and #7 this week.