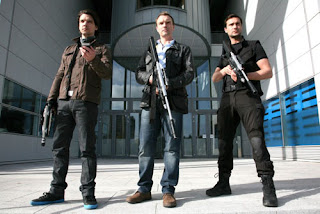 Well, unfortunately I'm two weeks behind on my Primeval blogging (blame Downton Abbey, haha!), but I hope to remedy that situation this weekend. This episode, while entertaining, felt like a bit of a let down after last week's wildy entertaining anomaly in a theatre storyline, and the introduction of Emily (Ruth Bradley) and the evil Ethan (Jonathan Byrne). The Ethan/Emily storyline was almost completely sidelined for this episode. The scriptwriters appear to be teasing with the idea of an Emily and Matt (Ciarán McMenamin) romance - not sure how that is going to work out but it is at least serving to make Matt a marginally more interesting character IMO. Abby (Hannah Spearitt) and Connor (Andrew Lee Potts) are also headed for a bit of a rough patch in their relationship, thanks to Connor's geeked out hero worship of Philip (Alexander Siddig). Turns out Philip's near-death experience in the previous episode left him more than a little freaked out by the ARC's on-site menagerie. He wants to put all the creatures down, including Rex, and of course there is no way Abby is going to stand for that. As much as I LOVE Abby and Connor, I'm glad the writers decided to throw a little bit of tension into their relationship - and when Philip, Connor's professional idol, attacks Abby's beloved animals and Connor doesn't immediately support her - well, it's an entirely believable couple issue within the context of the show.
This week's anomaly opens up in a school. If you set aside the fact that this school holds Saturday detention for three students (seriously, three? that's it?!), the chase throughout the school corridors turns out to be pretty entertaining. This mission finally sees Jess (Ruth Kearney) involved in a mission in a meaningful way, even though she's back at the ARC base directing operations remotely via the school's security cameras. I'm still not overly fond of her character, but the scriptwriters handed Jess a major reality check with this episode that was long overdue and finally showed us the type of computer skills she brings to the table. Abby initially tries to get Jess to help her smuggle the creatures out of the ARC, but when Jess witnesses one of the therocephalians kill a student, she's dealt a major reality check about the dangers involved in the ARC's work. 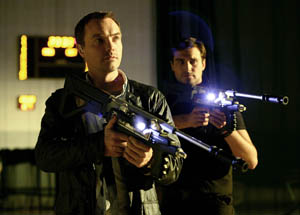 The therocephalians were fierce and creepy, and oddly seemed to multiply like crazy - which, given their venomous bite and flesh-eating preferences made them extraordinarily creepy. I really enjoyed seeing Connor in the field for a change instead of Abby - he's always been more of a tech guy, but he gets to show how adept he is in the field in this episode, with the added bonus that he gets to save the day and impress the two dorks who actually survive the detention/creature debacle. Which brings me to this whole mission. Inspite of the detention contrivance, it was actually kind of refreshing to see the show recognize that the ARC doesn't operate in a vacuum - and it's highly realistic that innocent bystanders would fall victim to creature incursions occasionally (way more often than they do on this show anyway, haha!). 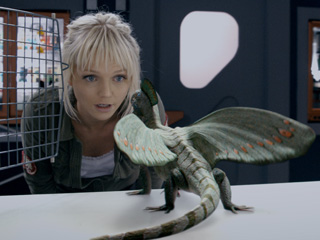 The dangers of the ARC's job hit closer to home than usual when Becker (Ben Mansfield) is overwhelmed by the therocephalians. I really do love Becker in all of his stoic, upstanding goodness, but his...how can I say this...his strictness this season has been a bit over-the-top. I get that he was emotioanlly scarred by losing Danny, Connor, and Abby at the end of Series 3, but if anyone should be scarred it should be Connor and Abby - and they've re-acclimated to life in modern times remarkably well. Becker by comparison seems to view anything less than by-the-book, break no rules success a personal failure. Hopefully, it will do his character a bit of good to have had a close brush with death. And since it seems like a Becker/Jess romantic pairing is inevitable, I was glad to see Jess remind him that lives saved were just as important to remember as lives lost. The man needs to dwell on the positive a bit more. LOL!
It's no secret that I absolutely adore Lester (Ben Miller), and he was hilarious in this episode. He has not responded well to Philip's new role as ARC boss - and the beauty of Lester is that he's utterly incapable of turning off the sarcasm and snarky comments. I loved it when he threatens what might happen to Philip's reputation if the ARC's secret operations became public knowledge, and it's leaked that he's a dinosaur killer. As Lester reminds Abby, the mammoth did save his life once - but that doesn't mean that he's actually a nice person. :) Oh Lester, I adore you in all of your snarky glory and highly repressed niceness.
Looking foward, I really hope that the Emily/Ethan mystery lives up to the hype. I don't think I'd really like it if Ethan turns out to be a male version of Helen, but who knows?! Maybe it could work. And the show really needs to make sense of Philip's involvement with the ARC and the "new dawn" operation, and Matt and Gideon's (Anton Lesser) relationship and their secret plans for the anomalies. Given Matt's nearly empty apartment, I'm starting to wonder if perhaps he came through an anomaly at one point - hence his reluctance to talk about his past. That would be an interesting plot twist, hmm? :)
Posted by Unknown at 4:55 PM

But if Becker stops following rules, WHO KNOWS WHAT MIGHT HAPPEN. He might have to admit his attraction for a certain ARC employee. ;)

Matt's apartment was ridiculous. He's clearly insanely rich if he can afford that place.

@heidenkind - HA! Yeah either that or he'll lose it completely go postal in the workplace. It could go to any extreme. LOL!

And yes, Matt is clearly insanely rich...but NO knick knacks? NOTHING?! So weird. But that is definitely in keeping with his character. Weird I mean. :)

Good point about Matt possibly coming through an anomaly. I started wondering that too, esp. after ep. 5. I think they really need to start giving a few more clues to at least one of this season's mysteries...I'd prefer if they address the Matt situation and/or Ethan situation first.

Thank goodness Lester is back in rare form. They really didn't give him enough lines the first few episodes. This ep. was great and I think he may be even better in ep. 5.

And don't even get me started on the apartment situation! Every one they have shown has been ridiculous and London is sooooo expensive!

@Lori - Okay, Comcast really needs to put episode 5 On Demand so I can re-watch it! And what was up with BBC-A skipping a week?! *sigh* Did you realize that this season is only 7 episodes?! They have TWO episodes to start addressing some of these crazy mysteries they've brought up...hopefully they don't leave too many plot threads hanging!

I agree, between episode 4 and 5 Lester is on a roll! Ultimately Philip's character has been a disappointment to me this season - very underused, they may as well get rid of him IMO.

Matt has to have come through an anomaly...the ridiculous apartment with NO personal items?! Craziness. And what the heck is the pay scale at the ARC? Jess's apartment rivals Matt's and she has to be making much less than him, at least one would think...

Oh dear! This is going to be just like Downton Abbey. I didn't realize there were only 7 eps...there's no way they can resolve everything. And then who knows how long we'll have to wait until the next season.

@Lori - Well not quite. My understanding is that S5 has already been filmed and will air in the fall. But it's only 6 episodes...