Review: Jane and the Man of the Cloth by Stephanie Barron 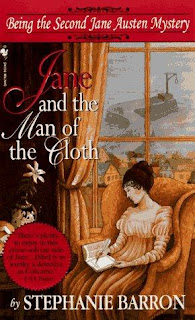 Jane and her family are looking forward to a peaceful holiday in the seaside village of Lyme Regis. Yet on the outskirts of town an overturned carriage forces the shaken travelers to take refuge at a nearby manor house. And it is there that Jane meets the darkly forbidding yet strangely attractive Mr. Geoffrey Sidmouth. What murky secrets does the brooding Mr. Sidmouth seek to hide? Jane suspects the worst - but her attention is swiftly diverted when a man is discovered hanging from a makeshift gibbet by the sea. The worthies of Lyme are certain his death is the work of "the Reverend," the ringleader of the midnight smuggling trade whose identity is the town's paramount mystery. Now, it falls to Jane to entrap and expose the notorious Reverend...even if the evidence points to the last person on earth she wants to suspect...a man who already may have won her heart.

Some two years have passed since Jane Austen had cause to exercise her fledgling detective skills on behalf of a friend - namely, Isobel, Countess of Scargrave, who, being charged with murder, found herself exonerated thanks to her friend's tireless efforts to uncover the truth of the sad circumstances surrounding her husband's death. Now Jane is bound for the coastal town of Lyme, in the company of her parents and beloved sister Cassandra, when en route their coach is overturned in a violent storm and Cassandra is left injured. The ever-resourceful Jane seeks help and refuge from the closest home available - High Down Grange, where she meets its owner, the brooding Geoffrey Sidmouth and his beautiful French cousin, Seraphine LaFevre. The manner of their introduction leaves Jane convinced that all is not as it seems at the Grange. After the Austens are safely installed at their rented cottage, the mystery of Geoffrey Sidmouth takes a sinister turn when the object of the man's scorn is found hung at the water's edge. Her curiosity roused, Jane begins to make discreet inquiries and discovers it is openly assumed that Sidmouth is "the Reverend" or "the Man of the Cloth," one of the Gentlemen of the Night - smugglers - who haunt the English coast specializing in the illicit "import" of fine silks and other highly-taxed goods. When one Captain Fielding, a retired Naval officer who claims to be investigating the Reverend, is discovered murdered and all evidence points to Sidmouth's guilt, Jane must use all of her intelligence and investigative abilities to discover the truth of Sidmouth's activities on the coast - for she is as loathe to believe his guilt as she is to admit that the master of the Grange may have captured her heart.

Stephanie Barron's second offering featuring the beloved Jane Austen as amateur sleuth is every bit as delightful as the first, proving Barron to be a master at channeling Austen's style and incisive wit and fleshing out what little is known of her life with historical fact and rich period detail. It is established fact that Jane visited Lyme during 1804, and indeed what she encounted there must have made a powerful impression since the town is featured in her final novel, Persuasion. Little correspondence survives from this period in Austen's life, and family rumor alone alludes to a "nameless and dateless" romance Jane experienced with a clergyman during a seaside holiday that provide tantalizing, but unformed, glimpses into this period of Jane's life. Barron uses these bare facts as the basis for Man of the Cloth, fleshing out this period in Austen's life, resulting in a rousing tale of mystery, adventure, espionage, and ill-fated romance. Jane's adventures are wildly varied - she gains as much intelligence from assembly room dances and sitting room calls as she does from highly unorthodox investigations of smugglers' caves and hidden tunnels. One could argue that so much outdoors adventure is outside the realm of possibility in the life of an author known for incisive social commentary, but I for one find the high adventure aspect of this fictional sojourn in Jane's life a fitting tribute of sorts to the adventurous, sensational gothic novels popular in Austen's day, that she would later satirize in her own Northanger Abbey.

One of the many things I love about this novel is the way in which Barron grounds Jane's supposed adventures in historical fact. With much of the author's life a veritable blank slate, thanks in large part to Cassandra's measures to protect Jane's privacy by destroying much of their correspondence after her death, Barron has free rein with which she can explore various aspects of 19th-century society and conjecture as to how these adventures may have informed Austen's writing. I was enthralled by Jane's encounter with "free trade" and the Gentlemen of the Night who practiced their dangerous and illicit activities along the English coast. There is something irresistably romantic in association with dangerous and enigmatic rogues who flout law and convention, as Jane discovers with Geoffrey Sidmouth. I was reminded of the 1954 film Moonfleet, and though the film is set some fifty years prior to this novel's action, Stewart Granger's portrayal of a dashing smuggler gave a powerful visual to my image of Sidmouth. Coupled with a dash of espionage that Jane would've been hard-pressed to escape in a coastal community, thanks to England's conflict with Bonaparte and France and her brothers' naval service, Man of the Cloth is a wildly entertaining mystery told with the style, wit, and insight that only a woman of Jane Austen's superior intellect and sense could provide. Bravo, Jane & Stephanie, here's to many more adventures!

This review marks the second or third time I've revisited Jane's singular adventure in Lyme, and it was a complete delight! Jane and the Man of the Cloth is my second entry in the Being a Jane Austen Mystery Challenge and my third in the Historical Fiction Reading Challenge.

Sleuthing Jane? I need to try this.

@Juju - This series is SO good and so much FUN! Hope you decide to try the books!

Maybe I will give this a try. I've been skeptical of the Jane Austen knock-offs, but these sound good if you can suspend the disbelief of Jane as a detective.

@Julia - Oh, I do hope you decide to give this series a try! I was skeptical myself when I decided to try the 1st book (The Unpleastantness at Scargrave Manor), but Barron absolutely captivated me. The keen wit and social insight in Austen's novels serve her well as an amateur "sleuth."

Wonderful review Ruth. You said everything I had hoped to. Stephanie Barron just amazes me. I totally forget that it is fiction when I am reading this series. I am just reading Jane Austen's journal. I could start reading this one again tonight, if I did not have other commitments. On to book three.

@Laurel Ann - Thanks so much! That means a lot coming from the webmistress of Austenprose. :) As you say, on to book three and more adventures with Jane! Thanks again for hosting this fabulous challenge.