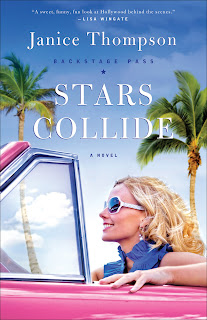 Kat Jennings and Scott Murphy don't just play two people who are secretly in love on a television sitcom - they are actually head over heels for each other in real life. When the lines between reality and TV land blur, they hope they can keep their relationship under wraps. But when Kat's grandmother, an eccentric star from Hollywood's golden age, mistakes their on-screen wedding proposal for the real deal, things begin to spiral out of control. Will their secret be front-page news in the tabloids? And can their budding romance survive the onslaught of paparazzi, wedding preparations, and misinformed family members?

From the soundstage to a Beverly Hills mansion to the gleaming Pacific Ocean, Stars Collide takes you on a roller-coaster tour of Hollywood, packing both comedic punch and tender emotion.

Kat Jennings and Scott Murphy play rival talent scouts on the top-rated sitcom Stars Collide. Life imitates art on and off the set as Kat and Scott finally confess their feelings for each other both on and off-screen. But keeping a budding real-life romance under wraps is nearly impossible when the press and paparazzi stalk your every move, hoping for their next big story. When Kat's grandmother, the eccentric and colorful classic Hollywood star Lenora Worth, mistakes the on-screen fictional proposal for the real deal, Kat's life is thrown wildly off script. Can her personal life survive the intrusive glare of the press and comical, well-intentioned family meddling, or will worries over her grandmother's deteriorating mental health and her best shot at true love be the sacrifice she must pay for fame and professional success?

I've always been fascinated by the behind-the-scenes work it takes to create my favorite films and TV shows. Some of my favorite classic films revel in the backstage drama it takes to create a glittering film fiction, like Singin' In the Rain, Kiss Me Kate, or The Band Wagon. The premise of Stars Collide and the entire Backstage Pass series promises plenty of opportunities for drama among the actors, writers, and crew members who work together to make the fictional sitcom a reality. I loved seeing Kat and Scott's real-life romance jump from the pages of a Stars Collide script to real life. Scott's a great hero, very reminscent of DJ from Thompson's Weddings Bb Bella series - both are grounded believers and gentlemen in every sense of the word. But unlike Bella, Kat comes across as much, much needier. Her constant second-guessing and angst over her budding relationship with Scott or her grandmother's health wore a little thin after a while. It was frustrating to see Kat constantly enable her grandmother's memory issues by fabricating or allowing stress-inducing fictions to exist and multiply rather than facing the issue head-on. I would've liked to have seen less of Kat's personal life and more of the Stars Collide crew interaction. Despite the fact that it seems a little contrived that most of the cast and crew are Christians and the show is so family friendly and top-rated, the on-stage scenes were among the strongest in the novel and really showcase the author's background insider knowledge as a screenwriter.

My favorite aspect of the storyline is Kat's colorful grandmother, one-time Hollywood A-lister Lenora. Since I'm a huge fan of Hollywood's golden age, I loved Lenora's constant references to real Hollywood stars she either worked with or knew of their own off-screen drama. And her predilection for dressing in elaborate gowns as everyone from Bette Davis to Grace Kelly added to her eccentric charm. The movie quotes game she constantly plays with Kat is also a fun touch - yes, most of the quotes are pretty well-known, but the steady stream of classic movie references was a nice touch. Honestly, I would've preferred to read an entire novel devoted to Lenora's story - I thought her personal drama of love lost and found years later was extremely compelling and sweet, a drama worthy of a big screen treatment.

While Stars Collide is very reminscent in tone and style to Thompson's previous Weddings by Bella series, this story just didn't click with me overall as well as Bella's whacky family drama did. Kat was a more frustrating than quirky and endearing heroine, but her well-meaning grandmother's shenanigans and the charm of her real-life leading man with a heart of gold kept me turning pages. I hope that the next volume of the Backstage Pass series - focusing on scriptwriter Athena - gives readers even more backstage Hollywood drama to enjoy. For readers craving a little Hollywood glitz, Stars Collide delivers a light and frothy romantic comedy - the promising start to Thompson's Backstage Pass series.
Posted by Unknown at 4:03 PM

This book sounds reeeeally good. Thanks for the review! :)

This sounds like something I would enjoy. :) I loved her "Weddings by Bella" series!

@*Brani* - You're welcome! Thanks for dropping by! Hope you get a chance to read this one! :)

@Kristin - Given our mutual love of classic Hollywood I think you'll enjoy this one. :)

i agree with you pretty much 100% on this book. actually i think with the last book about Bella, we felt the same way too.

@Deborah - I think you're right. LOL!

Interesting review. I love your honesty. =}