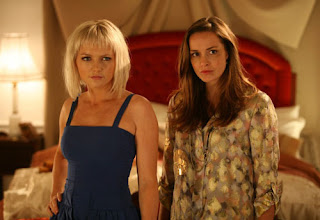 I really needed Cliff's Notes for this episode, and the next one for that matter. When Jenny showed up I was like, "Yay, Claudia!" But then they said it was Jenny and I was all, "Wait... who's that again?" Still, I'm glad her husband loves her enough to ignore the fact that she used to work with dinosaurs. ;)

@heidenkind - You know, you bring up a great point. I shouldn't let my frustrations w/ Jenny color the fact that Michael was VERY understanding in the end. :)

And yes...there was A LOT going on in this episode. Almost too much at times... *sigh*

Ok, when I commented on your last post about not seeing some thing coming, I was referring to events from ep. 7.

As for this ep., I fully agree about the disappointment with the reappearance of Jenny. She came off kind of lame and in total denial about what kinds of weird things go on in the world—like you said, why wouldn't she expect an anomaly to disrupt her wedding?!?

You're also right about how many plot lines are not fully developed. Maybe they shouldn't have tried to do so much. Maybe if there were fewer new characters they could have made it work with such a short season. They set up so many questions that it would take an American-style season to answer them!

Glad I am not alone in thinking Jenny's reappearance came off as something of a disappointment. She was suffering from massive denial!

On the one hand I am glad the writers had ambition story-wise, but it seems like with only 7 episodes this season ambition outweighed reality a bit. Oh well, c'est la vie! Be interesting to see where things go with season 5...

Surely season 5 will be more like a continuation of this season and tie up loose ends. I'm going to be really worried about this show if it starts up again and appears to be headed in another direction.

@Lori - Seriously, that would be pretty bad!

I finally got caught up on these last two episodes on On Demand this weekend.

The one thing that bothered me the most in this episode was Connor's going down into the basement WITHOUT A WEAPON. We're talking about someone who survived a year in the Triassic (or Jurassic or whenever it was) and who's been doing this job for years now. He knows there's been a creature incursion, he hears a strange noise, and instead of calling for backup or finding some kind of weapon, he goes TOWARD the sound. Just another example of the writers' ridiculous overreliance on the "one of the team has to face a creature without a weapon" device in this season. It's just stupid--as if Connor has never learned a bloomin' thing in all the time he's been doing this. Also, couldn't he have CLOSED THE DOOR when he ran into the room where the ceremony was taking place if he knew the creatures were right behind him?

Though I really wanted a solution that would allow Claudia and Cutter to be back together, this did kind of give me the closure I wanted on the Jenny Lewis/Cutter storyline with how she talked about Cutter when she explained everything to Michael.

@Kaye - Re: the weapon thing - weapons have been handled really haphazardly this season. It's like everyone forgot how to use them properly. :P

I'm glad you got some Jenny/Cutter closure. ;) I am still a bit disappointed that they bothered to bring her back only to have her come across as her most annoying...but oh well, c'est la vie!