Review: Beyond This Moment by Tamera Alexander 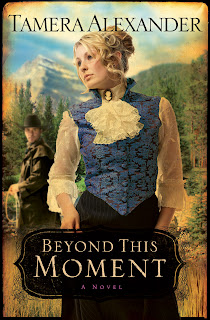 Lives are made up of tiny steps. Some are chosen for us; some we choose. All hold the power to change who we become - but only if we let them.

When Dr. Molly Whitcomb, Professor of Romance Languages, steps off the train in Colorado Territory, she makes a choice - one that goes against everything she stands for. Yet it's the only choice that offers her a chance to regain a fraction of all she's lost.

Sheriff James McPherson's instincts about people rarely miss the mark. He senses Professor Whitcomb is hiding something. He just doesn't know what. When James learns Molly's secret, his own reputation is undermined. and when Molly Whitcomb's reinvented life begins to unravel, it threatens his job, the stability of Timber Ridge, and what he always knew to be true about himself.

Dr. Molly Whitcomb has achieved educational and professional success far beyond what most women could even fathom in 1876. But one mistaken night of passion has cost her dearly, ripping from her hands the professional future she fought so hard to achieve and the comforts of the only world she’s ever known. With her reputation hanging by a thread she seizes the only option offered to her – a teaching position in remote Timber Ridge in the Colorado Territory. Determined to mask her shame behind the veil of widowhood, Molly never imagines the far-reaching ramifications of her desperate rash act, particularly where the handsome sheriff, James McPherson, is concerned. James is a gentleman in every sense of the word, a man of principle and honor the likes of which Molly had never dreamed of meeting in the wild territory. As Molly begins to establish a home in Timber Ridge, her new life, built on a foundation of deception, threatens to destroy everything she’s begun to hold dear. When the truth is revealed, can love withstand the self-righteous recrimination of society and the deep-set wounds found within two hearts desperate for acceptance and a fresh start?

Tamera Alexander has a gift for crafting characters so real, so vibrant, that they spring to life from the page so alive that you cannot help but rejoice with them in their victories and weep with them over their sorrows. Though I haven’t walked Molly’s specific road, her struggle with shame over past choices and the premium she places on maintaining her reputation at all costs are all too real and painfully relatable. It’s all too easy to rationalize our way out of taking responsibility for our actions, of dealing with consequences immediately instead of putting off a painful, but ultimately necessary task. With Molly’s journey, Alexander beautifully illustrates the timeless axiom that the light of truth does indeed set one free, and that God’s gift of second, third, fourth chances and more – His grace – is there for any child who runs to His arms, no matter how far or hard the fall. Similar to Elizabeth, the heroine of the previous novel in this series, I appreciated how Alexander once again crafts a female lead that is strong, independent, and forward-thinking, but wholly of the time period in which she lives. Through Molly’s refined southern eyes, Alexander fully immerses the reader in a community on the brink of great social change, a place struggling to reconcile its roots as a rugged frontier town with the push and pull of social and economic expansion. Alexander’s secondary characters are as fully realized as her leads, and make the world of Timber Ridge a compelling and fascinating place in which to lose oneself.

James McPherson is the type of hero that embodies everything I love about cowboys and the legends of the West. Ruggedly handsome and unfailingly kind, he possesses a code of honor so ingrained in his very being that it informs every decision, every choice he makes. Life was black and white until Molly entered his life, and his attraction to the pretty schoolteacher could not override the nagging sense that all was not as it seemed in her life. When Molly’s secrets collide with his strict code of honor and threaten to unmask his own secret shame, James faces a choice – to exercise grace and faith or run from a love he’d never dared dream of experiencing. James and Molly’s relationship embodies everything I’ve come to love about Alexander’s writing. She can craft a romance that can take your breath away, characters so real and flawed you can’t help but see yourself in their lives, and a redemptive thread that unfolds so beautifully, and with such power, that the grace of it will bring tears to your eyes. Through James and Molly’s story, you’ll witness a powerful illustration of God’s never-failing, awe-inspiring ability to take the messes humans can make of their lives and transform them into something beautiful, if only one surrenders to the fall.
Posted by Unknown at 3:27 PM

Once again, Ruth, you have left me wide-eyed and slack-jawed with your incredible review!! This book was beautiful and your review was equally as beautiful. You made it personal too, which I admire and respect. You show your heart in your words and that is rare and refreshing and I think what makes your reviews some of the best out there! Thanks for sharing your thoughts :) You make me want to read the book all over again!

P.S. - Thanks again for that link to Tamera's new book cover!

@Amanda - Oh, thank you girl! :) I really, really appreciate the feedback. I love it when I encounter a book like Tamera's, that's so personal I HAVE to share its impact. Oh, and you're welcome for the link! :)