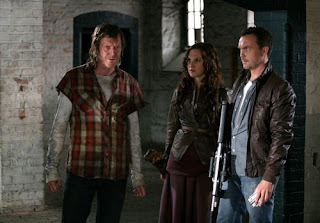 I still don't remember Danny's character AT ALL. Who is he, again?

I've liked this season a lot. Of course it's not as good without Cutter... ;)

@Heidenkind--Danny was the male lead for most of season 3.

The Danny-Ethan/Patrick storyline surprised me; didn't see that coming at all. And I loved that he named his stick "Molly" and the reason for it.

I had a feeling Ethan was going to be a red herring . . . that it was actually going to turn out to be Emily who was the one messing with the anomalies. Wonder if we've seen the last of her. (Wouldn't it be great if they did a Steam Punk spin-off of Primeval set in 1867 where Emily leads a team to protect Victorian England from creature incursions???)

I actually found myself holding my breath at the end of the episode, hoping Connor wouldn't catch up with Philip, but what a great setup for the next series of episodes.

If season five is the final one, hopefully this episode will be the keystone that will strengthen the main story arc of the series---tying the first three seasons in with the final two.

Ruth, great review. I totally agree with your frustrations of this season and expectations of the next one.

I agree with Kaye that if season 5 is it, it would be great if they tie it back to previous seasons. I totally didn't see the Danny-Ethan/Patrick thing coming either but it does make me wonder if they are trying to wrap up some storylines in case this is it.

@ Kaye - I think the steampunk spin-off would be cool too!!

@heidenkind - What Kaye said. :) But oh my goodness, you need to go back and watch season 3. And I do agree with you, season 1 especially was too perfect w/ Cutter. :)

I haven't heard any rumors about Emily returning, but speaking of spin-offs, I am wondering if more of these "caretakers" that Matt references will show up? And yes, a steampunk Victorian era Primeval would be VERY cool.

Putting Connor in peril like that was a great cliffhanger.

And I agree 110% and then some - hopefully season 5 will not see the showrunners try to introduce too many new & crazy storylines, but focus on what's happened so far.

@Lori - Thanks! :) I'm looking forward to seeing how the Danny & Ethan storyline impacts the episodes to come - keeping my fingers crossed the writers deliver! :)