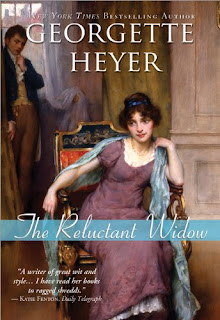 When Elinor Rochdale boards the wrong coach, she ends up not at her prospective employer's home but at the estate of Eustace Cheviot, a dissipated and ruined young man on the verge of death.

His cousin, Mr. Ned Carlyon, persuades Elinor to marry Eustace as a simple business arrrangement. By morning, Elinor is a rich widow, but finds herself embroiled with an international spy ring, housebreakers, uninvited guests, and murder. And Mr. Carlyon won't let her leave...


Elinor Rochdale is a gentlewoman of reduced circumstances, forced to seek a position as governess following her father’s scandalous death. Resigned to a life of drudgery caring for the children of others, she is quite put out of countenance when the chance mistake of entering the wrong carriage sets her life upon an entirely different – and most unorthodox – path. Lord Carlyon has advertised for a bride for his cousin, a dissolute youth, in order to publicly absolve him of possessing any designs on his feckless cousin’s property. For if his cousin’s bride in name only inherits, Carlyon stands to finally rid himself of the baseless rumors that swirl around him regarding his supposed designs on his worthless relative’s assets. Elinor recoils at the thought of involving herself in such a ridiculous scheme, but when one of Carlyon’s brothers arrives with the news that he was provoked into a brawl with the cousin in question and has, as a result, dealt him a death blow, Elinor finds herself quite at the mercy of Carlyon’s extraordinary powers of persuasiveness. By the next morning she finds herself a propertied widow, having inherited her husband’s estate, including debts, a dilapidated home, his questionable acquaintances, and involvement in an espionage plot, all factors that would send a lesser woman into spasms. But despite her abhorrence of her circumstances and new associations, Elinor is too feisty to be so easily cowed, and finds herself Carlyon’s reluctant compatriot in untangling the wretched affairs of her husband of less than twelve hours.
It’s been a couple of years since I’ve read a Heyer Regency (shockingly unforgivable, I know!), but happily time and The Reluctant Widow prove that Heyer has never yet failed to charm, entertain, and delight me. From the start of Elinor’s misadventures with Lord Carlyon to their gloriously romantic finish, The Reluctant Widow is packed with the sharp, intelligent wit and laugh-out-loud humor that I’ve come to expect from Heyer’s novels. Heyer never shies away from placing her characters in the most outlandish, ridiculous scrapes imaginable, to the point that accidental death among cousins is viewed as an almost commonplace occurrence! Elinor is perhaps my favorite type of Heyer heroine. At the age of 26 she’s considered “on the shelf,” but her lack of prospects has in no way dimmed her outspokenness or zest for life. This is a woman who knows her own mind, and while in a weak moment may have been coerced into a marriage of convenience, that does not mean she will allow herself to be easily led in all situations! And Carlyon is everything a Heyer hero should be – handsome, strong-willed, intelligent, and perhaps most importantly of all, not cowed by a lively woman’s wit. The repartee between Carlyon and Elinor is priceless – indeed, the dialogue throughout the novel positively sparkles, begging to be read aloud so each clever turn of phrase or understated sarcastic remark can be fully appreciated.
The Reluctant Widow is so much more than a boy-meets-girl story – the romantic element is subtly woven throughout the plot, but simmering with potency if you’ve the eyes to look for it. The mystery Heyer weaves throughout the story is wildly entertaining – like Elinor, the reader is never quite sure who can be trusted, or what to make of the extraordinary characters and trying circumstances she encounters when thrust into the midst of her husband’s contemptible and traitorous attempt at dabbling in espionage. The supporting cast numbers among the most entertaining I can recall in a Heyer Regency. I absolutely adored Carlyon’s brothers – Nicky, the wild reckless one, and John, whose attempts at propriety mask a nature that can be every bit as outlandish as his brother’s. The Reluctant Widow is vintage Heyer, sharply plotted and replete with her unmistakable wit, unforgettable characters, and a romance between two seemingly disparate individuals that’s so fiery the sparks fly from the page. If you love Austen’s wit and Regency heroes make you swoon, Heyer is an author not to be missed.
***
This review is my first entry in the Georgette Heyer Reading Challenge for the year and my second entry in the Historical Fiction Reading Challenge.
Posted by Unknown at 3:35 PM

It sounds like I should look into this author. :) After I work my way through the library books on my desk.

I finished "The Silent Governess" today, and I absolutely loved it! I had only read a few chapters up until this morning, when I really got into it. So I spent the whole day reading it when I meant to be sewing! :) Anyway, it was so good.

@Kristin - I think you would really like Georgette Heyer. :)

So happy you loved TSG too! I just knew you would. :) I love it when you hit that point in a book where you just CAN'T put it down. That's the best kind of distraction. :)

What a great title! Thanks for the review as I'm not familiar with this one, but it sounds good. We're off to a good start! :)

Great review! You are really ahead of the game on the Georgette Heyer challenge... I haven't even started :)

Great review! I love Georgette Heyer and have read a slew of her books. A few favorites that come to mind are Black Sheep, Arabella, The Corinthian, Frederica . . . okay, I have more than a few favorites! Thanks for stopping by my blog. I bookmarked yours so I'll remember to come back and visit. Can't wait to see what other GH books you read or re-read!

@Joanne - We absolutely are off to a good start on this challenge! :)

@Roving Reader - Thanks! And I'm trying to stay on top of these challenges...my goal, and it'll be interesting to see if I meet it, is to complete at least 1 entry in each of the challenges I've signed up for by the end of January.

@Renee Ann - Thanks for dropping by my blog home too! :) Great to "meet" you - I'm always glad to meet GH fans. :) I've subscribed to your blog feed as well, looking forward to discussing books & such!

I'm so glad I joined this challenge. Why had I never heard of Heyer before?

@Jen - Yay! I'm glad you're glad. :) And as to why you've never heard of Heyer before this, obviously that is a MAJOR friend fail on my part. :P

Thanks for posting your link back on my blog. I hope to compile some others reviews and post them on my blog as an update on the Heyer challenge. I don't know when that will be but can I use your reviews as part as the updates? Let me know back over on my blog. :)

@Taylor - You're welcome! And yes you can use my review - off to leave a comment on your blog! :)