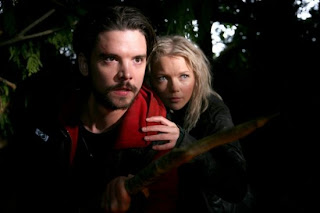 If you've been around this blog for a while, you might remember - or even share - my enthusiasm for a brilliant little British science fiction show called Primeval. The show has quite a tumultuous history - in the middle of series three, which ended on a creative high note in my opinion, it was announced that the show was canceled, and then it was resurrected thanks to an innovative co-production deal just a few months later. Unfortunately, the months it took to negotiate a new production deal made it impossible to bring the show back in 2010. But the wait was worth it, and the show exploded back on my very happy TV screen last Saturday night. If you haven't made time to watch the "prequel" videos, filling in the gaps between the end of series three and the beginning of season four, you can do so here. I highly recommend it - not only do these short videos briefly introduce the new characters, but they serve as a great refresher since the show's been off the air for well over a year.

At the end of series three, the core team was absolutely decimated. Connor (Andrew Lee Potts), Abby (Hannah Spearritt) and team leader Danny (Jason Flemyng) were stranded in the past when the anomaly through which they'd followed their nemesis Helen closed. This threw the entire ARC team in turmoil. Lester's (Ben Miller) leadership is called into question, and Becker (Ben Mansfield) and Sarah (Laila Rouass) are devasted by the loss of their friends. Becker vows to never give up the hope that his lost friends will one day return - especially after Sarah is killed on one of the ARC's search missions for the remaining team members. Sarah was an incredibly under-used character in series three, so I can't say I was surprised that the writers quickly dispatched her during the show's hiatus. Poor Laila Rouass never really got a fair shake in the world of Primeval. *sigh*

So, in the intervening time between series three and four, the entire ARC operation gets a major makeover. Now only 50% government-run, Lester finds himself answering to both the government and Philip Burton (Alexander Siddig), the wealthy scientist responsible for privately-funded 50% portion of the ARC's operations. I don't have a clear read on Philip's character yet, except to say that in keeping with the best tradition of this show I'm sure there's definitely more to him than meets the eye. And since he's sure to lock horns with Lester, I'm sure to enjoy his tenure on the show. :) With Connor and Abby's return in question, new team members have also been brought on board. Jess (Ruth Kearney) has taken on Connor's role as resident techie, and between that, her "airy" personality, and her oh-so-obvious infatuation with Becker, she's already on my last nerve. It will be interesting to see if the showrunners can "save" her character for me (but I'm not holding my breath). The most exciting addition to the cast for me is new team leader Matt, played by Ciarán McMenamin. I've been a fan of McMenamin since I first took notice of him in the Masterpiece Mystery series Jericho. As Matt, McMenamin is quite frankly hotter than I've ever seen him on-screen, and the character also has a delicious air of mystery about him. Matt is clearly qualified to step into the role of team leader, but his motivations are highly suspect when we see him reporting to Gideon, played by Anton Lesser, who apparently has nothing better to do than sit around and stare at plants. Lesser's character is obviously the "new Helen," the only question being is he as crazy as his villainous predecessor, and does he share similar goals? The pull between Matt's undercover activities and his developing loyalty to his ARC teammates is going to be interesting to watch play out - my only concern is that his divided loyalties are setting Matt up to become Stephen 2.0 (see series one asap if you don't get that reference *wink*).

Becker, especially, has taken the loss of Danny, Connor, and Abby hard. There is little better I like in my TV shows than heaping helpings of British angst, and Mansfield delivers on that score better than I ever thought possible, alternating angst with moments of unexpected humor. :) Becker is quite resistant to change, and it was a lot of fun watching him clash with Matt's new leadership style (LOVED the moment when Matt tased him, that was hilarious). Lester also had plenty of great scenes in this episode. Not only do we get to see *hints* of the character's deeply buried compassionate side (HA!), his sarcasm was also out in full force when watching his office trashed by a dinosaur. As much as I love Andrew Lee Potts, Ben Miller's Lester may just be my favorite character on the show. They can never kill him off, I really think I will quit watching if that *shudder* ever occurs.

I love that Connor and Abby are finally in a relationship (as Potts and Spearitt are in real life!) - after all, being stuck in the Cretaceous period for a year would probably create a pretty strong bond, no? *wink* Connor has grown up and matured a lot over the course of the show (I love the slightly scruffy look...and shirtless Andrew Lee Potts at the end of the ep? Didn't expect that but thank you ITV... *wink*), but I was really relieved to see that he hasn't lost all of his trademark, adorable penchant for goof-ups even after making like Indiana Jones in the wild for a year. I nearly cheered when he screwed up and re-opened the anomaly  into present-day London - the ARC may be updated, but some things need to never change. I loved Abby's protectiveness of Connor (their on-screen chemistry is, unsurprisingly, off-the-charts!), but most of all I loved the fact that it's the old team members that "save the day" in the end. Their methods may not be quite as polished but Connor and Abby still get the job done. :)

The special effects in this episode were terrific, well up to the show's best standards. It was a lot of fun watching a giant Spinosaurus rampage through London. The only think lacking in those scenes were more terrified crowds...the streets were way too empty to be "realistic," but if lack of extras was a budget cut that helped bring the show back, I can live with that.

Looking ahead, I'm anxious for Connor and Abby to be re-instated as full members of the ARC team. The new rule about field agents having military experience is quite the insult to the pair's history, never mind the fact that they survived for a year in the Cretaceous period, which in my book is all the field experience someone could need. *rollseyes* However, I do think it was a great story idea to force Connor and Abby to question their place with the ARC - it's going to be quite interesting to see how the old members integrate with the new. I'm also anxious to learn more about Gideon and Philip's role with the ARC (because frankly, Alexander Siddig is gorgeous!) and if Jess will prove less annoying as time goes on (though I'm not holding my breath on that score).

Also, going forward, I don't anticipate that all of my episode reviews of this season will be quite this long. Though one never knows. *wink* In many respects this episode was a set up for (hopefully) awesome things to come, and since the show has been off the air for over a year it was fun for me to spend some liesurely time revisiting old friends. So, if you watched the episode what did you think? And if you didn't and you're intrigued, if you are a Comcast subscriber BBC America has the episode available On Demand. For those of you who stuck with me through this long post, here's a little Becker present for you: 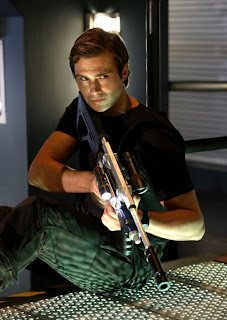 Becker and Matt are totally in love. I kept expecting them to make out during the season premier. Did you see the loooong looks they kept giving each other? ;)

OMG
OMG
OMG
Is there a way for me to watch this online? Please please don't tell me I have to wait for Netflix.

@heidenkind - LOL, you're cracking me up!! They do seem to be developing a bromance, don't they? ;)

@Juju - I KNOW! :) Well, I found two links...you can watch the show on Amazon (http://www.amazon.com/dp/B004HTCID2?tag=ca065-20) or iTunes (http://www.apple.com/itunes/charts/tv-shows/primeval/episode-1-primeval-season-4/). Unfortunately neither of those options are free...but the Amazon season pass at $1.89/ep seems to be a pretty good deal. :)

Oooo I might need to take the Amazon route :) Thanks for the info! :)

Juju, if you have Netflix (or sign up for it), all of the previous seasons' episodes are available to Watch Instantly there. That's what I did the couple of weeks before the new season started.

@Juju - Have you started watching the latest season yet?

@Kaye - Thanks for the extra tip!

@Juju - I've found the eps on YouTube...not the greatest option but I don't have cable service anymore and I can't stand to wait for the DVDs.

Ruth, I totally agree about Jess. And, have you seen her massive apartment in ep 2 yet? What are they paying these people? I hope they develop her more in coming eps. And Abby + Connor = adorable!!

@Lori - Yep, Jess's apartment in ep 2 is ridiculous. Seriously what is the pay scale for these people?!