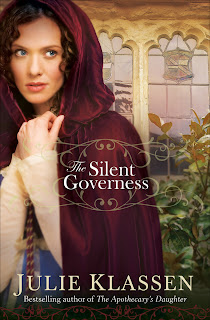 *2010 INSPY Award Nominee for Historical Fiction*
The Silent Governess
By: Julie Klassen
Publisher: Bethany House
ISBN: 978-0-7642-0707-5
About the book:
Olivia Keene is fleeing her own secret. She never intended to overhear his.
But now that she has, what is Lord Bradley to do with her? He cannot let her go, for were the truth to get out, he would lose everything - his reputation, his inheritance, his very home.
He gives Miss Keene little choice but to accept a post at Brightwell Court, were he can make certain she does not spread what she has heard. Keeping an eye on the young woman as she cares for the children, he finds himself drawn to her, even as he struggles against the growing attraction. The clever Miss Keene is definitely hiding something.
Moving, mysterious, and romantic, The Silent Governess takes readers inside the life of a nineteenth-century governess in an English manor house where all is not as it appears.
Review:
Aspiring schoolmistress Olivia Keene’s quiet life is cruelly disrupted when she saves her mother from a vicious attack and in the aftermath is forced to flee, believing herself guilty of a heinous crime. Alone and frightened, with only the vague hope of securing a position thanks to her mother’s recommendation, Olivia stumbles onto Brightwell Court. An unfortunate misunderstanding and a brutal attack leave Olivia at the mercy of the heir of the manor, Lord Bradley. For Olivia has overheard a desperate family secret, and in order to secure his future Edward sees no other option than to keep the beautiful stranger who holds his future in her hands a virtual prisoner in his home. Though her “prison” is a gilded one, Olivia longs for her freedom, even while the desperate circumstances that forced her flight from home weigh heavy on her heart. But the residents of Brightwell Court begin to wend their way into Olivia’s heart – Edward’s young cousins, starved for a mother’s love, provide Olivia with the opportunity to step into the role of governess. And Edward’s pride and fear, which had made Olivia an unwilling resident of Brightwell, prove to mask the kind heart of a gentleman. But secrets cannot remain hidden forever, and Olivia’s reticence to admit her past and Edward’s desperate attempts to hide the secret of his birth threaten to destroy any hope of happiness for the unlikely pair. Seemingly thrown together by chance, Olivia and Edward must each discover that only grace can cover the secrets they are so desperate to keep unspoken, or they may lose their chance at a future brighter than they’d ever dreamed.
I found the exploration of a governess’s lot in life to be absolutely fascinating. Each chapter opens with a quote that eloquently speaks to the theme found within the subsequent pages, many of them newspaper clippings or snippets from 19th century texts describing the duties and perception of governesses by their employers. Olivia’s position as governess at Brightwell Court is a heart-rending example of the cost and sacrifice devoting one’s life to the children of others. Outside the family yet intimately connected with it through the children, and forbidden from socializing with household servants, the lot of women like Olivia was a lonely one, wholly dependent upon the whims of their employers. While Olivia struggles with the enforced solitude, her status in the household gives her the unique position to observe the secrets and relationship dynamics at work in Edward’s home, and her intelligence and empathy make her an asset to the family and an enemy to be eliminated to their foes. In addition to Olivia, Klassen peoples her world with a host of well-drawn characters, from the Edward’s father, Lord Brightwell, who has an unexpected tie to Olivia’s mother that could chang her her future forever, to the crotchety gamekeeper Croome, whose gruff manner hides secrets capable of rocking the carefully ordered world of Brightwell Court to the core. With The Silent Governess, Julie Klassen has created a world for the reader to lose oneself in, filled to the brim with well-drawn, beautifully flawed characters who are so real, so authentic they leap from her descriptive prose fully formed in the mind's eye.
Klassen’s third novel was like a love letter to my Regency-loving heart. The Silent Governess possesses the intricacy of Austen mixed with the passionate romance and secrets of Jane Eyre, a potent combination that results in an unforgettable novel. The story is saturated with an atmosphere of historical authenticity and compelling secrets that will keep you turning pages well into the night. The touch of mystery and the beautifully restrained romance that Klassen develops between Olivia and Edward will steal your breath away. The simmering combination of secrets and passions that lie buried within The Silent Governess result in a compelling, lushly romantic historical that I’d happily name as a worthy heir to the novels that inspired it, such as Jane Eyre. The faith element is deftly woven throughout the novel, never overpowering the story, and feels completely authentic to the time period. I loved Klassen’s exploration of the cost of secrets, and the freedom found in relinquishing one’s fears and plans to the God capable of redeeming all one’s regrets. Though this was my first Klassen novel it most certainly will not be my last. With its heady combination of mystery and romance amid the vibrantly recreated world of 19th-century England, The Silent Governess is a story to savor, romantic escapism at its finest.
Posted by Unknown at 6:30 PM

huh for some reason i swore you had read Klassen's other books. anywho you MUST read her others, you will LOVE them.

@Deborah - I'm drowning in books so half the time I don't know what's what (HA!), but those I know I haven't read yet...they were BURIED in Mt. TBR. But The Lady of Milkweed Manor and The Apothecary's Daughter AND The Girl in the Gatehouse are getting read ASAP (I hope!).

I'm reading this right now. :) Only a few pages in, but loving it already.

@Kristin - Yay! So happy you are enjoying The Silent Governess so far. I do hope you review it on your blog! *hint, hint* :)

Wow, that sounds good. I'm a big fan of historical fiction, so I'll have to check it out.

This sounds great- I'm a sucker for anything Regency! :) Her newest book The Girl in the Gatehouse looks really good as well.

@Jennifer - Oooh, I hope you do, as it is a wonderful read!

@Roving Reader - Haha, me too! :) I think The Girl in the Gatehouse is going to be up next...have a couple of other books I need to get to first, though!

This was one of the best books I read last year...I couldn't get enough of it!

@Christy - I know! I could just imagine it coming to life as a BBC miniseries. If only... :)

I have been looking forward to your review on this and I am so glad I didn't miss it! Wow, this book sounds exceptional. I think it shall have to be one of my first book purchases of 2011 :)

@Svea - Oh thank you so much! I do hope if you decided to purchase a copy of TSG that you will enjoy it as well. I'd love to hear your thoughts. :)