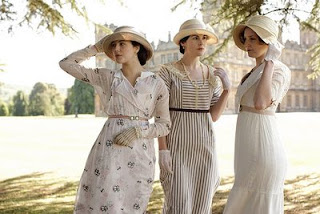 Oh my goodness, I can't believe that Downton Abbey is over this coming Sunday. :( While I'm looking forward to the other Masterpiece Classic productions waiting in the wings, I will miss the world of the Crawleys - at least until Series 2 (hopefully) comes to Masterpiece in January 2012. :) Here's a bit about what we have to look forward to in Part Four, followed by a short preview:


See the conclusion of the hit series Downton Abbey, Sunday, Jan. 31, 2011, on MASTERPIECE CLASSIC. In the final episode, the heir crisis at Downton Abbey takes an unexpected turn. Meanwhile, rumors fly about Mary's virtue. Her sister Sybil takes a risk in her secret political life, while O'Brien and Thomas plot their exit strategy.

Oh, I feel your pain, Ruth! It seems like there are so many storylines to wrap up in just one more episode. I will certainly miss this cast of characters and look forward to their return in the future. :)

@Joanne - I'm glad to have company in my Downton deprivation. :) The wait is going to seem interminable. *sigh* Well, we'll have the DVDs to help us bide our time...plus, I ordered a copy of the Kate Morton book! Eager to read it after your review!

I'm so glad you're going to read The House at Riverton! I couldn't help superimposing images of Downtown Abbey on the story and characters! Can't wait to see what you think about the book. (I love Kate Morton.)

I haven't caught any of this yet, but looks like Netflix will provide streaming of it beginning Feb 9th. I've got it in my queue. The time period is not one I'm overly interested in, but the cast looks great.

I can't believe it's almost over, but I'm so glad we're getting a second series. I think this is my favorite Masterpiece Classic since Bleak House. I'm looking forward to getting Downton on DVD, can't wait to see the unedited versions of each episode. I'm hoping for more Bates/Anna moments, of course. ;)

@Lori - I don't think I rec'd an email notification of your comment - weird! Anyway, I look forward to hearing your thoughts about Downton. I suspect that you will become quite hooked - whether or not someone is interested in the time period, it has proven to be human DRAMA at its finest! ;)

@Juju - The costumes are just FABULOUS!

@Ruth - I agree...this is definitely my favorite Masterpiece production since Bleak House (Little Dorrit was nothing to sneeze at either, hmm?). I am going to try my best to get my review of Part Four up tonight, and then maybe a "wrap up" post once I watch the unedited series on DVD. It's going to be a while before I get tired of talking about this one. :)