Review: Jane and the Unpleasantness at Scargrave Manor by Stephanie Barron 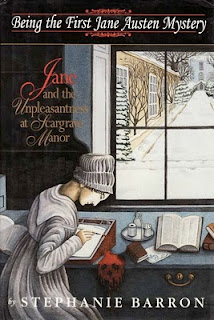 On a visit to the estate of her friend, the young and beautiful Isobel Payne, Countess of Scargrave, Jane bears witness to a tragedy. Isobel's husband - a gentleman of mature years - is felled by a mysterious and agonizing ailment. The Earl's death seems a cruel blow of fate for the newly married Isobel. Yet the bereaved widow soon finds that it's only the beginning of her misfortune...as she receives a sinister missive accusing her and the Earl's nephew of adultery - and murder. Desperately afraid that the letter will expose her to the worst sort of scandal, Isobel begs Jane for help. And Jane finds herself embroiled in a perilous investigation that will soon have her following a trail of clues that leads all the way to Newgate Prison and the House of Lords - a trail that may well place Jane's own person in the gravest jeopardy.

The Unpleasantness at Scargrave Manor is the first in a series of novels that purports to be based on "long lost" Austen journals -- journals where, shockingly enough, Jane is revealed to have an aptitude for solving crimes. Perhaps even more shocking is how well the concept works in Barron's execution of the story. Through novels like Pride and Prejudice and Emma, Austen revealed herself possess a masterful understanding of human nature and all its foibles, and this skill lends itself well to casting Austen as an unconventional investigator with a flair for understanding the criminal mind.

Since relatively little is known of Austen's life, there's plenty of opportunity for an Barron's imagination to fill in the gaps. She grounds her stories in what little is known of Austen's life. In the case of Scargrave Manor, the fact that Austen had once received and refused a proposal from a Harris Bigg-Wither serves as the impetus that allows Barron to send Jane to the home of a beloved -- but entirely fictitious -- friend in order to recover. Soon after her arrival, Jane finds herself embroiled in not one, but two cases of murder most foul, with her beloved friend Isobel standing accused of murdering her husband. Isobel begs Jane to employ her acute powers of observation in order to discover the truth of the matter, and so the chase is on for Jane to discover the truth before Isobel is brought to trial before the House of Lords.

Barron's first novel featuring Jane Austen in the role of sleuth succeeds on all fronts -- it's an incredibly engaging, fast-paced read, rich with historical detail (supplemented by select footnotes which aid in giving credence to the assertion that the story is an edited "journal"). Most enjoyable of all is the experience of seeing inside Jane Austen's head, albeit a fictitious Austen. The story's prose is rich with the language and customs of the early nineteenth century, and it's an enjoyable escape to read a novel that pretends to flesh out the character of one of the most beloved, but mysterious, novelists of all time. All in all it's a thoroughly enjoyable and absorbing read.

This review was written back in 2007 on my old blog - that is how long I've been "meaning" to officially review all of Stephanie Barron's delightful Jane Austen mysteries (sad, I know, but such is the state of my TBR pile). This is the fourth or fifth time (honestly I've lost count) I've read Jane and the Unpleasantness as Scargrave Manor, and revisiting Jane's first case for the Being a Jane Austen Mystery Challenge and and the Historical Fiction Reading Challenge has proven to be just as delightful and absorbing an experience as the first time I delved into the novel's pages, completely unaware of the treat that awaited me there. That, my friends, is the mark of an enduringly good read. :)

Click to visit author Stephanie Barron's blog and read her thoughts on Scargrave Manor. And if you haven't read the book for yourself, well, what are you waiting for?!

P.S.: I'd forgotten (shocking!) how much I adore Lord Harold Trowbridge. Yowzers.
Posted by Unknown at 6:49 AM

What an absolutely fabulous review, Ruth -- how can anybody possiby top this one?! (And better late than never abouting posting those reviews, right?)

I've just begun reading it, so it looks like I have a great book ahead!

How very cool. I hadn't heard of this before.

I remember seeing this book when it first came out, and I wanted to read it. But for some reason I never got around to it.

This one is on my 2011 TBR list (got it set for a couple challenges, so I'll actually move it off the TBR pile). So, I didn't read your reveiw too closely. I'll have to come back after I've read it and see if we agree on all points.

@Joanne - Aww, thank you - so sweet of you to say! :) I really look forward to reading your take on Scargrave Manor - I do so hope you are enjoying it!

@Juju - Barron's books are AWESOME, you should definitely check them out!

@Bev - Oh, please do come back and share you thoughts - I hope you enjoy this one too!

Brooke from The Bluestocking Guide said...

Here is my review of the first book

@Brooke - How funny that we both reviewed this title originally in 2007! Thanks for dropping by!