Review: I'll Be Home for Christmas by Julie L. Cannon 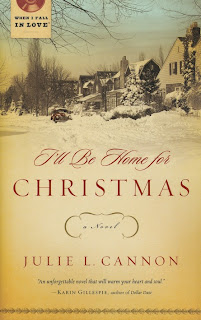 It's Christmastime 1944 and Maggie Culpepper finds herself far from home and those she holds dear. With the U.S. at war and Maggie's heart reeling from the death of her saintly mother, she had impulsively stumbled into a recruiting center and enlisted in the U.S. Navy WAVES. Anger at God and fear of the out-of-control feelings that accompany love caused her to run from the proposal of William Dove, her boyfriend and longtime neighbor

Though a childhood bout with polio left William physically unfit for military service, he wages an all-out battle to recapture Maggie's heart. Will Maggie ever be able to open her heart to love again...and find her way home for Christmas?

For most of Maggie Culpepper's teenage years, the United States has been at war. But in December 1943, Maggie's heart is at war over more than the future of her country. She finds herself finally falling head-over-heels for her best friend William Dove, exempt from military service due to a childhood battle with polio. At the same time she faces the potential loss of her mother, suffering from a debilitating illness. The fragile threads that hold Maggie's life together rip apart when her mother dies. Angry at God for not answering her prayers, and rejecting love out fear of the pain of loss, Maggie enlists in the Navy WAVES and flees her Georgia home for training grounds in New England. But closing the door on her past isn't as easily done as Maggie hoped, as she finds that William's love and the God she rejected aren't easily dismissed.

I'll Be Home for Christmas contains many of the elements I look for in historical fiction - a World War II-era setting, nostalgia and patriotism, and classic standards like the song from which the novel takes its title. That said, these elements didn't quite gel for me. Maggie is an extraordinarily difficult character to feel any sympathy for - yes, she's suffered tragic loss, but her tendency towards self-centeredness seems a tad overdone. Her constant rejection of Will's overtures seemed melodramatic and unnecessarily mean-spirited. Cannon drops many interesting wartime facts throughout the novel, but most of these are delivered through Maggie's attempts to divert conversation from personal matters. I get that it is supposed to be a personality quirk, but it resulted in choppy dialogue. The pages and pages of introspection and Maggie's proclivity to lapse into lengthy dreams about her past with William also slowed the pace of the narrative to a crawl. If these "quirks" or flashbacks were employed more sparingly, their effectiveness would increase, heightening their impact and tightening the narrative flow.

However, on the flip side William's scenes flowed more smoothly and provided a great glimpse into life on the wartime homefront from the perspective of a man classified 4-F (unfit for military service). William's compelling struggle with being the "one left behind" and how that impacts his self-worth is a perspective not often seen in WWII-era fiction. I also loved the fact that William's family owned the local Christmas tree farm - his work was an innovative tie-in to the novel's Christmas theme. I also have to applaud Cannon for her exploration of physical and spiritual "homecomings" by tying Maggie's emotional journey to the classic title song. If the lengthy, repetitious introspective passages were judiciously trimmed, giving the storyline more focus, I could easily see Maggie and William's story translated into a made-for-TV holiday film. The nostalgia factor would be irresistible! While the faith aspect of this storyline tended to be heavy-handed and preachy, I loved the "Longest Night" service that becomes Maggie's turning point - it was a beautiful illustration of faith in the face of shattering loss. While personally I feel Maggie and William's story would work better a short story, Cannon's exploration of homecoming and glimpse into wartime homefront life will provide fans of sweet, nostalgic fiction with much to enjoy - the final package just didn't work for me as I'd hoped.
Posted by Unknown at 10:37 AM

I haven't heard of this one. Sounds good.

@Juju - It may be more your "cup of tea" than mine, Juju. :) If you read it I will be curious to hear your thoughts!

@Jen - It was ok, in parts. A mixed bag for me. I would be curious to hear your take on it!