Review: From a Distance by Tamera Alexander 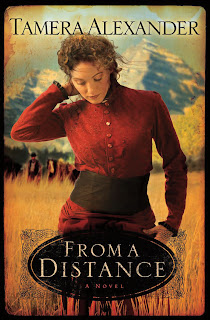 What happens when the realization of a dream isn’t what you imagined…and the secret you’ve spent a lifetime guarding is finally laid bare?

Determined to become one of the country’s premier newspaper photographers, Elizabeth Westbrook travels to the Colorado Territory to capture the grandeur of the mountains surrounding the remote town of Timber Ridge. She hopes, too, that the cool, dry air of Colorado, and its renowned hot springs, will cure the mysterious illness that threatens her career, and her life.

Daniel Ranslett, a former Confederate sharpshooter, is a man shackled by his past, and he’ll do anything to protect his land, and his solitude. When an outspoken Yankee photographer captures an image that appears key to solving a murder, putting herself in danger, Daniel is called upon to repay a debt. He’s a man of his word, but repaying that debt could bring secrets from his past to light.

Forced on a perilous journey together, Daniel and Elizabeth’s lives intertwine in ways neither could have imagined when first they met…from a distance.

Elizabeth Westbrook’s dream of becoming a newpaper photographer whose work is accepted under her own name (instead of a male pen name), is put to the test when she travels to the untamed Colorado Territory. Her assignment is to take pictures of the area’s majestic countryside and surreptitiously investigate the feasibility of investors back east developing the area around the town of Timber Ridge into a resort property. Elizabeth is a strong, prickly character whose occasionally abrasive manner can be a little hard to take. However, Alexander does an excellent job of balancing Elizabeth’s drive to succeed with her fears and insecurities. Her brash manner is extremely realistic compensation for a lifetime of hurt and struggle. In a society that held certain limited expectations for the role of women, Elizabeth bucks convention on multiple fronts.

Daniel Ranslett, who served as a Confederate sharpshooter in the war, immediately clashes with Elizabeth. He doesn’t understand her drive and she doesn’t understand his enigmatic manner and reluctance to serve as her guide. However, his loner status masks pain of a different sort – the mental and emotional toll of combat. Daniel is a wonderful hero – though he’s a wounded, gentle spirit he possesses a core of unwavering moral strength and character. He’s the perfect foil for Elizabeth, who has some tough lessons to learn about truth and honor while in turn he must learn about brokenness and trust.

From a Distance is a beautifully crafted, thoroughly absorbing novel full of richly drawn, unforgettable characters. There’s a dash of mystery, but the real strength of the novel is the journey Elizabeth and Daniel undergo towards surrender. Elizabeth and Daniel are two of the most well-drawn, imperfect characters I’ve ever run across – you know characters are “real” when you alternately want to shake them when you’re frustrated, empathize with their hurts, and cheer at their triumphs. As a native of Tennessee and an amateur Civil War history buff, I loved how Alexander wove together snippets of Tennessee and Civil War history into her Colorado frontier-set story. While the action of the novel takes place ten years after the end of the Civil War, Alexander does a beautiful job of showing the heartbreaking, far-reaching cost of that conflict on its survivors. I also enjoyed learning about photographic processes in the 1800’s – it’s eye-opening to read about the processes and Elizabeth’s job struggles in an era when cameras (and women in the workforce) are taken for granted. This is a novel about choices – how one chooses to overcome tragedy, health problems, trust issues – and God’s sovereignty and care over even the most minute details of one’s life. When the dreams they cling to are stripped away, Daniel and Elizabeth’s story shows how in vulnerability and brokenness God pours out blessings and strength and dreams much greater and more rewarding than one’s human frailty can possibly imagine.

I originally reviewed From a Distance way back in September 2008. I'm finally (FINALLY!!) diving into book two of the trilogy, so I thought now was a good time to add this review to the blog.
Posted by Unknown at 7:18 AM

I've only read one or two Tamera's early books. Sounds like I need to get some of her more recent ones!

Oooh, I loved this book. I read it a few years back. It was the first book I'd ever read by Tamera Alexander and it put her on my must read list! I looked for her back titles after this one.

@Joy - She is SUCH a good author! I'm looking forward to her future projects!

Loved the books in that series, shes such an awesome author, thanks for the review
In Christs Love
Michelle~

Ruth, I LOVE your review!! This is one of my favorite books ever and you described it so beautifully! Tamera knows how to write a hero and Daniel is one of her best *swoon* I loved the interaction/dialogue between him and Elizabeth. Elizabeth becomes more likable as the story goes on but her abrasive manner in the beginning is sort of understandable considering all her hardships. This is the kind of book that makes me wish I had the time to join Amber's re-reading contentment challenge! Too many new books to read at present but hopefully I'll be able to visit Timber Ridge again in the future! I know Tamera said something about a new 6 book series coming out soon, but I'm not sure if its this year or next? I think she said it was set in Georgia? Have you heard anything about it?

Back to your review, again, your wording is perfect, making those who have already read it relive all its wonder and convincing those who haven't read it yet that they simply have to! I also notice in your reviews that you drop a line or two here and there that describe the story so well and so beautifully with just a few words. It reminds me of something you would see on the back cover of a book for endorsement. Like here: "From a Distance is a beautifully crafted, thoroughly absorbing novel full of richly drawn, unforgettable characters. There’s a dash of mystery, but the real strength of the novel is the journey Elizabeth and Daniel undergo towards surrender." I'm really new to the whole book review thing so is that by design? I was just curious :)

@Michelle - I agree, TA is a wonderful author! And you are welcome for the review, thanks for the comment. :)

@Amanda - Girl you made my day with your sweet words, thank you so much! :) I have heard just a bit about Tamera's new series, the first book is slated to debut this fall (I believe it's called Lasting Impression?), and if I recall correctly, when I spoke with her at a booksigning last year she shared that the series is set in the south & centered around plantation homes (I think??? My memory is hazy on the last point...but I remember houses figure into it! *wink*).

As to my review "style," I guess I could say, when I started writing reviews years ago my format/structure was based on the type of book reviews I learned to write for one of my college history classes. Basically summary, highlights/drawbacks, conclusion. I don't remember when I realized I do this, but a while back when I was writing a review for one of Susan May Warren's novels I caught myself asking myself "What's the money quote going to be?"

Now I have no idea where I came across the term "money quote," but my "definition" has been the takeaway, the main pitch, the point where I try to focus as succinctly as possible on why I think others should read the book in question. I googled the term and the best definition I found was here: http://www.nytimes.com/2005/03/13/magazine/13ONLANGUAGE.html?_r=1 - "the essence, or most newsworthy part of the statement."

So I realize this is probably WAY to much information, I suppose the short answer is that yes it is by design, though it started unconsciously. :)

I remember when I read this I had no idea how much I'd love it. :)

I knew you were the one to ask about Tamera new stuff! :D Thanks for sharing what you know as it sounds very interesting and I'll be sure to keep an eye out!

And I like that, "the money quote" :) You certainly do know how to write those, my friend ;) You really do write some of the best reviews I've ever read so all the info/tips you gave is actually very helpful to me. Happy reviewing :)

P.S. - Thank you so much for posting a link on my Goodreads page to make sure I got it. You are so sweet :)

@Amy - Thanks so much for dropping by! And thanks for the feedback - Tamera Alexander's books are just amazing, and she's such a classy lady in person to boot. :) I hope to have my review of #2, Beyond This Moment, posted soon!

@Amanda - LOL, I try to keep up with book news! :) And I'm glad my review "process," such as it is, made sense. Sometimes trying to make sense of what goes on in my head is a trial, LOL! *wink* And I'm so happy you've been enjoying my reviews - for the record you leave great comments too! :)