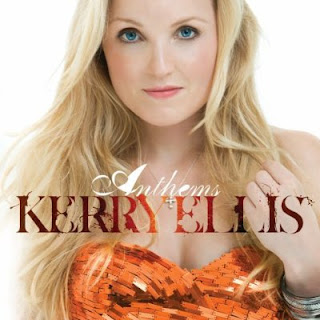 With soaring pop vocals and anthemic orchestra-meets-rock arrangements, Kerry Ellis makes an unforgettable statement with her debut album, Anthems. I’m a huge fan of classical crossover music (i.e. Sarah Brightman) and have a fairly extensive collection of solo albums from various theater stars. Anthems is a standout project in both categories. Ellis is perhaps best known as the longest-running British actress to play Elphaba in the musical Wicked, playing the role on both the West End and Broadway stage. Many times when theater stars put out albums, they choose to record fairly straightforward versions of musical theater standards, not so with Ellis. Partnered with Brian May, lead guitarist from Queen, Anthems is an inspired fusion of rock-orchestra melodies paired with Ellis’s soaring, passionate vocals. The album opens with the exotic Brian May-penned track “Dangerland,” reminiscent of “Fleurs Du Mal” from Sarah Brightman’s rock-inspired Symphony album, with a distinctive Middle Eastern vibe. Ellis then moves on to a soaring, rock-tinged version of “Anthem” from the musical Chess – her voice soars, and the blistering guitar solos transform the track into an arena-ready anthem. Two tracks from Wicked make appearances with fantastic new arrangements. “Defying Gravity” is transformed into a rousing, rock-driven anthem of empowerment, while “I’m Not That Girl” is an absolute showstopper, one of my favorite tracks on the album. Ellis’s powerful pop voice shines on this song, simultaneously both poignant and hopeful. Another favorite track of mine is a cover of the Brit group The Feeling’s “Love It When You Call,” which is given a rocking “girl group” sound. I absolutely LOVE Ellis’s interpretation of “Diamonds Are Forever” – it’s great to see a classic James Bond theme revisited. Shirley Bassey owns this song, but Ellis fearlessly takes it on and makes it her own. The album ends with a pair of Brian May-penned tracks – a gorgeous, powerful rendition of Queen’s “No One But You (Only the Good Die Young)” and the beautiful and poignant “I Loved a Butterfly.” Kerry Ellis’s debut is a standout. The press release in the product description section of Amazon states that “Broadway’s about to get a little bit grittier” with Ellis’s debut – and to that all I can say is more, please. Kerry’s powerhouse vocals married to musical theater-meets-rock-orchestra-fusion is an addictive combination.
Here's a brief video to give you a taste of Kerry's sound:
Posted by Unknown at 4:32 PM

@Juju - I am totally addicted to this CD, I just love it!

Oh, she was in CHESS, with Josh Groban and Idina Menzel. Though I don't much like how that story developed I sure loved the individual performances.

@Lori - You know, I've never been able to get into the story of Chess, though "Anthem" is one of my all-time favorite musical theater songs. I love Kerry's performance on this CD (and of course Groban's, and Linda Eder has an excellent version on her Broadway, My Way CD).

Just wanted to leave you the link to the treasury that I accidentally left out of my blog post. :) Here it is: http://www.etsy.com/treasury/4cc9d61f5eb58eef4a5b8916/its-the-pictures-that-got-small .

@Kristin - Thanks so much! I clicked on the Cary Grant pendant and actually ended up ordering 3 this morning. LOVE them!

I'm so glad! I love to spread the word about lovely Etsy shops/items that I come across. I actually just bought one of the "Keep Calm and Cary Grant" pendants today! :) I couldn't resist. A Cary Grant necklace is one of the neatest things I can imagine as a classic movie fan. :)

Ruth, it was because of the lousy choices the characters made, and the mess of loose threads hanging all over the place at the end. Not at all satisfying. But the singing was awesome so I still put in the DVD and listen to my favorite songs. Anthem is one of those.

@Lori - They did put some phenomenal vocal talent together for that concert!

@Kristin - Ooops, forgot to respond to your comment! :) I am so excited about my necklace purchases, I can't wait for them to arrive! I'm already thinking of possible Christmas gift ideas. Thanks so much again for spreading the word about great classic Hollywood-themed gifts on Etsy. Keep the recommendations coming!

Wow, I've never heard of Kerry Ellis. Thanks for the album tip! Can't wait to check it out since she starred in the best musical ever!

@Jenny B. - You are so welcome, hope you enjoy it! I haven't been able to stop listening to it since I purchased it over a week ago!