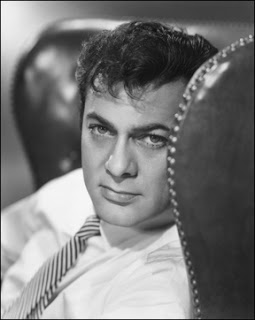 I was so sad to hear about the passing of actor Tony Curtis yesterday. Growing up, he was one of my favorite actors – from the moment my parents got cable, and back when AMC showed real classic movies, I developed a huge crush on him. While he’s best known for films like Some Like It Hot or his Oscar-nominated turn in The Defiant Ones, I wanted to take a moment to shine a spotlight on what are perhaps a few of his lesser-known roles, especially the early gems that led to my ten year old self developing a huge crush on the actor. Curtis excelled at playing “lovable rogues,” and that descriptor is a pretty common theme in my favorite Curtis films.
First up, we have two films Curtis made opposite actress Piper Laurie – The Prince Who Was a Thief and Son of Ali Baba. They are also two films high on my wishlist of classics that have yet to make it to DVD. Curtis and Laurie made a fantastic on-screen couple, and if you like Technicolor adventures with a healthy dose of cheese you’ll be hard-pressed to do better than these two films. 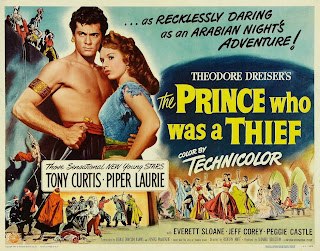 
In 13th-century Tangiers, regent Mustapha hires master thief Yussef to murder the baby Prince Hussein so Mustapha can take the throne in the infant's place. Yussef, too kind-hearted to kill the boy, instead adopts him and rears him as a peasant named Julna, with the mark of the rajah tattooed on his arm. Eighteen years later, Julna now reigns as the city's master thief and ladies' man, but becomes smitten by Prince Mustapha's beautiful and cunning daughter, Princess Yasmin.

You can read the rest of the film’s summary at the TCM website. 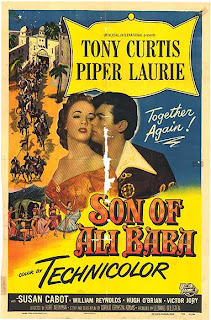 Son of Ali Baba (1952):
In medieval Persia, Kashma Baba is a military cadet by day and a roisterer by night. The morning after a rowdy banquet, Kiki, an escaped slave, takes shelter under Kashma's roof. Word comes that the wicked Caliph is looking for her; but Kashma, by this time in love, flees with her to his father's palace. Alas, there's more to Kiki than meets the eye. Will the evil schemers succeed? The sons of the Forty Thieves to the rescue! (Summary from TCM)

This next film is another one of my all-time favorites. Yet another one of my long-time obsessions has been with stories of knights and their chivalrous exploits. The Black Shield of Falworth is a fun, fast-paced, colorful, epic adventure that features Curtis opposite his wife of the time, actress Janet Leigh. Happily, this film is available on DVD through Amazon. 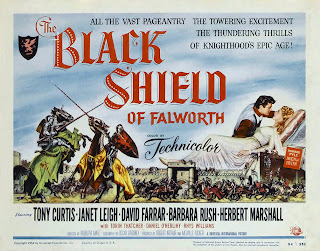 Technicolor & tights. In the days of King Henry IV, stalwart young Myles and his sister Meg have been raised as peasants, without any knowledge of who their father really was. But one day they journey to Macworth castle. There Myles falls in love with the Mackworth's daughter Anne, makes friends and enemies, and learns to be a knight so that, through the planning of Mackworth and his friend, Prince Hal, Myles can regain his true birthright from the evil Albon, and bear the black shield of Falworth. (Summary from TCM)

I first saw Kings Go Forth when TCM celebrated the life of Frank Sinatra by making him the Star of the Month (I guess this was about two years ago). Well, I’m a fanatical Sinatra-phile, so a month devoted to the film work of the Chairman of the Board was a dream come true. I’m long overdue for a re-watch of Kings Go Forth, but it left a deep impression on me as a highly watchable film filled with understated performances and a thought-provoking storyline. 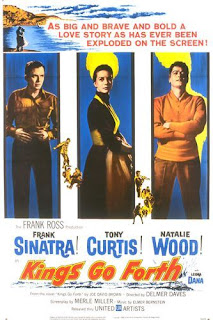 Frank Sinatra, Tony Curtis and Natalie Wood star in this searing war drama that packs plenty of explosive excitement and fervent passion. Directed by Delmer Daves (The Badlanders) from Joe David Brown's gripping postwar novel (screenplay by Merle Miller), Kings Go Forth weaves elements of romance, war and miscegenation into a powerful, compelling and riveting film. In WWII France, Corporal Britt Harris (Curtis) is assigned to work alongside war-weary Sgt. Loggins (Sinatra) a man he soon rivals for the affections of the beautiful Monique Blair (Wood), an American who grew up in France. But when the men learn that Monique's parents are racially mixed, it tests the character of each...and provides the powerful thematic framework that shapes Kings Go Forth into a hard-hitting and still timely film. (Amazon product description)

I was introduced to the film Captain Newman, M.D. when I received a boxed set of Gregory Peck films one year for Christmas. While Peck is the star of the movie, Curtis’s character is memorable and all of his scenes are quite enjoyable. You can watch this movie on YouTube starting here, or purchase it as part of the Gregory Peck film collection from Amazon. 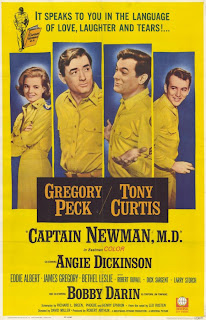 Captain Newman, M.D. (1963):
In 1944, Capt. Josiah J. Newman is the doctor in charge of Ward 7, the neuropsychiatric ward, at an Army Air Corps hospital in Arizona. The hospital is under-resourced and Newman scrounges what he needs with the help of his inventive staff, especially Cpl. Jake Leibowitz. The military in general is only just coming to accept psychiatric disorders as legitimate and Newman generally has 6 weeks to cure them or send them on to another facility. There are many patients in the ward and his latest include Colonel Norville Bliss who has dissociated from his past; Capt. Paul Winston who is nearly catatonic after spending 13 months hiding in a cellar behind enemy lines; and 20 year-old Cpl. Jim Tompkins who is severely traumatized after his aircraft was shot down. Others come and go, including Italian prisoners of war, but Newman and team all realize that their success means the men will return to their units and combat. (Summary from the IMDB)
I can’t remember when I was first introduced to the movie Goodbye Charlie, but it’s been a favorite ever since. It is too funny for words! The film can’t be purchased on DVD, but thankfully it can be rented or purchased through Amazon’s Video On Demand service. You can also watch this movie on YouTube starting here. 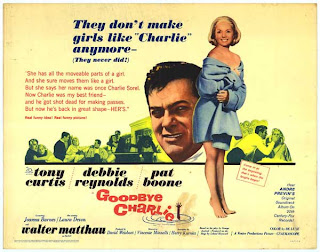 When a cavorting Hollwood writer is killed by the angry husband of a woman he was having an affair with, he comes back as a spirit in the form of a beautiful woman and moves in with his/her best friend as a base of operation for enacting sweet revenge. (Summary from TCM)

And here's a scene where Tony meets the "new" Charlie (a.k.a. Debbie Reynolds):

If you're a fan of classic romantic comedies like Pillow Talk starring Doris Day and Rock Hudson, I highly recommend my final film in this little "tribute" list, Sex and the Single Girl starring Curtis opposite Natalie Wood. This movie is available on DVD through Amazon, or you can watch it on YouTube starting here. 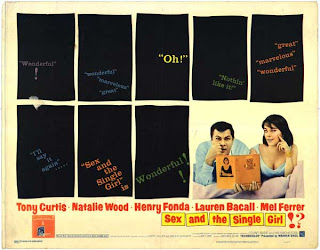 A womanizing reporter for a sleazy tabloid magazine impersonates his hen-pecked neighbor in order to get an expose on renowned psychologist Helen Gurley Brown. (Summary from the IMDB)

It's dated, sure, but Curtis and Wood have great on-screen chemistry, and Tony Curtis is, frankly, quite adorable by the end of the film. Plus, there's the added fun of seeing Henry Fonda and Lauren Bacall ham it up for the camera as a perpetually bickering married couple that live near Curtis. Here's the film's trailer:

Well...this turned into a post of epic proportions, no? :) If you've made it this far, congratulations. My hope is that this little retrospective of mine might inspire you to seek out some great classic movies. Mr. Curtis - you were a larger than life figure in Hollywood and your presence will be missed. Thanks for the memories.
Posted by Unknown at 7:05 PM

I loved Tony Curtis too! Great post, I will be back to read this in depth. There are lots of movies here I had never heard of. I still remember being shocked when I saw him play "The Boston Strangler" on a late night movie.
He was equally talented in comedy and drama -- something I am sure that Richard Armitage will excel in as well -- if he is ever given the chance!

I spent my summers watching AMC, too! But my old timey actor crush was Montgomery Clift.

@Juju - I know, I was so bummed to hear it myself!

@phylly3 - Thanks so much. I have never actually seen his Boston Strangler movie...I definitely gravitated toward his lighter, more comedic roles. And I hear you on RA being given that chance...looking forward to it! :)