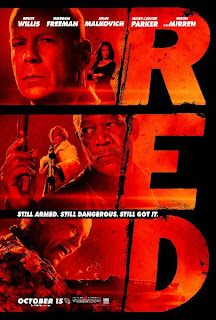 Friday I went to see the new Bruce Willis movie Red with Lori, capping off a day of shopping and eating and enjoying the fantastic fall weather in general (though it’s still a little too warmish some afternoons for my tastes!). I should note, in case you haven't guessed this from reading my blog, that going to see Bruce Willis movies is REALLY out of the norm for me. But this one intrigued me for a couple of reasons - I love a good spy story, especially one with a "lighter" touch (i.e., the TV show Covert Affairs or the old Hepburn/Grant classic Charade), plus Karl Urban looked drop-dead gorgeous in the trailers. Hey, this blog is all about being open & honest as regards all things in the entertainment world, right? *g*
I also have to add, I think it's kind of funny that in the last four months we’ve seen three movies (at least – let me know if I’m forgetting something) involving plucky, innocent women who get thrown into the high stakes world of spies because they fall for an undercover agent. They then must end up learning to hold their own, etc., against unimaginable danger, and of course end up loving the spy lifestyle. Quite the trend, no? First there was Killers. This could have been a really cute movie about spies in suburbia, but the not-so-dynamic combination of Katherine Heigl and Ashton Kutcher made it fall flat (you may have noticed that I never blogged about this movie - not worth the space IMO!). This was followed by the Tom Cruise/Cameron Diaz flick Knight & Day, which was brilliant fun, I absolutely loved it! And now Red, which was not quite as good as Knight & Day in my estimation, but was pretty fun overall, and I enjoyed it way more than I expected.
I don’t know what I was thinking, exactly, going into the movie, but I certainly wasn’t expecting Red to be as quirky and odd and funny as it was. It seems very out of the norm for a Bruce Willis movie, but I’ve got to say he handled the light comic tone of the film pretty well IMO. The ensemble cast is what really makes this movie work. It is of course led by Willis as a retired CIA operative, Frank Moses, who has found it quite hard to adjust to living a “normal” suburban life. He was forcibly retired code “red” (not for communist, LOL…for retired, extremely dangerous). The one bright spot in his hum-drum existence is when his pension checks arrive, which he promptly tears to pieces, and then he calls his favorite pension customer service rep (played by Mary-Louise Parker). The two chat about growing avocadoes and romance novels and her desire to travel (and I’ve got to say, the idea alone of Bruce Willis reading Harlequins in order to impress a woman is pretty funny). Parker is completely believable as a tired, disillusioned woman whose life hasn’t turned out anything remotely like what she’d imagined. It’s quite fun watching her warm to the idea of embracing the life of a fugitive and spy.

Frank’s old spy crew is made up of Joe (Morgan Freeman), who can’t believe he’s lived long enough to be in a retirement home dying of stage four liver cancer (and seriously, for someone at stage four of anything he’s remarkably spry…gotta love the movies!), Marvin (played by a scene-stealing John Malkovich), and Victoria (played by Helen Mirren). Malkovich and Mirren were by far my favorite characters out of the group of retired spies. Malkovich’s character is absolutely crazy, though it should be noted that his insanity isn’t entirely his fault. Turns out some of his conspiracy theories were true, since he was the subject of some “tests.” I absolutely LOVED the scenes of Malkovich with the stuffed pig – hilarious! Mirren was quite a surprise in this movie. Playing a spy and hardened killer is quite out of the norm for a woman who has often played such refined, aristocratic characters. I mean c’mon, she’s brought Elizabeth I and II to life on the screen! It is glaringly apparent, I think, that Mirren had the time of her life playing against type here, and it gave her a welcome chance to showcase her rather dry sense of humor. Besides the novelty of seeing Mirren shooting up the screen, I loved the “forbidden” romance she had with a Russian agent, played by Brian Cox. Their scenes were priceless, the fallout from their Cold War-era romance so dramatic and over-the-top! Cox was great casting as a Russian agent who misses the good ol' Cold War days.

It was great fun seeing Karl Urban on-screen again. Since his turn as Eomer in The Lord of the Rings trilogy, there hasn't been a whole lot I've been interested in seeing him in to be quite honest, the notable exception being the reboot of Star Trek. And even the latter was somewhat diminished by his accent...I know it worked for the character, but that and the gosh-awful hair just detracted a bit from the awesomeness that is Karl, if you know what I mean. *wink* Anyway, here Urban is quite dangerous and sophisticated as Frank's nemesis (or is he?), the CIA operative tasked with eliminating the RED agent. One of the movie's highlights, I've got to admit, was watching Willis beat up Urban. Talk about a fight for the record books, LOL!

There are a couple of other cast members whose appearances are definitely worth mentioning. I'll start with Richard Dreyfuss as the unscrupulous businessman, Alexander Dunning. I have to admit, the first thought that ran through my mind when Dreyfuss appeared on-screen was "Mr. Holland's gone bad!" *wink* Dreyfuss appeared to be having great fun with this role, and his manic villain made me think he'd have played a decent Bond villain in the pre-Daniel Craig days. Julian McMahon makes an appearance late in the game as the Vice President trying to tie up loose ends so nothing interferes with his aspirations for a run at the presidency. McMahon has such a square-jawed, strong personality look to him, was fun to see him play against that as a power-hungry character who is really just a snivelling coward at heart. And last but certainly not least I have to say it was a real treat to see Ernest Borgnine on-screen again as Henry, the records keeper. People, Borgnine is 93 years old, believe it or not, and still going strong! Talk about being an inspiration!

I understand that Red is based on a graphic novel, which I know absolutely nothing about so I have no idea how this filmic adaptation holds up against the source material. The movie does have a rather episodic feel, which is aided by the funny postcards thrown up on-screen every time the characters travel to a new city in their quest to survive and take out the bad guys. It's a fairly fast-paced movie, with nary a dull moment, but it does occassionally feel a little choppy editing-wise. Part of that may be due to the nature of the source material from which the story is drawn, and it's not enough of an issue to keep one from getting involved in the story in my view.

Red was a nice surprise. Not an all-time favorite or anything like that, but it's a highly enjoyable action flick, and I suspect it is probably accessible to a larger-than-usual audience for a Bruce Willis film thanks to the movie's comic touches, balancing out the requisite PG-13 levels of action movie violence. I actually wouldn't mind a sequel (just sayin'...).
Posted by Unknown at 3:01 PM

I REALLY want to go see this one (and not just because of my Karl Urban obsession). So once I get this book finished (if I ever do---took the afternoon to brainstorm story ideas since my two-page, very generic synopsis just didn't give me much to go on storywise), if you're up for seeing it again, I'm going to want to go!

@Kaye - I could be persuaded, especially if we could somehow make a matinee!

Brilliant! Thanks for the review! :) Saw the trailer on TV the other night and thought it looked like fun, but I knew nothing about it. Meant to look it up on IMDb but kept forgetting. Your review told me everything I needed to know. Sounds like something worth watching!

With quirky and funny Bruce Willis movies, I think immediately of The Whole Nine Yards and especially the sequel, The Whole Ten Yards, where Willis's hard-boiled assassin character decides to mellow down and get in touch with his feminine side. Had me in stitches! :D

@Traxy - You are welcome! Hope you enjoy Red. :) Truth be told, most Bruce Willis movies never make a blip on my radar...so I am not surprised to hear that I'm quite ignorant of some of his quirky/funny roles. ;) Thanks for enlightening me. It really is funny watching such a "manly" guy act all sappy one second and then beat up Karl Urban the next. :)