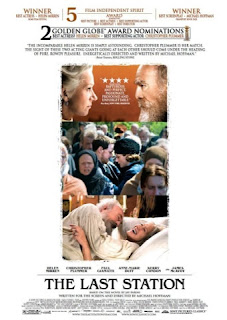 Apparently I’m on a Russian movie kick this week. I’ve watched The Last Station two or three times now, so I suppose it’s about time I review it. The film is a fascinating look at the last year in the life of a literary giant, Count Leo Tolstoy. This movie is based on a novel of the same name by Jay Parini, and it’s safe to say that both the film and book take some license with history, as to be expected. If anything, from what I can gather from a cursory reading of some of the biographical information available about Tolstoy on the internet, he was probably more difficult to live with than the movie depicts.

Tolstoy is brilliantly played by Christopher Plummer. Plummer plays the venerable writer with a sort of wry awareness – he’s famous and revered and highly aware of it, but there’s also the occasional acknowledgement that he doesn’t take himself quite as seriously as those who look to him for leadership and guidance. I had no idea there was such a “cult of celebrity” surrounding Tolstoy – there was the 1910 version of the modern paparazzi laying in wait around his home, hungry for the latest bit of family gossip, or for his latest writing or stance on current issues to be released. Helen Mirren plays Tolstoy’s passionate and long-suffering wife, Sofya. Whenever the two of them appear on-screen, sparks fly – Plummer and Mirren are truly one of the most memorable screen couples I’ve ever seen, the on-screen chemistry they exhibit in this film is amazing. I have got to say, despite all of Tolstoy & Sofya’s ups-and-downs, I loved seeing such a passionate marriage, between older people, portrayed on-screen. At the end of the day they loved each other – the fights and disagreements were outgrowths of the clash between their passionate, vibrant personalities. When they were good, things were very, very good – and when they were bad, things were horrid. But even in the bad times shown in this film, Tolstoy and Sofya had a love and need for each other that could not be denied by ideology or politics.

As portrayed in this film, Tolstoy was an interesting man of contradictions. Incredibly wealthy thanks to the popularity of his writing, towards the end of his life Tolstoy began to advocate passive resistance and came out against government oppression. He also advocated celibacy and shunned private property – two ideas that frustrated his wife to no end. For you see, for a man who claimed to shun sex, Tolstoy apparently really enjoyed it, and had 13 children with his wife (eight of whom survived). Sofya in this movie is a woman who needed that passion and connection, and to have it denied her for any reason proved incredibly frustrating. Also, as someone who played an integral part in forming and supporting her husband’s writing, acting as both muse and confidant, Sofya was also enraged by the idea that Tolstoy would give away his family’s inheritance by leaving the copyright of his works to the Russian people.

Paul Giamatti plays Vladimir Chertkov, a close friend of Tolstoy’s and a leader in the Tolstoyan movement, which advocated all of the ideals set forth in Tolstoy’s writing (community property, celibacy, passive resistance, etc.). Chertkov is Sofya’s great nemesis in this film, as he is intent on using his influence to convince Tolstoy to leave the copyright to his works to the Russian people, his great gift to humanity as it were. As part of his effort to undermine Sofya’s influence in her own home, he selects a new personal secretary for Tolstoy – Valentin Bulgakov, played by James McAvoy. (Allow me to pause here and just say it’s great to see McAvoy in another period film, those are definitely my favorite of his works, besides the fantasy film Penelope). Valentin is an eager disciple of Tolstoyan teachings and is excited for the chance to embrace that lifestyle and work under the great author. Chertkov has other plans – he wants Valentin to keep a diary, documenting Sofya’s “subversive” influence. Valentin’s life becomes extraordinarily complicated when Sofya takes a liking to him as well, and wants him to keep a diary to document her side of the story. I really found the struggle between Chertkov and Sofya fascinating, particularly how Valentin becomes torn between his dream of living a perfect Tolstoyan lifestyle and his growing realization that Sofya’s point of view has merit, even appeal. To complicate matters even moreso for the young secretary, Valentin falls in love with Masha, played by Kerry Condon. Masha is one of the women working at the Tolstoyan commune, but she’s not as devoted to the strict principles of the movement as hard-line leaders like Chertkov would like.

Oh, I can't forget to mention that Anne-Marie Duff also stars in this film (she's James McAvoy's wife), playing Sasha Tolstoy. Sasha apparently acted as her father's secretary and was one of his most ardent supporters. She was also constantly at odds with her mother's view on her father's work. The mother-daughter relationship between Sofya and Sasha brought me to tears at the very end of the film. When Tolstoy's "handlers," including Sasha, finally allow Sofya to come to Tolstoy's side as he lay dying, the way the two women connect, and reach a truce over their mutual grief was absolutely heart-rending. Very, very well played by both Mirren and Duff. Duff, incidentally, is a Masterpiece veteran, having appeared in The Virgin Queen miniseries back in 2005 as Elizabeth I opposite Tom Hardy of Wuthering Heights fame, who played Robert Dudley. (I totally forgot Tom Hardy was in that show, I need to go back & rewatch it!)

This film is a gorgeous work of art. Every frame is filled with eye-popping, gorgeous scenery and practically screams of extreme attention and care to historical detail, from the furniture filling the Tolstoy home to each stitch of clothing worn by the actors. And the score – I absolutely loved it! The music was composed by Russian composer Sergei Yevtushenko. This is a classical score, a throwback in a sense to the great orchestral scores that were the norm in Hollywood’s golden age. The music is a wonderful reflection of Russian culture and the story in general. It quite simply ranks as one of the most beautiful scores I’ve heard in recent memory – loved it!

Ratings-wise, this movie is rated “R” for the sole inclusion of two completely unnecessary s*x scenes between Valentin and Masha, that show off way more of Masha than is necessary if you get my drift. I get how this affair radically changes Valentin's view of the Tolstoyan movement, but there was no need for them to share quite so much skin on-screen, *sigh* If you’re intrigued by the story, those scenes can be easily skipped or fast-forwarded. Other than that, this isn’t a violent film and any language is minimal. It’s a very, very intensely emotional film, though. I think that’s why I like it, though – it paints such a great picture of the passion, joy, and pain that great love, that loving deeply and wholly, can bring to those involved.

The Last Station is a fascinating snapshot of the twilight of a great man's life and his place in Russian history - a Russia on the brink of great social upheaval. The history that serves as the backdrop to this intensely personal drama is a fascinating, tumultuous time. Whether you agree or not with any of the ideaology that drives the characters in this film, it is in some ways one of the most realistic marriages I think I've ever seen on-screen. Tolstoy and Sofya were most definitely not without their problems, and neither of them were anywhere close to perfect - but inspite of all of their problems, the film clearly illustrates how deeply and passionately they loved each other, warts and all, if you will - and I loved that.
Posted by Unknown at 2:21 PM

I'm a wicked girl! The idea of James McAvoy skin made me grin ;)

You've given me another movie to watch! I'll have to look for it at the library. They have it, but since it's new it's rental media. And wouldn't you know, the one at my branch is currently checked out.

So, I really enjoyed this movie, I didn't LOVE it, but enjoyed it.

Can you believe I'm about to admit this... I had NO idea that Tolstoy was into all of the politics and the creator of a whole movement... I mean, I just thought he wrote books :) Silly me. So, I spent have the film in shock because I never knew any of this...
Guess I could use a refresher in Russian anything.

@Liv - Well, I took Russian history in college for one, and I can't recall ever learning anything about the Tolstoyans...if they covered that I must've blocked it out for some reason. :P So yeah, you have company there. :)

I was surprised how much I enjoyed this film overall, but I think a large portion of that had to do with Helen Mirren. She's always lovely and brilliant, but especially so in this -- and she played beautifully off Christopher Plummer. I need to rent it again...

And yes, the sex scenes were totally pointless and stupid. It could have been PG otherwise.

@Charity - Helen Mirren's performance was a tour-de-force! I just love her, she's such a class act and she's absolutely brilliant here.

And I agree 100%...the sex scenese added nothing to the movie except upping the rating. :/