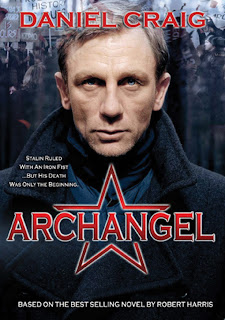 I have to be honest, the initial reason I wanted to watch Archangel was because of this fabulous image on the DVD case. Daniel Craig can be positively mesmerizing, no? *g* But let me tell you, this movie is so much more than just a showcase for Daniel Craig’s fabulousness. Based on the novel of the same name by author Robert Harris (who I've never even heard of till I discovered this film), Archangel is a crackerjack thriller, one where history collides with the present and long-buried secrets surface, threatening the fate of an entire nation.

Here’s a bit about the story from the back of the DVD case:


Archangel tells the story of four eventful days in the life of Fluke Kelso - a dissipated, former Oxford historian attending a conference in Moscow on the newly opened Soviet archives. He is about to leave the city, when a surprise visit from an ex-officer of the Soviet Secret Police changes his mind, revealing a deadly scandal which promises to expose dark secrets from the Russian underworld and the KGB.

When the man is found brutally murdered, Kelso seeks out the victim's estranged daughter to help unravel the mystery, which traces back to the night of Stalin's death.

Teaming up with the stunningly seductive Zinaida, Kelso embarks on a treacherous quest that leads to the remote Russian seaport of Archangel, where the final secret of Josef Stalin has been hidden for almost half a century. Relentlessly pursued by ruthless Russian authorities and immersed in an underground world of violence and intrigue, Kelso and Zinaida must race against time to expose the shocking truth.

Intrigued yet? *g* This made-for-TV film was released the year before what I consider to be Craig’s breakout role as James Bond in the mind-blowing, amazing Casino Royale. That movie, my friends, rocked my world. The international scope and fast-paced storyline of Archangel give Craig the chance to showcase the screen presence that made his take on Bond such a success. His character has the sort of devil-may-care, offhand charm that he gave James Bond - but always, there's an undercurrent of tension and intrigue. Here Craig plays a British professor in Russia giving a series of lectures – the gist of them being stark reminders that Stalin was an evil madman. He discovers that his message is not one all Russians are willing to hear – in a time of economic upheaval, many are nostalgic for the efficient way things were run under the Communist regime. Then everyone had work, and that equaled pride and fulfillment. 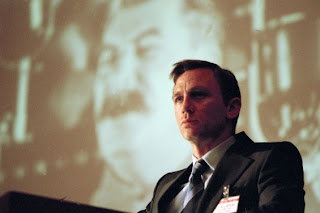 I have to mention that I think Craig’s character’s name is absolutely hilarious – he’s “Fluke” Kelso, the fluke having two possible meanings. 1) His parents had him very late in their lives and 2) the book which won him professional acclaim was published more than five years ago, with no apparent follow-up in sight. When an old Russian man corners Kelso, insisting he has a story worth hearing to share, Kelso is shocked to have a potential find of earth-shattering proportions laid at his feet. His informant, Papu Rapava, was present when Stalin died, and under the direction of Stalin’s chief of security buried a notebook, believed to be Stalin’s diary. Though he spent years in a gulag, Papu never revealed the notebook’s location. Knowing it to be an item of potentially priceless historical and monetary value, Papu came to Kelso with his story, believing his status as a respected academician would authenticate the book, allowing him to leave an inheritance to his estranged daughter. 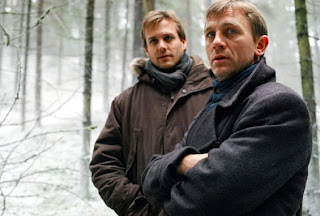 When Papu disappears before giving Kelso the book’s location, this is where things really start to get interesting. I absolutely loved watching Craig’s character comb the streets of Moscow, sitting at the edge of my seat while he’s followed by police and other, more threatening parties who have a vested interest in securing the book and its secrets. The atmosphere the filmmakers created is just incredible, I felt completely immersed in Kelso’s dangerous world. Craig wears the cloak of devil-may-care, brilliant academic well. If the Indiana Jones films were being made today, this role leaves me convinced that Craig would be an ideal choice for putting a modern-day spin on the role of adventuring professor who isn't afraid to put himself in harm's way in order to secure a find or get the story.

To make a long story short, and without (hopefully) giving away too much, Kelso joins forces with Papu’s estranged daughter (Ekaterina Rednikova) and a story-hungry American newspaperman (Gabriel Macht). The unlikely trio soon finds themselves in way over their heads as it becomes clear that Papu’s notebook, and their association with it, has made them pawns in a political power play designed to see Stalin’s legacy resurrected, no matter the cost. I really liked Zinaida's character arc throughout this film. She's been estranged from her father in large part because she works as a prostitute in order to get supplemental income, and also because her father was, well, cold towards his family. The deeper she and Kelso dig into her father's story, the more she comes to realize that many of the factors that made him the hard man she knew were forced on him by a dictatorial system. Perhaps her father's greatest legacy to her wasn't the notebook, but his legacy of survival, no matter the cost.

This movie is such a treat to watch unfold. I loved the way puzzle pieces dropped into place one by one, revealing a plot so unexpected and mind-blowing in its ramifications that it left my head spinning. This was a story I LOVED getting lost in. Not only did it give me two whole hours of Daniel Craig being amazing on-screen, but it played to my love of history – Russian history in particular – and how the past can condition and inform the present. Russia has such a rich, storied past, and the atmosphere, history, and “what if’s” Archangel makes it, in my view, a highly worthwhile movie experience. This is a fast-paced, fascinating film. I loved the filmmakers' pacing and color palette - the washed-out, often bleak look of the settings added to the film's intensity. I also thought they made very effective use of cutting between the present and historical scenes - very nicely done.

I'm going to end my review here...this is one movie that I enjoyed so much I don't want to delve too much into the particulars (hopefully I've managed to find that balance!).

The back of the DVD case label this an "R" rated film - honestly I'm not sure why. It's violent, but I don't feel it's "R" rated in its level or intensity. There is some language, but again I've heard more in many PG-13 releases. Just some things to keep in mind if you're intrigued by the story but like to watch ratings (I totally get that BTW).

You can purchase the Archangel DVD from Amazon here, currently at the fabulous price of only $6.49! TOTALLY worth that price!!
Posted by Unknown at 4:21 PM

Glad to hear this is a good movie... I was intrigued by the cover, too. Daniel Craig--so amazing. :-)

You have me so intrigued, I popped over to Netflix and discovered it's one of their Watch Instantly offerings. Even more affordable. :) And thanks for the rating warning. I usually steer clear of R unless someone who has seen it explains it exactly as you did here. There are a few movies out there that get the rating but are nowhere near as bad as many PG13s.

@Lori - Instant watch, even better! LOL! The ratings system can be so random. I will be very curious to get your take on this. I do hope I don't steer anyone wrong, ever, in explaining things like ratings and my take on their validity (or lack thereof).

This sounds great! Luckily, my library has it available. :D I love Russian history, so I'm very surprised I had not discovered this. Thank you so much for the review.

And yet another movie goes on my "must watch" list. That list is about as long as my arm now! :) Thanks for the review! And yes, Daniel Craig is wonderful ;)

@Michelle - You're welcome! Hope you enjoy it, please come back and let me know your thoughts!

@Terra - Yeah, I live to overload people's must watch/must read/must do lists...LOL! I think you'll like this one. :)

Sounds awesome! I saw the movie on Netflix but skipped right over it, so thanks for giving me a reason to watch! Putting it in my "instant queue" now :)

@Roving Reader - Yay! I really hope you enjoy it!