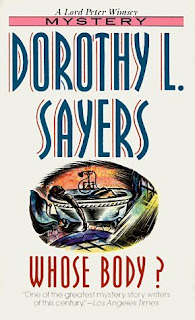 The stark naked body was lying in the tub. Not unusual for a proper bath, but highly irregular for murder - especially with a pair of golden pince-nez deliberately perched before the sightless eyes. What's more, the face appeared to have been shaved after death. The police assumed that the victim was a prominent financier, but Lord Peter Wimsey, who dabbled in mystery detection as a hobby, knew better. In this, his first murder case, Lord Peter untangles the ghastly mystery of the corpse in the bath.

If you've never read a Wimsey mystery, you're in for a treat. With Whose Body?, Dorothy L. Sayers introduces the delightfully witty and urbane Lord Peter Wimsey, gentleman detective. First published in 1923, Lord Peter's first documented case opens on a particularly curious note - thanks to a tip from his mother, the Dowager Duchess, he's called to investigate the sudden appearance of a dead man wearing nothing but a pair of gold pince-nez in the bathtub of an acquaintance. Wimsey is of course intrigued by the novelty of the case, and things become even more interesting when the pince-nez case intersects with the case of a missing financier being investigated by his friend Parker of Scotland Yard. As the two work together to solve the seemingly disparate crimes, aided by the invaluable assistance of the indefatigable Bunter, Wimsey's valet, it becomes clear that they're on the tail of a fiendishly clever killer whose methods are more gruesome and whose motive is more diabolical than they'd ever imagined.

I really love mystery series that feature strong, quirky, memorable protagonists (i.e., Poirot, Marple, Sherlock Holmes). For me, it's more about how the detective in question solves the case than the case itself - I want a detective that I enjoy spending time with, you know? Lord Peter Wimsey fits these requirements perfectly. He's cultured, witty, devilishly smart, and possesses a sarcastic sense of humor that's absolutely to die for. He rather reminds me of Sir Percy Blakeney (a.k.a. the Scarlet Pimpernel), whose foppish manners masked his intelligence, with a little of P.G. Wodehouse's Jeeves and Wooster (Bunter is a close cousin to the long-suffering Jeeves, but Wimsey is light-years ahead of Wooster in the brains department). Wimsey's the reason I love reading Sayers, and as the series progresses so does the strength of the mysteries he encounters.

This isn't an example of Sayers's most polished Wimsey novel. There is more than one occasion where the narrative meanders or loses focus. Tone-wise the novel also veers between witty comedy and the fairly gruesome manner it is discovered that the crimes in question were carried out. That said it's still a highly enjoyable introduction to Lord Peter's quirks and deductive brilliance. I absolutely love Sayers's ability to turn a memorable phrase - she was absolutely brilliant at penning funny and sarcastic dialogue. Everything comes fast and furious with Wimsey, and Sayers, being a master wordsmith, uses her ability to full advantage to establish Wimsey's character through sparkling, funny, incisive dialogue. Lord Peter Wimsey is a fascinating mass of contradictions and brilliance, and I look forward to my next stop through the novels chronicling his investigations!
Posted by Unknown at 4:07 PM

Hi, Ruth -- I've had Sayer's "Gaudy Night" on my TBR list forever. Have you read that one? Nice review.

@Joanne - Thanks! Haven't read Gaudy Night yet...I actually read Whose Body? a couple of years ago, before I started reviewing...so I'm starting over with the series.

Oooooo sounds good. I looove mysteries! Did you see the mystery I mentioned recently on my blog? :)

@Juju - Sayers mysteries are a delight! I love her facility with language. And yes, I did see the mystery you mentioned on your blog - hope you're going to review it!

I've been meaning to read this series for a looooong time. Eventually I'll get to it. Hopefully.

@heidenkind - There's seriously too much out there to read. Big time problem. *sigh* :P