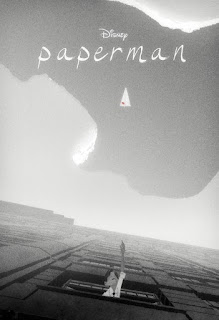 Apparently not going to see Wreck-It Ralph in theaters was a mistake, even though it didn't interest me in the slightest, because it was preceded by this absolute GEM of a short film entitled Paperman. Synopsis via the film's Facebook page:


Introducing a groundbreaking technique that seamlessly merges computer-generated and hand-drawn animation techniques, first-time director John Kahrs takes the art of animation in a bold new direction with “Paperman.” Using a minimalist black-and-white style, the short follows the story of a lonely young man in mid-century New York City, whose destiny takes an unexpected turn after a chance meeting with a beautiful woman on his morning commute. Convinced the girl of his dreams is gone forever, he gets a second chance when he spots her in a skyscraper window across the avenue from his office. With only his heart, imagination and a stack of papers to get her attention, his efforts are no match for what the fates have in store for him. Created by a small, innovative team working at Walt Disney Animation Studios, “Paperman” pushes the animation medium in an exciting new direction.

Best six and a half minutes of your day, guaranteed: 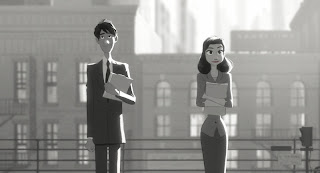 The die-hard, vintage loving romantic in me is SO HAPPY right now.
Posted by Unknown at 12:03 PM

Oh, I LOVED Wreck-It Ralph! It was one of my favorite new movies of 2012 - I saw it twice in theaters. :) The animation is awesome, and there's adventure, adorableness, so much creativity, and even some hilarious, sweet romance! I can't wait until it comes out on DVD!

And yes, it was preceded by this super sweet short film! :)

Oh my goodness it soooo sweet and lovely. Thank you for sharing this.

I soooo neeed to rent Wreck It Ralph.

lol That paper has a mind of its own. :)

Are you kidding me? Best thing EVER! :) Thanks for sharing.

@Amber S. - Oh cool, thanks for your recommendation. I will probably rent it for sure! :)

@Jennifer - This makes me SO HAPPY. Glad you loved it too!