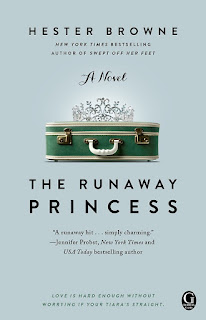 Amy Wilde may have a green thumb when it comes to plants, but when it comes to men she's all thumbs -- hopelessly frozen, bereft of a single intelligent thought or witticism. Her vivacious roommate Jo is determined to see Amy's perpetually single status changed for good at their next party -- a party that's gate-crashed by Rolf, a playboy with the godlike looks of an Adonis. But it isn't Rolf that captures Amy's eye -- it's his suspiciously normal (but equally handsome) friend Leo, with whom conversation -- wonder of wonders! -- comes as naturally as breathing. She may at long last have finally met her perfect match, the man with whom she can finally be herself, unencumbered by her family's past scandal. But when she learns that Leo the investment banker turns out to be Prince Leopold of Nirona, one of the ten most eligible bachelors in the world, the very private Amy suddenly finds herself thrust into the glare of a very public, and often cruel, spotlight. When tragedy strikes and Amy's closely-guarded past threatens to resurface, can her relationship with Leo survive the pressures of fame and duty?

While The Runaway Princess is my first Hester Browne novel, it most assuredly will not be my last. People, this book is ADORABLE. This is the perfect read for anyone who ever found their heart skip a beat as the real life fairy tale unfolded between William and Kate, proving once again the public's enduring fascination with a royal romance. I loved Amy's idiosyncrasies and unabashed determination to remain normal, pre- and post-spotlight. She's quirky, funny, and best of all, real. Leo is a swoon-worthy hero, the perfect modern day knight in shining armor -- an apt description since after all Browne has penned the modern-day equivalent of a fairy tale. Amy and Leo are surrounded by a colorful cast of supporting players, best of all Amy's best friend Jo, larger-than-life, generous and loyal to a fault -- so well-drawn she deserves her own book. Her friendship with Amy, the give-and-take between them, is perhaps one of the strongest female friendships I've read in fiction of this ilk.

If Amy's story is a grown-up version of The Princess Diaries, it isn't all frothy fun and laugh-out-loud humor (although the novel possesses those qualities in abundance). Amy's unfolding relationship with Leo, while on balance are the stuff dreams are made of, are occasionally shadowed by the real-life, and all too relatable, intrusion of self-esteem issues and family tragedy. While I did feel that the "secret" shame in Amy's past was concealed far too long and resolved too neatly, I appreciated that Browne was willing to add some depth and emotional pathos to her otherwise fluffy, charming romance. Amy and Leo's romance is a charming, thought-provoking entrée into the glamorous and pressure-filled world of royal romance and its attendant public notoriety. The challenges and sacrifices Amy must face in her quest to make her relationship with Leo work are powerful reminders of the humanity behind the public persona, hidden behind the gloss of celebrity status and 24-hour news cycles. And while it could be argued that, in the end, Amy doesn't give much -- or enough -- ground, what I loved her passionate commitment to remain true to herself when her very private affaire de coeur becomes very public fodder for the gossip columns.

The Runaway Princess is a charming modern-day fairy tale, packed with warmth, heart, and unexpected moments of poignancy. Amy is a fantastic "everywoman" heroine, and coupled with Browne's razor-sharp wit and gloriously realized cast of supporting characters, her resulting romance is one of the best, most charming chick lits I've read in an age. Well done, Ms. Browne -- I can't wait to explore your backlist titles!

If Amy Wilde’s new boyfriend, Leo, treats her like a queen, that’s because he’s secretly a prince himself: Leopold William Victor Wolfsburg of Nirona, the ninth most eligible royal bachelor in the world. Amy soon discovers that dating an heir to a throne has many charms—intimate alfresco dinners, glittering galas, and, for a girl who lives in jeans and wellies, a dazzling new wardrobe with tiaras to match. But there are also drawbacks: imagine the anxiety of meeting your boyfriend’s parents multiplied by a factor of “riding in a private jet,” “staying in a castle,” and “discussing the line of succession over lunch.” Not to mention the sudden press interest in your very un-royal family. When an unexpected turn of events pushes Leo closer to the throne, the Wolfsburgs decide to step up Amy’s transformation from down-to-earth gardener to perfectly polished princess-in-waiting. Amy would do anything for Leo, but is finding her Prince Charming worth the price of losing herself?
Posted by Unknown at 2:00 PM

Oooh, goodness! Ruth, this sounds adorable! Love anything that has such a swoon-worthy romantic component as this sounds like(great review BTW!). Putting this on my Amazon list for next time. :)

I really enjoyed this book (and your review)-I adore stories about Will and Kate and this totally satisfied that part of my heart.

@Rissi - I really enjoyed this book and have GOT to find time to read more by Browne! :)