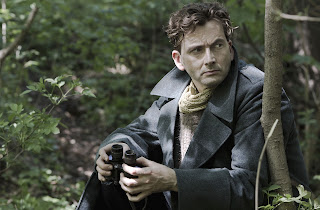 I am SO excited about this: David Tennant's new World War II-era miniseries, Spies of Warsaw, has finally been given an air date! It will premiere on BBC America over two consecutive Wednesdays, beginning April 3rd and concluding April 10th. Here's a bit about the miniseries:


Set in London, Paris, and Poland during World War II, the spy drama stars Tennant as French diplomat/aristocrat Colonel Jean-Francois Mercier, a war hero who is drawn into “a world of abduction, betrayal and intrigue in the diplomatic salons and back alleys of Warsaw.” He falls for a a Parisian lawyer for the League of Nations (played by Janet Montgomery), and their affair heats up as Germans roll into the Black Forest.

And here's the BBC4 trailer, as the 15-second spot BBC America has in their press release is, well, only fifteen flipping seconds. *wink*

Ahhh... I am so glad I saw this post! Going to add it to my calendar right now :)

Gosh, I am SOOOOOOOO excited!!!! Squeeee!!!!! I've been following this drama for a while and I'm so happy it's airing here! David has a rather James Bond vibe in this. Specially the promo pics of him in a tux. Mmmmmmm! ;)

Never heard of this prior to your post, but it looks wonderful. I love WWII-era stories, and as a BBC production, this ought to be terrific.

Thanks for the heads-up!

TWO WEEKS FROM TODAY, people! I cannot WAIT for this premiere!