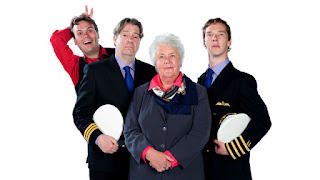 Cabin Pressure fans rejoice! The first episode of the BBC radio comedy's fourth series is available to listen to online via the BBC Radio 4 Player for the next six days, absolutely free! No word yet as to when the series will be available for purchase -- I assume sometime after the entire fourth run airs, the sooner the better as far as I'm concerned. :)

If you're not familiar with Cabin Pressure, here's a short blurb about the program -- each and every episode is absolutely HILARIOUS (and conveniently available for purchase through iTunes...just sayin'!). *wink*


Cabin Pressure is a sitcom about the wing and a prayer world of a tiny, one plane, charter airline; staffed by two pilots: one on his way down, and one who was never up to start with. Whether they're flying squaddies to Hamburg, metal sheets to Mozambique, or an oil exec's cat to Abu Dhabi, no job is too small, but many, many jobs are too difficult...