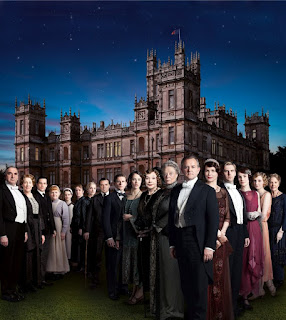 I can hardly believe it, but tomorrow the long-awaited US premiere of Downton Abbey's third season begins on Masterpiece Classic! Just a quick recap of Downton on the blog to help you prepare, if you're interested:

And here are links to my season one and two posts:

I'm trying to control myself. I saw Episode one and I'm still like a kid on Christmas Eve.

So excited! :) I've been rewatching through the first two seasons...last night I finished disc 2 of season 2, so about three more episodes to go!

YES! So excited this is finally here for you, Ruth! It means we can finally chat about the ups and downs of series three of this "guilty pleasure" soap opera. ;D

Looking forward to your thoughts, girl!

Hope you guys enjoy it! Having seen it, it is a VERY up and down season ;-)

Hey Ruth, got a question for you--I'm doing a Goodreads Reading Challenge this year, but the button on my sidebar won't update. I know you have done this in the past, so maybe you could help me figure this out as to why it won't ;-)

@Kristin - Me too! Unfortunately I never got around to re-watching everything, though...so go you!! :)

@Ella - So I've gathered from a handful of spoilers! :)

I have had trouble w/ my GoodReads update button in the past. Usually going to GoodReads and grabbing the code (again) and dropping it in the sidebar box does the trick. Let me know if that doesn't work. I am not kidding, I think I had to do it four times last year and then all of a sudden it ran like clockwork. *knock on wood*