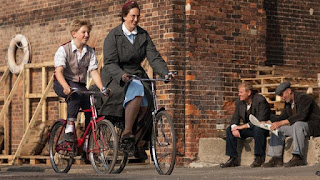 Call the Midwife continued on PBS last night, and I absolutely loved it. I thought the first episode was wonderfully done and thought-provoking, but this installment nearly did me in -- these characters and this world are absolutely captivating. Here's the episode summary from the BBC website:


As the nuns and nurses go about their duties, Nonnatus House gains a new resident, Chummy, a welcome pair of hands to help with the busy caseload. Sister Evangelina, in a case of inverted snobbery, has little patience with her or with her passionate and somewhat lofty desire to become a missionary.

Meanwhile, Jenny has a chance late-night encounter with Mary, a young Irish girl aged 15. She is heavily pregnant and reveals that she ran away from an abusive home life in rural Ireland and made her way to London. She is unwilling to give away many details of her current situation. Mary is desperate and terrified, and eventually Jenny discovers the full, horrific details of the young girl's plight.

Destitute upon arrival in London, Mary was "taken in" by Zakir, the owner of an all-night cafe in the notorious Cable Street area. It transpired that the cafe was in fact a brothel, and Mary was forced into prostitution almost immediately. Her suffering has been extreme, but in the tough world of the criminal East End, this is far from unusual.

Sister Julienne arranges for Mary to be helped by a religious charity, but sadly it is not to be the end of her tragic story.

Chummy makes great efforts to settle in, but nerves and a keenness to please almost overwhelm her, and she makes slow progress. A particular obstacle is her inability to ride a bike, and although Jenny, Trixie and Cynthia struggle to teach her, their efforts are hampered by catcalling and jeering from local children. Her initial attempts to learn end in a spectacular collision between the three midwives and a policeman, PC Noakes.

Chummy's future at Nonnatus House hangs in the balance, and she soon finds herself out of her depth.

There are two main storylines to this episode -- one following Jenny (Jessica Raine) as she continues to settle into her work and adapt to the conditions and people she encounters in the East End, and the second introducing a new midwife, Camilla Cholomondley-Browne (Miranda Hart), whose acceptance at Nonnatus House is hampered by her painful shyness and wealthy upbringing.

As the episode opens we're introduced to Mary (Amy McAllister), a young Irish girl who works as a prostitute at an East End cafe run by Zakir (Darwin Shaw) as a front for the brothel. When a fellow prostitute discovers Mary's secret -- that she's pregnant and beginning to show -- the girl is terrified that she'll be forced to "get rid" of her child. Gathering her courage, she takes a five pound note from Zakir and takes to the streets, where she meets Jenny and begs for her help. Over a meal Mary gradually metes out the details of her story, and how she came to be in the East End, to an increasingly horrified Jenny who determines to help the girl.

Mary's story BROKE MY HEART. I had no idea until the end of the episode exactly how old she was, but McAllister brought a fragility to her performance that made me positively bleed for Mary and how she'd been taken advantage of by men, time and time again, when all she hoped for was a better life. But I think what killed me most was how Mary seemed so...resigned? to her experiences, in denial about the fact that the man she loved, the man who promised her the finer things in life, who claimed to care abut her well-being viewed her as nothing more than a commodity.

I thought the scenes between Jenny, Mary, and Father Joe (Stanley Townsend), a priest who runs a home for women in Mary's situation, were particularly well-done. Townsend does a terrific job playing a dedicated man of faith determined to fight for the welfare of the women who seek his protection. If Townsend seems vaguely familiar, he recently appeared on Masterpiece Mystery in Zen, playing the role of Muscati. But as Jenny discovers, even seeking hep from someone as well-intentioned as Father Joe isn't without unexpected and heart-breaking consequences. Shortly following the birth of Mary's child, a daughter she christens Kathleen, Jenny receives a hysterical summons and is horrified to discover that the home had taken Mary's child and put it up for adoption without her consent. When Jenny rages at Father Joe about the injustice of it all, he informs her it's because Mary herself is only fifteen (now, my take on the situation was that Jenny didn't realize Mary was quite that young, and is shocked), and as a child herself, with no family as advocates, has no say. This broke my heart, because when looked at as dispassionately as possible, one can see the reasoning behind the home's decision -- but when one takes into account what that child meant to Mary, I was left with the impression that losing her baby has most likely stripped Mary of hope. And barring a miracle, someone else may find her in similarly desperate straits all too soon.

The balance of this episode introduces the new midwife to Nonnatus House, Camilla Cholomondley-Browne, who insists that everyone call her Chummy. I LOVED this character. Not only is she extraordinarily friendly and good-natured, but she's tall (according to the IMDB, Hart is 6'1" -- I'm 6'2", so I felt like I could relate to Chummy in no small respect there!). Chummy is tall, not a stick figure, and painfully shy -- but if you get beyond the initial awkwardness, this character is a jewel. I thought it was fascinating to see the "reverse-snobbery" she encounters, particularly from Sister Evangelina (Pam Ferris). Chummy, unexpectedly, hails from a wealthy family, and despite her desire to please Evangelina remains convinced that someone of Chummy's class (the moment she drops that she's met Princess Margaret is priceless!) can never hope to relate or help the people of the East End.

Chummy's arrival brought some much-needed humor to the episode, a brief reprieve, if you will, from the life-and-death intensity of troubled births or abused girls. Her inability to ride a bicycle, while making her the butt of childrens' jokes, is a great excuse to see the midwives bond as Cynthia (Bryony Hannah) and Trixie (Helen George) try to teach her this necessary skill -- since covering eight miles effectively on foot is next to impossible. Their spectacular crash into Police Constable Noakes (Ben Caplan) was hilarious, since everyone expects Chummy to get some sort of citation -- a citation that is never forthcoming since all Chummy and Noakes could do following the collision was make googly eyes at each other, entangled on the cobblestones. That little flirtation made me SO HAPPY. :)

Chummy's first medical cases were not only an excellent showcase for how critical the midwives' work is to the East End, but the perfect opportunities for this fabulous character to show her mettle and her heart. During her first stint at the clinic visits, where the midwives assist doctors in patient examinations, Chummy meets Mrs. Fraser (Amelda Brown), a woman who looks to be in her forties, recently remarried, and expecting a child. Mrs. Fraser's pregnancy is her fourth (or fifth?), and the woman is terrified of losing this latest child, since it's revealed she wears braces on her legs from a childhood bout with rickets, which left her unable to deliver naturally. I nearly wept at the kindness Chummy showed toward the frightened woman, old enough to possibly be her mother, a bedside manner that earns her the approbation of Dr. Turner (Stephen McGann -- the youngest McGann brother!). The latter is much needed as Chummy's clumsiness kicks in shortly following her exchange with Mrs. Fraser, creating all sorts of havoc at the clinic. :P

But Chummy's final case is perhaps my favorite. Betty Smith (Victoria Alcock), a friend of Mrs. Fraser, is likewise expecting a child late in life thanks to her remarriage. In fact, she goes into birth at her daughter's wedding, and Chummy is called to the apartment only to encounter enthusiastic party-goers doing the conga and all sorts of craziness that one most definitely does not associate with the scene of an impending birth! It turns out to be a breech birth, and Chummy successfully coaches the mother through the difficult process, earning her the respect of Sister Evangelina. I could've cheered! I loved the touch that Mrs. Smith's son, Jack (Jake Bailey), had been one of the local children who teased Chummy's poor bike riding skills most. But after sitting through the tense moments awaiting news of the child with his step-father (Nick Bartlett) -- a really wonderful father/son bonding moment -- Chummy earns Jack's respect, and the older Jenny's voice-over (Vanessa Redgrave) at the end of the episode reveals that he became one of her staunchest allies.

While I love Jenny and Chummy, going forward I do hope that we see episodes showcasing Cynthia and Trixie at work. Also, while Sister Julienne (Jenny Agutter) and Sister Bernadette (Laura Main) made welcome appearances, I'd love more insight into their characters in the coming weeks. Evangelina and Monica Jean (Judy Parfitt) have already proven to be colorful, and particularly in the latter's case, humorous supporting characters.

This show is such a delight, a wonderful surprise, a gem that I'm thrilled has finally made its way to US television screens. An unexpected blend of humor and heartbreak, this is a program that relishes in life lived to the fullest. Not to be missed!
Posted by Unknown at 3:30 PM

To say I am thrilled to know you are liking these Ruth would be an understatement. :-)

"This show is such a delight, a wonderful surprise, a gem that I'm thrilled has finally made its way to US television screens. An unexpected blend of humor and heartbreak, this is a program that relishes in life lived to the fullest. Not to be missed!"

Reading that makes me ridiculously happy - this was one of those shows like 'Lark Rise' that took FOREVER to get here. But... it's here now. YAY!

@Rissi - Girl, this episode surpassed the premiere - I just love it! And like you, I'm thankful that this show is making its way to the US in a relatively timely fashion. Lark Rise never even aired in my PBS market...

Aiee, I didn't get a chance to see it with my birthday celebrations! ):

@Tasha - Well that's a good excuse I suppose...ha! Seriously I hope you get the chance to watch it before episode #3, as it was excellent!

I've added this show on my "Must buy" list! I like shows based on true events and people but I don't normally love them but this series I do LOVE! From the looks of the next episode it seems that there's going to be more going on in Jenny's & Chummy's personal lives which I'm really looking forward to. Episode 2 broke my heart with Mary's story and I'll just bet that there is going to be even more heartbreak. :-( I hope we get more than one season in the States!

@Renee - This show is INTENSE, isn't it? I love that though. :) It kind of exhausts me, though, by the time Masterpiece comes on afterward. :P I'm thinking it is pretty much a given that PBS will air subsequent seasons...at least I certainly hope so! These characters are wonderful.

Just finished watching this episode. I LOVE, LOVE, LOVE Chummy! Oh, my! I was bawling when she delivered the baby! And yes, Jenny's story with Mary was heartbreaking in so many ways. I can't believe how much I love these characters!