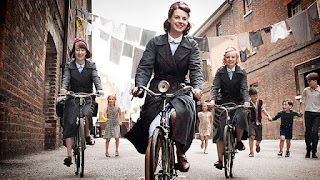 Sunday night saw the long-awaited premiere of the unexpected British hit Call the Midwife begin on PBS. I opted to watch the initial broadcast of the premiere and it was excellent-- unexpectedly gritty and powerfully done, a snapshot of a world and a life that, like midwife Jenny Lee, I found by turns shocking and incredibly moving. Here is the episode summary from the BBC website:


This opening episode sees newly qualified midwife Jenny Lee arriving at Nonnatus House. Believing she has been sent to a small private hospital, Jenny is initially surprised to find herself at a convent. Via Jenny, we are introduced to the series world and its regular characters - the Sisters (Julienne, Evangelina, Bernadette and Monica Joan), her nursing colleagues Trixie and Cynthia, and the jovial handyman Fred. Initially daunted by her surroundings, which are so different to anything she has witnessed previously, Jenny gradually begins to find her feet.

The story of the week focuses on the first case Jenny is allowed to handle alone - the care of Mrs Conchita Warren, during her 25th pregnancy. Conchita is married to Len Warren, an East End painter and decorator who fought in the Spanish Civil War. He brought Conchita home with him after hostilities ceased - a living, breathing and very beautiful souvenir.

Conchita speaks no English, as according to Len there has never been any need, and spends her days caring for her enormous family. Her case appears to be routine, but when freezing smog descends on London events take a turn for the worse. Conchita slips, falls and goes into labour at 30 weeks gestation - suffering from severe concussion. Jenny, alone in the house with Conchita and her husband, must draw on all her reserves of skill and courage if Conchita and her premature child are to survive.

This episode also features Pearl, whose indomitable spirit rises above a dose of venereal disease; and Muriel, whose home delivery shows us the best and worst that the system has to offer.

I suspect Call the Midwife will prove to be a star-making vehicle for actress Jessica Raine, who plays the newly-minted midwife Jenny Lee. Raine only has a handful of acting credits to her name to date (among them appearances in The Woman in Black and 2010's Robin Hood). She manages to bring the perfect mix of vulnerability, naivete, and strength to the role of Jenny, whose advent at Nonnatus House isn't anything like she expected. The patients and conditions she encounters in the East End are wholly outside the realm of her experience -- a bit coarse, living in at times shockingly filthy conditions, carrying on lives the like of which Jenny never dreamed.

Nonnatus House is run by a quartet of Anglican Sisters who are as colorful and vibrant in their own way as the patients they seek to help. Sister Julienne (Jenny Agutter) is the sister-in-charge of Nonnantus House, whose calm demeanor and deeply-held faith stand her in good stead, whether mediating disputes among her fellow nuns or coping with the idiosyncrasies of her patients. Agutter should be a familiar face to fans of British drama, having appeared in the likes of The Buccaneers, MI-5, Miss Marple and Poirot, and even a brief apperance in The Avengers as a member of the World Security Council. Sister Evangelina (Pam Ferris) hails from the same stock as the Nonnatus House patients and appears to possess an unfailingly tough, no-nonsense approach to both life and work. Ferris is perhaps most instantly recognizable as Aunt Marge from the Harry Potter series or Grace Poole from the much-loved 2006 version of Jane Eyre.

Sister Monica Jean (Judy Parfitt) is the first house resident Jenny meets when she reports for duty at her new job. Monica Jean is a character. Hailing from an aristocratic background, she was one of the first women in Britain to qualify as a midwife, a thoroughly radical act in her youth. Now retired and extremely eccentric, if not suffering from a mild form of dementia, she still lives at Nonnatus House and is cared for by her fellow sisters. Parfitt is another familiar face, having played Mrs. Clennam in Little Dorrit. The final sister is Bernadette, the youngest, played by Laura Main. I'm unfamiliar with Main's previous work, but I took an instant liking to her portrayal of Bernadette and look forward to seeing her character develop on this show. As the nun closest in age to the "secular" midwives, she seems poised to serve as a sort of liason between  the younger midwives and the more traditional nuns.

At this juncture Jenny has two fellow midwives, both in their twenties, who are positioned to help Jenny adapt to the rigors and challenges of their work in the East End. Cynthia Miller is played by Bryony Hannah and Trixie Franklin is played by Helen George, both relatively new actresses. This episode didn't afford me much of an opportunity to get a good "read" on Cynthia's character, but I loved Trixie's -- she seems outgoing and irrepressibly fun, and I loved her unexpected verve and fashion sense in the midst of Nonnantus House's somewhat unlikely locale.

Jenny's first cases test her resolve and commitment to her career choice as a midwife, but prove to be soul-expanding experiences that open her eyes to the resilient spirit of the people she's tasked with helping, the idea of her work as a ministry and the precious gift of life. Her first "case" involves Conchita Warren (Carolina Valdes), a child bride her husband Len (Tim Faraday) brought from Spain following the Spanish Civil War. She speaks NO English (and he speaks no Spanish!), and is poised to bring her 25th child in the world (there are apparently one or two sets of twins in there). Like Jenny, at first blush is easy to focus on the Warrens' unusual marriage, to say the least, and their cramped, dirty apartment. But what this show does so brilliantly through Jenny's interactions with the Warrens is remind you that their lives, their choices -- that is only part of who they are (does that make sense?). Though Jenny found their lifestyle shocking, what ultimately shines through is the love this family possesses for each other. I don't want to spoil Conchita's story further, as it is worth watching unfold on-screen -- this is unexpectedly intense drama, and a wonderfully poignant realization of the indomitable power of a mother's love for her children.

Jenny is also involved in the case of two other pregnancies -- Muriel's (Sarah Ridgeway) fourth (I think?) home birth, and Pearl's (Lorraine Stanley) latest pregnancy, at-risk since she's contracted venereal disease. Muriel's scenes were fascinating (though some viewers may need a bit of a strong stomach), taking viewers through the process of an at-home birth during this time period. But I loved Pearl's story, which broke my heart just when I least expected it to do so. Jenny is initially put off by Pearl's rather crude manners, odor, and seeming complete disregard for the health of herself or her children. But as Sister Julienne gently reminds Jenny, women like Pearl are not used to being cared for, so how can they realize they have value, care about themselves? When Pearl loses her baby and Jenny visits her apartment for a follow-up appointment, the unexpected connection the two form brought tears to my eyes.

Going into this program, based on the previews I expected something along the lines of a lighter, heart-warming drama, but this show delivered so much more than that. And really, given its subject matter I shouldn't be have been surprised. As Vanessa Redgrave states in her voiceover introduction (for the older Jenny) that opens the episode, her experiences at Nonnatus House were all about life and love in its rawest, most essential form -- at the beginning.

This series is based on midwife Jennifer Worth's memoirs of her experiences working in London's East End in the 1950s. Scripted by Heidi Thomas (of Upstairs Downstairs and Cranford fame), this promises to be a heart-wrenching, thought-provoking drama. Just contemplating women's health care today versus fifty years ago blew my mind! While Call the Midwife is, perhaps, not a drama for the faint of heart, it will, I suspect, prove to be an extraordinarily rewarding journey. Jenny entered this profession to make a difference -- and I'm looking forward to seeing just how much she's changed by the colorful, resilient people she encounters. Did you watch the premiere? If so, please share your thoughts!
Posted by Unknown at 3:09 PM

I skimmed most of this post since we recorded it but haven't watched yet. I'm glad to know it's one to look forward to!

@Anne - Oh Anne, I think you'll enjoy this show! Please let me know what you think when you get a chance!

I watched the premiere and really loved it.

I was touched by the story lines and loved how each unborn and born child were treated as precious and worthy, even if they were the 25th child!

It was also great to see how midwives worked in the 50's and I loved the attitude they had towards mothers...that they are the unsung heroes. (I cried at that part.) :) So beautiful.

I honestly didn't know what to expect from this show, but was pleasantly surprised. I'm usually pretty dang squeamish when it comes to anything health-related, but I still enjoyed the show a lot. I'm interested in this guys Jenny is in love but can never have!

So glad you liked this one, Ruth. I have it on pre-order: we'll have to compare notes come the DVD release. :-)

We FINALLY got a chance to watch this, Ruth. I didn't expect to be so completely captivated by the characters and stories! Hubby was a bit squeamish at times, but we will definitely be watching the rest of the episodes.

@Cathy - So glad you enjoyed it! I completely agree with you -- I love how this show treasured LIFE.

@Rissi - Looking forward to hearing your thoughts on this show!

@Anne - So happy you and your husband enjoyed this show! (I confess, I was a bit squeamish at times through the first episode too -- so glad I stuck with it!)