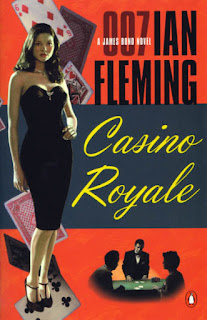 "'A dry martini,' Bond said. 'In a deep champagne goblet. Three measures of Gordons, one of Vodka, half a measure of Kina Lillet. Shake it very well until it's ice cold, then add a thin slice of lemon peel. Got it?'

Introducing James Bond...charming, sophisticated, handsome, chillingly ruthless, and licensed to kill. this, the first of Ian Fleming's agent 007 novels, finds Bond on a mission to neutralize a lethal, high-rolling Russian operative called simply "le Chiffre" by ruining him at the Baccarat table and forcing his Soviet spymasters to "retire" him. It seems that lady luck is taken with 007 -- le Chiffre has hit a losing streak. But some people just refuse to play by the rules while Bond's attraction to a beautiful female agent leads him to disaster and an unexpected savior.

When the British Secret Service receives intelligence that Le Chiffre, the banker for a notorious Russian trade union, is on the verge of bankruptcy thanks to poor investments in now-illegal French brothels, an audacious plan is hatched. They will send the service's best card player to the casino at Royale-Les-Eaux to ruin Le Chiffre at a high-stakes Baccarat game. The best gambler in the service is James Bond, Agent 007, renowned for his gaming skills and his cold, brutal, effectiveness in the field. Arriving at Royale with the cover identity of a wealthy, profligate Jamaican playboy, assisted by Rene Mathis, a colleague representing the French intelligence service, and Vesper Lynd, an enigmatic, dark-haired beauty who works for the Head of Section S, the arm of the British Secret Service that collects intelligence on Soviet operations. But Bond's cover is blown almost from the moment he steps on French soil, and his reconnaissance work building his stake, observing Le Chiffre, and infiltrating the Casino becomes a high-stakes cat-and-mouse game not only to destroy Le Chiffre's assets and value to his Soviet masters, but a battle to survive their gambling duel. Bond may be a ruthlessly effective, thorough agent, but even a man of his intellect and skill set can have an Achilles' heel. With victory all but secured, Le Chiffre strikes a devastating blow -- and a betrayal of the heart threatens to destroy the career of one of England's most legendary agents forever.

I have NO IDEA why I've never read a Bond novel prior to this, because Casino Royale is a superb slice of suspense-laden, page-turning fiction. I've been a long-time fan of the Bond films (in particular Connery, Dalton, and Brosnan's respective tenures as 007, with a dash of Moore's rakish charm) as escapist, entertaining action films. It wasn't until Daniel Craig debuted as Bond in 2006's Casino Royale that I saw the possibility of depth in the character. And so it is fitting to begin with the novel that launched the world's sixty-year obsession with Bond, the novel that inspired by favorite filmic Bond's debut. Because for better or worse, my -- and I would argue a large part of the movie-going public's -- impressions of Bond have been formed by the films, many of which color Bond as a ruthless, womanizing, soulless machine. So it was with great surprise and pleasure that within the pages of Fleming's debut I discovered a character fully-formed -- ruthless, yes, but articulate, intelligent, and capable of great feeling. In other words, a tortured hero -- and oh, do I have a weakness for those. *wink*

For a novel where much of the action occurs around a card table, the casino sequences were surprisingly intense. Fleming's background as a Naval Intelligence officer allows him to lend the set-up of the plot to ruin Le Chiffre credence, and his play-by-play descriptions of the epic duel over Baccarat reflect his familiarity with the high-stakes world Bond inhabits with such apparent ease. In an unexpected twist, the central focus of the novel -- the card game -- is resolved relatively early, opening the door to a second act that's unexpectedly gritty, tightly plotted, and steers Bond, and the novel, into a cerebral examination of the nature of evil and duelling ideologies (i.e. free world democracy vs. communism). Rather than limiting his novel by setting Bond in the center of ever-changing current political and ideological forces, Fleming uses Le Chiffre's torture and Vesper's subsequent betrayal to set Bond against the shadowy, omnipresent SMERSH organization, the evil behind the ideology.

Speaking of Vesper, I was pleasantly surprised by the genuine warmth and "romance" in Casino Royale. The Bond of the films has too-often earned the reputation of an inveterate womanizing misogynist. That's not to say that Fleming advocated sexual equality -- Bond is very much a product of his creator and his time, but capable of great depth of feeling and that trust, once given, can be reciprocated with equal scorn when betrayed. While my reading of the text was somewhat colored by the unforgettable impressions of Craig in the recent film, that aside the manner in which the Vesper/Bond relationship fractures absolutely broke my heart. Well played, Fleming, well played.

Clocking in at just over 200 pages, Casino Royale is a slim novel that packs a wealth of suspense within its pages. Fleming is an economical writer, and his prose is pleasingly crisp and direct, colored with the occasionally unexpected flourish of a gorgeously descriptive passage or metaphor. James Bond's first adventure is incredibly well-plotted, fast-paced, and compulsively readable. All the pieces of the puzzle -- Bond's habits and idiosyncrasies, his likes and dislikes -- that famous cocktail! -- M, Ms Moneypenny, the CIA liaison Felix Leiter -- have been introduced, and I for one look forward to discovering more of the origins of the most famous secret service agent of the twentieth-century.

Thanks to Lori for designing my lovely new blog button! :)
Posted by Unknown at 5:47 PM

I tried reading this book, but I just couldn't get into it. Too much female objectification going on for me.

There's some sort of James Bond reading challenge going on at Literary Housewife, and they watch the movies, too. You should check it out!

@Tasha - Okay, yeah, without a doubt that is present -- but I don't know, it wasn't there as much as I expected? Does that make sense? Vesper was a smaller part of the overall plot, until the final third anyway, so perhaps because I went into it expecting something really over-the-top this paled by comparison. :P

Thanks for the heads up -- I will definitely check that out!! :)