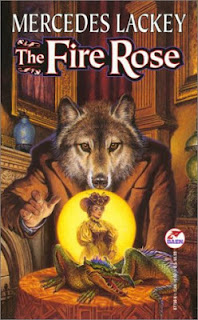 Rosalind Hawkins is a medieval scholar from a fine family in Chicago. Unfortunately, her professor father has speculated away the family money and died, leaving young Rosalind with no fortune and no future. Desolate with grief, forced to cut her education short, she agrees to go West to take a job as a governess to a wealthy man in San Francisco. A boom town in the 1850s, in 1905 San Francisco is the center of culture in the new West, and perhaps there she will rediscover a reason for living. But when she arrives at Jason Cameron's mansion on a hill overlooking the Pacific, she discovers that there are no children, not even a wife, in residence: just the gentleman himself and his enigmatic manservant. Penniless, Rosalind stays despite her misgivings. For the household is very odd indeed. Despite there being but one servant, the huge house is immaculate and food is prepared and served in the most elegant manner. Oddest of all is the master of the house: Rosalind never sees him, but communicates only through a speaking tube, and only at night. But then...she is happy. For her job in the household is to read to him: Latin, French, Greek, German - and she feels herself coming alive once more. As for Jason Cameron, through his contact with Rosalind, he, too, is renewed. An Adept and Alchemist, Master of the Element of Fire, he had attempted the old French werewolf transformation - and bungled it. Stuck in wolf form, over the years he had slowly been losing his humanity. Rosalind is bringing it back to him. But when a rival alchemist offers Rosalind the chance to restore her family's fortune in exchange for Jason's secret, who will she side with? And then the earthquake strikes....

One of the hottest writers in the fantasy genre, Mercedes Lackey boasts an audience that is impressively large and rapidly growing. This unusual new fantasy tells the story of a brave young woman caught in a clash between enemy sorcerers in San Francisco in the 1900s--on the eve of the San Francisco earthquake!

Rosalind Hawkins enjoyed a privileged life in turn-of-the-century Chicago as the daughter of a respected, well-to-do academic with the luxury and acumen to pursue advanced academic study. But shortly before his death her father gambled away the family fortune, leaving Rosalind penniless and unable to pursue her graduate work in medieval studies, her future a frightening and uncertain void. But hope arrives in the form of a most unusual query -- Jason Cameron, a wealthy railroad baron in San Francisco seeks governess well-versed in the classics to tutor his children. Grasping this thin hope of salvation, Rosalind heads west, only to discover that where Jason Cameron is concerned, nothing is as it seems. Cameron's immaculate home appears to employ only one servant -- the wily Paul du Mond -- and there are no children. Surrounded by riches beyond her wildest dreams, Rosalind is asked to agree to a most unorthodox arrangement -- reading ancient and obscure texts to Cameron every evening via a speaking tube. Though she's never set eyes on her employer, Rosalind grows to embrace the purpose and opportunities afforded to her by her new life. And Jason, an adept in "magick" and a Master of the Element of Fire, imprisoned in his home by an experiment gone awry, begin to cherish the hope for a future outside his study walls thanks to Rosalind's friendship. But Jason's enemies will do anything to prevent him from finding a cure, and in allying herself to the enigmatic Fire Master, Rosalind finds herself facing dangers that threaten to rob her of the life she's come to love and the future she's dared to hope for with Jason...

It's no secret that I adore fairy tales, and therefore I'm always on the lookout for new-to-me retellings that will put a fresh spin on a classic tale. Beauty and the Beast is one of my all-time favorites, and as such I was thrilled to stumble upon The Fire Rose, Lackey's take on the love story as old as time. In Lackey's alternate early twentieth-century history, "magick" is real, ruled by masters of the four elements -- earth, wind, air, and fire. Masters are individuals whose internal "balance" leans sharply toward one of the four elements, and when that preference is identified they are then apprenticed with an eye toward becoming adepts in their chosen field, able to communicate with the spirits of their element (salamanders for fire, sylphs for air, etc.) and exert control in their sphere of power. Lackey's world-building is one of the novel's greatest strengths -- she takes time (albeit perhaps occasionally tending towards pedanatry) exploring the mechanics of this alternate history, grounding her magic in plausible, elemental connections. In many ways it's workable -- and that sense of the everyday, that sense of credibility shades Rosalind and Jason's world with texture and possibility.

For me, the "Beauty" character is essential to the success of any Beauty and the Beast retelling -- she must not only be able to look beyond the "Beast's" beastly exterior, but preferably possesses an intelligence and poise that sets her apart from other fairy tale heroines of her ilk. I loved Rosalind's love of learning, her passion for education and the written word. Her struggle with finding her "place" in 1905 is handled with aplomb and sensitivity -- she may be an atypical, forward-thinking woman, but she is also very much a product of her time and as such grapples with the restrictions and opportunities afforded to her in an authentic manner. Jason is her perfect match, relishing the challenges provided by a woman who isn't afraid to exercise her intellectual prowess. He's quite proud, which is what gets him into trouble to begin with -- but it also makes it a bit hard to warm to his character. While I loved that Lackey crafts two extremely intelligent leads, I do wish she'd spent a bit less time world-building and a bit more time interjecting some romantic spark into Rosalind and Jason's relationship -- their story is, after all, inspired by arguably one of the most romantic fairy tales.

The Fire Rose is a thoroughly enjoyable introduction to Lackey's writing, and as a precursor to her British-set Elemental Magic novels, I definitely plan to investigate her magical take on the early twentieth-century further. Considering the source, this is a surprisingly realistic -- at times almost gritty -- retelling. Lackey doesn't shy away from acknowledging the seamier side of life facing unprotected women in 1905 San Francisco. And despite the development of magic in this alternate history, the elemental ties to the 1905 earthquake and its aftermath lends this novel more of a historical than a fantasy feel. It's a unique, refreshing take on fairy tale retellings, and if further novels interject greater romantic spark and character development, I'll be a very happy reader.
Posted by Unknown at 6:44 PM

Nice job on that review! I remember us talking about this one -- glad you got to read it! :-)

@Gina - Thanks Gina! I enjoyed this one...it was a fast, easy read. Not my favorite retelling, but I'm definitely intrigued enough to read more of her work. It's an interesting blend of realism and fantasy. :)

I didn't like the last (and only) Mercedes Lackey novel I read, but this sounds kind of awesome. I love books set in San Francisco, and Beauty & the Beast retellings. I might give it a try.

@Tasha B. - Which of Lackey's novels have you read? Just curious if it happened to be another in the Elemental Masters series. I wouldn't call this one great, but I enjoyed it, in large part because it was so very different from my experience in this genre.

I've never heard of this book before (or the author either, for that matter). But it actually sounds really interesting, in an unusual way. And I do love Beauty and the Beast retellings...I might have to give this one a try. :) Thanks for the review!

@Kristin - You're welcome! I'd love to hear your thoughts if you give this book a try! :)