Review: Paris To Die For by Maxine Kenneth 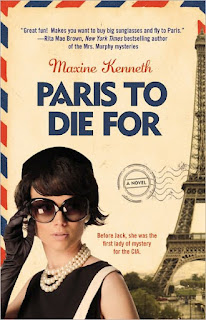 Inspired by an actual letter in the John F. Kennedy Library written by Jackie and revealing her job offer from the newly formed CIA.

Young Jacqueline Bouvier's first CIA assignment was supposed to be simple: Meet with a high-ranking Russian while he's in Paris and help him defect. But when the Comrade ends up dead, and Jackie-in her black satin peep-toe stiletto heels-barely escapes his killer, it's time to get some assistance. Enter Jacques Rivage, a French photographer and freelance CIA agent who seems too brash and carefree to grapple with spies, though he's all too able to make Jackie's heart skip a beat.

Together the two infiltrate 1951 high society in the City of Lights, rubbing shoulders with the likes of the Duchess of Windsor, Audrey Hepburn, and Evelyn Waugh. Jackie, no longer a pampered debutante, draws on her quick intelligence, equestrian skills, and even her Chanel No. 5 atomizer as a weapon to stay alive in the shadowy world of international intrigue-and to keep her date with a certain up-and-coming, young Congressman from Massachusetts . . .

Jackie Kennedy is a legendary icon of style, fashion, and class. But what if a young Jacqueline Lee Bouvier had been able to leverage her natural grace, poise, and societal connections into the life of a secret agent? That possibility may not be as far-fetched is it might seem at first blush, as Maxine Kenneth (the writing team of Maxine Schnall and Ken Salikof) takes an actual letter from the JFK Library, wherein Jackie reveals she received an offer of employment from the newly-formed CIA, and imagines what might have happened if she'd said yes. Blending actual history with the intriguing supposition of Jackie working as a spy, Paris To Die For is the story of her first mission -- facilitating the straightforward defection of a high-level Russian asset. But when the mission goes sideways, the inexperienced Jackie finds herself alone in Paris, unsure whom to trust, caught in a quickly-closing web of danger and intrigue.

The concept behind Paris To Die For is a fascinating one, replete with dramatic and nostalgic possibilities (this concept is tailor-made for fans of the short-lived television series Pan Am). The authors do a serviceable job of presenting the youthful Jackie as a woman longing to make her mark on the world, dreaming of more than life as "just" a society wife, longing to explore the increasing options available to women in a post-war world. The novel touches on Jackie's short engagement to John Husted, the complicated family dynamics attendant with her parents' divorce and mother's subsequent remarriage, and her idolization of her notorious father, "Black Jack" Bouvier -- suggesting the latter may be responsible for some of her maverick tendencies, carefully hidden beneath the veneer of social respectability. The Jackie presented here is a younger version of the woman immortalized as the First Lady of the Camelot White House -- passionate about art, literature, and film, unafraid to explore her creative side and in so doing become a style icon.

Placing such an iconic figure in the romance of 1950s Paris, with a dash of early Cold War political tensions, should be a foolproof recipe for success. Sadly this novel falls short on that front. While all the puzzle pieces are present necessary to create a frothy, engaging slice of alternate history -- a glamorous heroine, a glittering, romantic backdrop, high stakes games of espionage -- the end result falls flat rather than fizzling like the bubbles in champagne. The narrative falls all too often into the "showing versus telling" trap, opting to tell. us. EVERYTHING. rather than let events unfold in an organic -- and therefore more engaging -- manner. The narrative is regularly bogged down by information dumps, pages of recaps at the height of life-or-death moments, paragraphs of description instead of dialogue or action sequences propelling the plot forward. And perhaps most grating of all is the authors' tendency to name-drop. I get the temptation of having a pre-Kennedy Jackie meet famous individuals in her youth, like Audrey Hepburn or the Duke and Duchess of Windsor. One or two anecdotes can enliven the narrative, but after the fourth or fifth occurrence -- followed by the reveal that (SPOILER) a pre-James Bond Ian Fleming is involved -- by that point the any charm in the encounters has become ridiculous and contrived.

While Paris To Die For possesses a charming concept, its execution in the Schnall/Salikof debut leaves much to be desired with its plodding prose and over-reliance on forcing famous names into the narrative. There's promise in this concept, though, and since I have the sequel -- Spy in a Little Black Dress -- waiting on my Kindle thanks to NetGalley, I'll give this series a second chance. The promise of Jackie dating JFK at the behest of the CIA is fairly irresistible... :)
Posted by Unknown at 5:42 PM

Aw, that's disappointing. Did you see the novel about Jack Kennedy being a spy during WWII? I think it's called Jack 1939 or something like that.