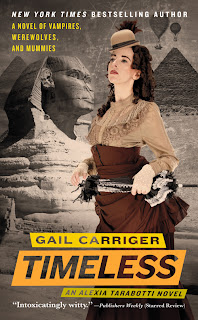 Alexia Tarabotti, Lady Maccon, has settled into domestic bliss. Of course, being Alexia, such bliss involves integrating werewolves into London High society, living in a vampire's second best closet, and coping with a precocious toddler who is prone to turning supernatural willy-nilly. Even Ivy Tunstell's acting troupe's latest play, disastrous to say the least, cannot put a dampener on Alexia's enjoyment of her new London lifestyle.

Until, that is, she receives a summons from Alexandria that cannot be ignored. With husband, child and Tunstells in tow, Alexia boards a steamer to cross the Mediterranean. But Egypt may hold more mysteries than even the indomitable Lady Maccon can handle. What does the vampire Queen of the Alexandria Hive really want from her? Why is the God-Breaker Plague suddenly expanding? And how has Ivy Tunstell suddenly become the most popular actress in all the British Empire?

Two years have passed since Alexia gave birth to her daughter, Prudence, and she and her husband Conall and their pack relocated to London. The Maccons have enjoyed the relative peace that came with allowing their metanatural daughter to be adopted by Lord Akeldama, the vampire potentate, a compromise that put a stop to the supernatural set's near-constant attempts to assassinate the soulless Alexia and her offspring. Prudence keeps her blended family of vampires and werewolves on their toes, since as a metanatural she can "absorb" either supernatural species' unique abilities and characteristics as will, making the object of her touch immortal -- unless neutralized by her mother's preternatural touch. But this relatively peaceful epoch in Alexia's life is interrupted by an unexpected summons from Matakara, the oldest living vampire and Queen of the Alexandria hive in Egypt. Matakara's invitation coincides with the murder of an old associate of Conall's, newly returned from Egypt and bearing the mark of the God-Breaker Plague. If there's one thing Alexia cannot resist, it is a mystery -- and so she and her family journey to Egypt, accompanied by Ivy and her acting troupe under the guise of an international tour. Once in Egypt Alexia begins to uncover secrets about her father's last days, secrets that someone will do anything to keep -- even if it means threatening Alexia's pack family. With the lives of her family and friends at stake, Alexia will need all her wits to avert a supernatural disaster that threatens to wipe her very way of life from the face of the earth...

Timeless is yet again a marked change of pace for Carriger's Parasol Protectorate series, with its two-year time jump and reliance on the arrival of Alexia and Conall's daughter as a potential supernatural game-changer. As such Timeless suffers from a few mis-steps in tone and pacing, but overall it serves as a solid conclusion to Alexia's adventures and paves the way for Carriger's sequel series starring Prudence, making its debut in 2013. As a long-time fan of Agatha Christie's Egyptian-set mysteries and Elizabeth Peters' Amelia Peabody, I love seeing Carriger relocate the bulk of the series' swan song to Egypt's exotic setting. It was fascinating to see Carriger's steampunk vision of the late nineteenth-century play out against a canvas strikingly different from London, with fashion, food, and cultural norms that Alexia relishes the chance to experience. And then there is the God-Breaker Plague, first introduced in Changeless, with its uncanny ability to neutralize supernaturals, leaving them mortal and vulnerable. The history of this "plague" is richly realized, and I loved how Carriger wove Matakara's unexpected history with Alexia's infamous father into the plague's history and dissemination. For a frothy series with an addictive sense of humor, here Carriger proves to be an impressive world-builder with a knack for giving every plot thread, every character some measure of resolution.

My favorite aspect of this novel was seeing the development of Alexia and Conall's relationship, well into their marriage. It is so rare in novels to see a couple weather the storms of life after making a life-long commitment to one another, so it is wholly refreshing to see Conall and Alexia spar and quarrel but always, no matter what stands at the root of their disagreement, remember just how much they love each other. And without giving too much away, Conall's plans for their future brought tears to my eyes, especially given the fact that he is immortal while Alexia, soulless, is most decidedly not. I have mixed feelings about Carriger's treatment of two of my other favorite characters, though -- the Woolsey Beta Professor Lyall and the dandy/spy extraordinaire Biffy. While I loved how Carriger used Biffy's character and gentle disposition to explore the idea that being an alpha is not all brawn and violence, the Biffy/Lyall romance very nearly veered into the realm of too much information for my tastes. That said, between Lyall's penance for past misdeeds and Biffy's rise in esteem in the Woolsey pack, Carriger is setting up an interesting werewolf dynamic for Prudence to work with when she revisits this world in future novels.

Timeless is an ambitious conclusion to this series, and while I appreciate its scope and Carriger's desire to bring Alexia's story full circle, at times it felt like there was just too much going on. After dropping clues for four books about Alexia's father and his questionable loyalties and penchant for scandal, his involvement in the spread of the God-Breaker Plague felt rushed, like a good idea left undeveloped -- and the ever-loyal Floote's involvement? That came completely out of left field. Also, I would've appreciated more time spent exploring Conall's burden for his family's future and his own fate as an Alpha (as if they live too long, they can go really bad). This is an ambitious conclusion to Alexia's story, and while it doesn't flow or unfold quite as well as I would've liked, I appreciate Carriger's commitment to her characters and desire to take a few risks with the format of her stories.

Those issues aside, Timeless still possesses all of the elements that make this series work so well -- laugh-out-loud humor, creativity, lightning-fast dialogue and pacing. The Parasol Protectorate is all frothy, candy-coated fun, laced through with unexpected moments of poignancy and solid character development. Carriger has proven a deft hand at creating and peopling a colorful world that results in an addictive, compulsively readable experience. I look forward to seeing where she takes readers next!
Posted by Unknown at 3:46 PM

These definitely intrigue me.

@Rissi - For more conservative readers, some of the content (especially in #1 and #5) could push the envelope...but overall I really enjoyed this series. A fun break from my normal reading! :)