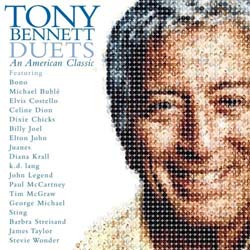 Next Tuesday (9/20/11) Tony Bennett is releasing Duets II, a follow-up project to his 2006 Duets album which I thoroughly enjoyed. With the new collaboration album about to debut, I figured it was the perfect time to post my review of Bennett's first Duets album here (originally written in October 2006) --

Just a couple of observations about this CD - first of all, Tony Bennett is in remarkably good voice for 80. Just my opinion, but I think he's taken much better care of his voice as he's aged than Sinatra did. All of the arrangements are terrific (especially the swing numbers), and while I really like all of the guest vocalists, of course some of the duet partners stand up better than others. The Dixie Chicks add a fun "girl group" sound to "Lullaby of Broadway" (reminded me of their work on The Runaway Bride soundtrack) and "Rags to Riches" is the absolute perfect song for Tony to sing with Elton John (there's a nice swagger to their vocals that nicely complements the lyric). The best jazz tracks are Tony's duets with Diana Krall ("The Best Is Yet to Come"), Barbra Streisand ("Smile"), Michael Bublé ("Just In Time"), and k.d. lang ("Because of You" - which also features a trumpet solo by the one and only CHRIS BOTTI!! Loverly...). Surprisingly enough, one of the best tracks on the album is "Cold, Cold Heart" where Tony sings with Tim McGraw. I was amazed at how well they sounded together (and of course a Hank Williams song is an ideal vehicle for McGraw's voice). Celine Dion is in good voice but way overdoes the ending on "If I Ruled the World," completely drowning Tony out (and reminding me of some of Barbra's vocal blasts on her own duets album, i.e., the end of "All I Know of Love" with Josh Groban). A little more subtlety would have been nice (like Celine's reading of "Bewitched, Bothered, and Bewildered" on the Mona Lisa Smile soundtrack). I you get the CD from Target, they are selling a version with four bonus tracks - including a second duet with Michael Bublé (!!!) - "Stepping Out With My Baby," which has been one of my favorite songs since the first time I saw Easter Parade as a kid. Very fun listening. This CD serves a great testament to Tony Bennett's talent, legacy, staying power, and versatility -- good listening.

Any Tony Bennett fans out there? Here's hoping Duets II is as much fun as its predecessor. :)
Posted by Unknown at 9:50 AM

First - I love Tony Bennett! And I love this album! And I need the new one!

Okay, now that I've gotten that out the way...

Have you heard some of k.d. lang's other duets with Bennett? They always do such an amazing job together!

@Court - Yay for Tony Bennett fans! :) I will have to hunt up these other k.d. lang/Bennett duets, thanks for the tip!

I've never been into Tony Bennett, though I'm not really sure why. :) I did download the music video of his duet with Michael Buble, Don't Get Around Much Anymore, the other week when it was free on iTunes. And it's really good. I wonder if that song is going to be on the new CD?

@Kristin - Musically, I am a mid-level fan (like some of his stuff, but my fandom for TB is no where near Sinatra levels *wink*), but I love the guy from his interviews -- he seems so nice & genuine.

I think you would really like this Duets album (as well as the one releasing next week, most likely). The arrangements on the first Duets CD are just divine!