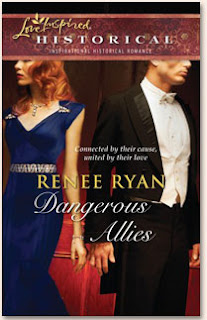 In Nazi Germany, British agent Jack Anderson risks his life working undercover as an SS officer. And his latest mission -- to uncover intelligence about a secret Nazi weapon -- is his most perilous yet. Especially since he'll have to work with Katarina Kerensky. The famous actress is too dangerous to trust -- and too beautiful to ignore.

Desperate to save her mother from the Gestapo, Katia reluctantly agrees to work with the coolly handsome Jack. But can she trust a man whose sense of honor is tangled in a web of lies? In a race against time, Jack and Katia forge an alliance to take down the enemy...and learn whether love can survive in a world gone wrong.

Deep in the Third Reich, Katia Kerensky plays a dangerous game. The dispossessed daughter of a murdered Russian prince, Katia came of age in her mother's German homeland, becoming a popular stage actress. But the princess's most radical role is wrapped up in her deepest secret -- with a Jewish maternal grandparent, Katia works as a spy for the British to defeat the Nazi agenda and secure her mother's protection. Jack Anderson is Katia's latest contact -- an American working for the British in deep cover as one of Himmler's henchmen, the fearsome Friedrich Reiter. The horrors Jack has experienced in order to maintain his cover have stolen his faith in God and humanity, and working with a beautiful, headstrong, and idealistic German contact does not fit into his plans. But in order to secure valuable intelligence, Katia and Jack must take the greatest risk of all -- a leap of faith in each other and the God they both thought had long-since abandoned them.

Dangerous Allies was a nice change of pace for me, a diverting slice of escapist fiction set during my favorite historical time period. In my experience with category romance, its rare to find European-set World War II spy stories, and Ryan has a bit of a flair for crafting characters that feel authentic to the time period, in that they are highly aware of the horrifying dangers facing them during this time period. With the bulk of the novel's action taking place over a 2-3 day time period, Ryan keeps the action moving at a brisk pace and develops a relatively believable romance between her two leads, considering the length constraints of the category romance format. That said, Jack's near constant self-loathing and Katia's obsessive angst grew rather tedious. There's too much time spent dissecting their emotional hang-ups, whereas devoting some of the novel's precious word count to developing their (rushed) relationship would've brought some balance to the storyline.

Ryan crafts an engaging enough historical that I'll definitely be on the lookout for future World War II-set titles. Dangerous Allies hints at an affinity for the time period that makes me hope Ryan gets the chance to write similar trade-length historical romances, where she'd have the luxury of developing her characters, storyline, and sense of time and place, resulting in a richer and less-rushed reading experience. A quick and diverting read!
Posted by Unknown at 5:58 PM

I just picked up this book the other day - the cover art is actually decent for a Steeple Hill novel: very intriguing and mysterious!

I am pleased to read it's an entertaining, quick read; sometimes those are best. =)

@Rissi - This is definitely one of Steeple Hill's better covers -- with the added bonus of the models actually resembling the characters! ;)

This one does get bogged down a bit towards the last third in Jack and Katia's "self-reflection," but overall I was pretty pleased! Hope you enjoy it!

If you enjoy WWII spy stories set in Europe, I highly recommend 'Zoo Station' and its sequels by David Downing. The fourth book, 'Potsdam Station,' I actually read before the others and I just keep coming back to it - the spy stuff is cool, but the story has a surprising emotional resonance too.

@Joni - Thanks for the book rec, I've not heard of that author!